There will be advertising on jerseys at the inaugural World Baseball Classic. Just don't look at the helmets and the sleeves of the United States team to find the ads. 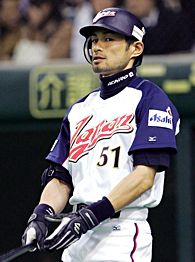 Five teams, including Japan, China, Chinese Taipei, Venezuela and Panama, will have advertising on its uniforms when the round-robin tournament begins on Thursday night. Japan, China and Chinese Taipei will wear advertising for Asahi soft drinks on their jerseys. Venezuela will wear the logo of Maltin Polar malt beverage, while Panamanian players will wear Cable & Wireless Panama on their uniforms. The Japanese players will be the only team that will wear logos on their helmets -- video game company Konami has paid for the placement.

The money from the sponsorships will be put into the World Baseball Classic revenue pool, which will be distributed to the various baseball entities, professional leagues, National Federations and the International Baseball Federation.

In 2004, when the New York Yankees and the Tampa Bay Devil Rays played their opening two-game series in Japan, players on both teams wore the Ricoh logo on their uniform sleeves and batting helmets. Ricoh reportedly paid more than $10 million to Major League Baseball to sponsor the series.

Despite the potential to bring in an enormous amount of money, baseball commissioner Bud Selig has said that he doesn't envision that the league would approve of its teams selling advertising space on jerseys under his reign, which runs through the 2009 season.

Although soccer, rugby and cricket teams in Europe and Asia traditionally feature huge advertisements on jerseys, no major American sports league has logos on their jerseys, other than that of the team and the manufacturer. Little League teams have been wearing corporate logos sporting the brands of local companies for many years.

In the Caribbean Series, which concluded last month, baseball players on the winning Venezuela team sported Coca-Cola logos on the back of their jerseys and advertisements of Cantv's Movilnet, a Venezuelan-based telecommunications brand, on their sleeves and batting helmets.