SAN JUAN, Puerto Rico -- Even on the baseball diamond, Cuba can't escape the politics of its No. 1 fan, Fidel Castro. 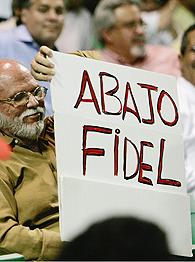 Members of the Cuban team at the World Baseball Classic complained about an anti-Castro sign displayed by a fan behind home plate during Cuba's 11-2 win over the Netherlands on Thursday night.

Cuba unsuccessfully tried to get the fan's sign removed, and in protest, the Cuban team did not participate in the post-game news conference.

Cuba and Puerto Rico are scheduled to play Friday, and WBC organizers expect the Cuban team will play. Both teams have already qualified for the second round of the tournament.

Pat Courtney, vice president of public relations for Major League Baseball, told ESPN "[The Cubans] feel they have done everything they can to play in the tournament, and they'd like this request [to remove the signs] honored, and it's upsetting to them ... but they have no recourse."

The first political eruption surrounding Cuba's participation in the WBC came before a single pitch was thrown.

But the baseball commissioner's office and the players' association reapplied Dec. 22 after Cuba said it would donate any profits it receives to victims of Hurricane Katrina -- a guarantee that the communist country would receive no financial profit from the event.

Puerto Rico officials had threatened not to host the opening rounds of the tournament if Cuba was not allowed to play.