ANAHEIM, Calif. (AP) -- Roger Clemens was looking for a much
better finish to his brilliant career.

Clemens pitched well Thursday night, but a lineup loaded with
All-Stars couldn't get the job done for the United States. 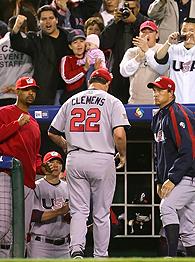 Oliver Perez and seven relievers combined to pitch a
three-hitter to lead Mexico past the Rocket and Team USA 2-1 on
Thursday night, eliminating the Americans from the inaugural World
Baseball Classic and putting Japan in the semifinals.

When it was over, Clemens implied that he had thrown his final
pitch.

"For me, right now, it's goodbye," he said in a brief
statement issued through Team USA. "I felt great tonight and my
body responded well. I'm very thankful for the opportunity to
participate in this event. It made all the work I did in the last
six weeks worthwhile."

Clemens, who has won 341 games and struck out 4,502 batters in
22 big-league seasons, wasn't at his best. The 43-year-old
right-hander allowed six hits and two runs in 4 1/3 innings with no
walks and four strikeouts. He threw 73 pitches -- seven below the
maximum for the second round.

Clemens was randomly chosen for a drug test after the game, ESPN has learned.


The outcome was a stunner, especially considering the offensive
firepower on the Americans' roster even without Derrek Lee and
Johnny Damon, sidelined with sore left shoulders.

"It's a tough bite to chew," catcher Michael Barrett said.
"The expectations on us to win and getting upset is a credit to
their style of play and their pitching. We put everything we had
into this in such a short time, and didn't get it done."

Korea had a 3-0 second-round record in Group One, with
Team USA, Japan and Mexico all going 1-2. Japan earned the second
semifinal berth from the group by allowing the fewest runs in games
between the tied teams.

Japan, which has already lost twice to Korea in the
Classic, faces its archrival in Saturday's second semifinal game in
San Diego, with the Dominican Republic meeting Cuba in the daytime
opener. The winners play Monday for the championship.

"You're never prepared for defeat. We always prepare to win,"
Team USA manager Buck Martinez said. "It's a disappointing loss,
for sure. We never really exploded with the bats.

"The quality of the pitching we saw in this tournament was
certainly much better than I expected on a consistent basis."

Martinez said Clemens didn't object to being removed from the
game.

"Rocket looked at me and looked fatigued," Martinez said. "He
says, 'What do you got out there?' That was a sign that he felt
like I did. We probably had a better shot with a fresh arm out
there."

Scot Shields entered with runners at first and third and one
out, and Jorge Cantu's grounder drove in what proved to be the
winning run.

"My perfect scenario would have been that I come in for Roger
and clean up his mess," Shields said. "I got the chance and I
didn't do it, and that hurts. That run that scored was the winning
run and it eliminated us. It's pretty hard to take."

Perez allowed only one hit in three scoreless innings, and the
Mexican bullpen retired 12 straight batters until Chipper Jones
drew a one-out walk off Jorge De La Rosa in the ninth. Luis Ayala
then walked Alex Rodriguez, but David Cortes needed only one pitch
to get Vernon Wells to ground into a game-ending double play.

"We came here to win, and that is how we performed this
evening," Mexico manager Paquin Estrada said through a translator.

Regarding Clemens, Estrada said: "He's a person that I respect,
and I've kept the lineup as a souvenir to this occasion."

Mexico took a 1-0 lead off Clemens in the third on a leadoff
double by Mario Valenzuela and a two-out single by Jorge Cantu.

But it wasn't that simple.

A television replay showed Valenzuela's fly ball hit the right
field foul pole at least 10 feet off the ground and bounced back
onto the field. However, first base umpire Bob Davidson didn't see
it that way, and Valenzuela wound up at second.

It was Davidson, umpiring behind the plate, who ruled that
Japan's Tsuyoshi Nishioka left third base early in the eighth
inning Sunday to negate a sacrifice fly that would have snapped a
3-3 tie in a game Team USA won.

The Americans tied it in the fourth off Francisco Campos when
Jones doubled, took third on a fly ball and scored on Wells'
sacrifice fly, barely beating right fielder Valenzuela's throw to
the plate.

Valenzuela opened the fifth with a single, took second on a
sacrifice and third on a single by Alfredo Amezaga before Shields
relieved and Cantu drove in the winning run.

"This was for Mexico, so everyone can know in our country --
everyone can know what we're doing here so we can leave here with
our heads held high," Cantu said, adding it was an honor to face
Clemens.

The Americans blew an opportunity against Edgar Gonzalez in the
top of the fifth, when Jeff Francoeur opened with a double and
Barrett was hit by a pitch. Francoeur strayed off second when
Michael Young squared to bunt, and was caught in a rundown.
Gonzalez then retired Young and Derek Jeter on ground balls to end
the inning.

Thanks to exceptional work by relievers Ricardo Rincon and Oscar
Villareal, Team USA wouldn't have another baserunner until the
ninth.

The game was played before an announced crowd of 38,284 at Angel
Stadium. Among those attending was commissioner Bud Selig, a
proponent of the Classic.

"The intensity has been just remarkable," Selig said. "In the
end, the beneficiary of all this will be baseball all over the
world. I mean, who knows, long after I'm gone, this event will be
big. But more importantly than this event will be big is what it's
going to do for baseball, including American baseball."