SAN DIEGO -- After falling short in their first two
meetings, Japan beat South Korea when it mattered most. 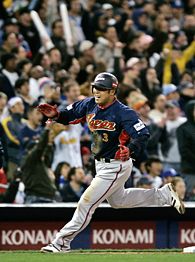 Byung-Hyun Kim gave up another big home run Saturday night, a two-run shot by pinch-hitter Kosuke Fukudome in the seventh inning that broke a scoreless tie and sent Japan to a 6-0 victory in the semifinals of the World Baseball Classic.

Koji Uehara pitched seven shutout innings for Japan, which will play Cuba for the championship Monday night at Petco Park. The Cubans advanced by beating the Dominican Republic 3-1 in the opener of a day-night doubleheader.

South Korea entered the nightcap as the WBC's only unbeaten team with a 6-0 record, going 3-0 in both qualifying rounds. Japan was 3-3, including a pair of one-run losses to the Koreans, and 1-2 in the second round.

"Tonight was not about skill. It was about putting all my heart
into the game. I know this is true -- not just for me, but for all
the players," Suzuki said through a translator. "In each game,
we've been playing better and better.

"Our hard work brought us this far. We haven't showed the whole
world what we're capable of yet. That's what we're going to do on
Monday."

Suzuki and reliever Akinori Otsuka, who pitched a scoreless
ninth, are the only major leaguers on the Japanese roster.

"This time, as a country, we couldn't lose it," said Otsuka,
formerly of the hometown San Diego Padres and now with the Texas
Rangers. "The United States lost and we got a really good chance,
so we had an unusual power inside us. That was a great game."

The Japanese reached the semifinals by winning a tiebreaker over
the United States and Mexico. They only got another crack at South
Korea because Mexico beat the Americans 2-1 Thursday in the last
game of the second round. 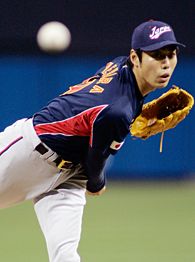 Nobuhiko Matsunaka doubled off losing pitcher Byung Doo Jun to start the seventh. Kim relieved and struck out Hitoshi Tamura before Fukudome hit a 1-1 pitch into the right-field seats.

Fukudome, batting for Toshiaki Imae, flipped his bat as he left
the box, certain the ball was gone. Fukudome came to the plate with
only two hits, including a homer, in 19 at-bats in the Classic.

Kim hit the next batter with his first pitch, prompting plate
umpire Ed Hickox to warn both benches.

Tamura opened the eighth with a solo homer off Young Soo Bae, connecting as a steady rain began to fall. A 45-minute rain delay
began one out later.

"Although we won twice over Japan, I believe their level of
game is perhaps better than ours," South Korea manager In Sik Kim
said. "I'm deeply grateful to our players. We had seven games, and
this is the first defeat we've experienced."

Kim was a two-time goat in the 2001 World Series while pitching for Arizona against the New York Yankees. He gave up a tying home run to Tino Martinez in the ninth inning and a game-winning shot to Derek Jeter in the 10th in Game 4, and another tying homer in the ninth to Scott Brosius in Game 5. The Diamondbacks came back to win the Series in seven games.

Uehara was brilliant, giving up only three hits while walking none and striking out eight before being relieved by Yasuhiko Yabuta to start the eighth. Uehara retired 13 straight batters during one stretch.

Yabuta and Otsuka each pitched one inning to complete the
shutout.

"We knew that Uehara was the best pitcher that Team Japan
had," South Korea's Jong Beom Lee said. "I think our team had a
little bit of problem with timing. I think our batting was somewhat
lacking. I think we will have more confidence next time."

Jun retired the side in order in the sixth before Japan blew the
game open. South Korea had given up only eight runs in 60 innings
entering the seventh.

The pro-Korean fans began banging their blue and white
Thunderstix as Seo delivered the first pitch. As was the case in
Anaheim on Wednesday night, when South Korea beat Japan 2-1, they
cheered every strike.

Suzuki was moved from the leadoff spot to third in the lineup.
He hit a two-out single and stole second in the first before
Matsunaka grounded out.

Lee doubled in the bottom half and went to third on a two-out
wild pitch, but Hee-Seop Choi grounded out. South Korea didn't get
another baserunner until Jin Man Park hit a two-out single in the
fifth.

Munenori Kawasaki doubled and Norichika Aoki walked with one out
in the Japan third, but Tsuyoshi Nishioka lined into a double play.

Suzuki singled and stole second again in the fourth, but Seo
retired the next three batters.