LAS VEGAS -- Daniel Cormier isn't sure if Jon Jones was rusty, struggling to adapt to new regulatory rules or unsure of himself for the first time in his career during his victory on Saturday at UFC 197.

But Cormier (17-1) knows one thing: The Jones who showed up against Ovince Saint Preux? Cormier said he beats that Jones every time.

"I wonder if this is the new Jon," Cormier said. "That guy that fought tonight? That guy does not beat me."

Cormier was supposed to welcome Jones back to the Octagon this weekend, but he was forced to withdraw three weeks ago with a leg injury. The two met when Jones was the reigning champion at UFC 182 in January 2015. Jones won that fight via unanimous decision.

Prior to Saturday, that was Jones' most recent fight. The 28-year-old was sidelined much of last year due to legal issues.

While he was away, the UFC partnered with United States Anti-Doping Agency (USADA) to administer a new anti-doping policy, and although he clearly stated he was not accusing Jones of using banned substances, Cormier said the changes implemented by USADA may have affected Jones' performance. Under the new guidelines, athletes are not allowed to rehydrate via IV after weighing in.

"I'm not accusing him of steroids, but he's a big guy, and rehydration is different now," Cormier said. "The IV [ban] changes the game. Even though he may have looked leaner tonight, was he too small because he couldn't rehydrate with the IV? How does his body feel rehydrating orally? Do his guys have the right formula to rehydrate for five rounds?

"And I saw him being a little tentative. He wasn't as sure of himself. That's what made him so great. He was so sure of everything he did. Even when he was doing crazy stuff like jumping guard against a guy like me, who has good top control. Just being able to let go like that, and this time he was processing things a lot more."

Cormier, 37, is scheduled to undergo an MRI on his leg injury on Monday. He says if the results are good, he will start to test his cardio and begin preparing for a potential fight against Jones at UFC 200 on July 9 in Las Vegas. 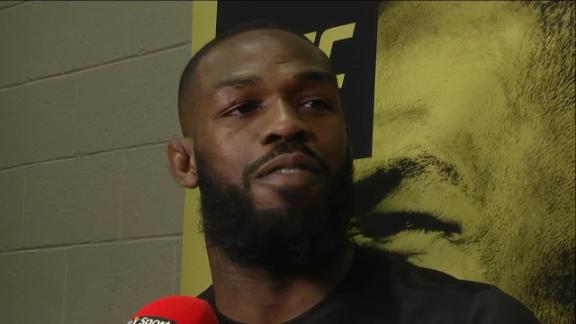 Jon Jones evaluates his performance in his victory over Ovince Saint Preux and says he would like to fight at UFC 200. Watch

UFC president Dana White told ESPN.com that the fight could potentially take place on that date; Jones, despite suffering from a bruised shin, said he wanted to headline the card. If Cormier has his way, he'll fight Jones twice -- on the two biggest cards of the year.

"UFC 200 is historic, as is Madison Square Garden [on Nov. 12]," Cormier said. "You have to understand, my plan, my outlook for this year is to beat Jones at 200 and fight again at MSG. The timing works perfect, just because if I were to fight him in July, it doesn't mean I can't compete later in November.

"[In 2015] I fought Jones in January, [Anthony Johnson] in May and [Alexander Gustafsson] in October. If I can fight those three guys over the course of 12 months, I'll be OK fighting twice in five or six months."