With over 20 years of fighting on his résumé, you might think Melvin Manhoef is near the end of his career and that his body has taken too much punishment from the battles he has endured in a variety of kickboxing and MMA promotions.

But if you ask Manhoef, 40, he would say you are wrong.

"The mind is young, the heart is young," Manhoef told ESPN.com. "The body feels very good, very young. The training camp that I have, I thought it was going to be very hard but it's like it motivated me."

Manhoef (30-12-1) will put that motivation to the test as he challenges Bellator middleweight champion Rafael Carvalho (12-1) on Friday in Boise, Idaho (Spike TV/ESPN Deportes, 9 p.m. ET).

Carvalho-Manhoef features two strikers with devastating knockout percentages (a combined 90.5 percent). Manhoef expects to be the fighter coming forward, looking for the win.

"I will put the pressure on and I will come forward, so I hope it's going to be falling on my side," he said. "It's going to be a hell of a fight and the people will enjoy it."

A fight involving Manhoef can end in a knockout at any time. The fighter known as "No Mercy" was stopped by Joe Schilling in November 2014 on a quick right-left combination. Three months later, Manhoef was knocked out again, this time on a spinning backfist from former champion Alexander Shlemenko, although the bout was later changed to a no contest when Shlemenko failed a drug test.

Manhoef snapped the two-fight skid last November against Hisaki Kato at Bellator 146. After a wild exchange, Manhoef put Kato down for good with a powerful left hook. The win breathed new life into Manhoef's MMA career. In fact, he says the victory gave him the spark he needed to get the title shot against Carvalho.

"This crown would mean so much to me. It will complete my fighting career," Manhoef said. 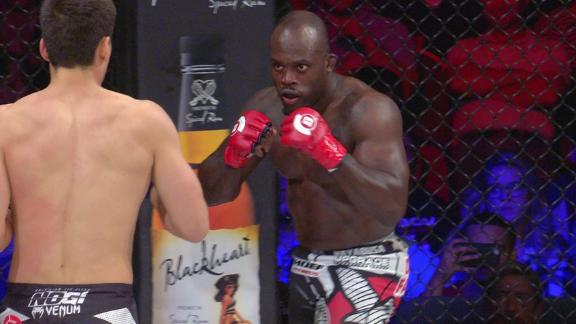 Carvalho captured the title last October at Bellator 144 with a second-round TKO against Brandon Halsey. In the opening round of the fight, Halsey used his wrestling prowess to keep the fight on the ground by twice mounting Carvalho. But the native of Brazil was able to weather the early storm and, one round later, stepped into a lightning-quick kick to the liver, causing Halsey to crumple to the canvas.

Manhoef hasn't held an MMA title since 2006, as the Cage Rage light heavyweight champion. But with Bellator gold at stake, Manhoef has remained focused in training camp, even celebrating his 40th birthday on May 11 with a trio of training sessions, leaving a little time to eat with his family in between. This has become routine for Manhoef, who has embraced a new approach for this camp by regularly training three to four times per day.

"I think I had one of the best training camps ever. I've never felt so strong," he said. "I did everything that is in my power to win this fight. I trained hard. I dedicated myself. I'm well prepared. I feel perfect."