BRISTOL, Conn. -- Brock Lesnar isn't in his element right now. He's wearing a suit as he sits in a green room on ESPN's campus in between SportsCenter interviews, and he's trying to find a microwave to heat up a cup of vegetable soup. If he had it his way, he would be sitting on his tractor in his farm in Moosomin, Saskatchewan, but that would be too easy and Lesnar doesn't like doing things easily -- well, at least not yet anyway.

"I didn't want to be sitting on my tractor 20 years from now wondering, 'God, I wonder if I would have just fought one more time?'" Lesnar said. "So I'm going to take care of that speculation right now and when I'm sitting on my tractor 20 years and I can say, 'Now that was fun.' It takes some balls man. It takes some balls to live life to the fullest. Who in the hell would do this? I'm fortunate. I really am. It takes big balls to do this, but I've always stuck my neck out there. You just lay it on the line."

Lesnar had originally retired from mixed martial arts in March 2015 when he was contemplating a return to the UFC before eventually re-signing with the WWE. He had previously retired from the sport after losing to Alistair Overeem on Dec. 30, 2011, which was his last UFC fight. But Lesnar realized fairly quickly that he had closed the door too soon.

"When I made the decision I wasn't sure it was the right decision, but I was making the decision based upon a number of different evaluations at the time," Lesnar said. "Really, it was either fight in the UFC or fight in the WWE. There wasn't the option of both. That was a key factor. What am I going to do? I didn't want to juggle two careers anyway. It just felt right in this moment in my life to be involved in this one."

Lesnar, who is still under contract to WWE for another year and a half, didn't want to get into the specifics of his UFC deal and how he worked with WWE to allow him to fight Mark Hunt at UFC 200 on July 9 in Las Vegas. He did say, however, that his return has been in the works for months and he is happy with the resolution. After UFC 200, Lesnar will return to WWE and wrestle at SummerSlam on Aug. 21 in Brooklyn, New York.

"I think both companies see that it's not going to hurt," Lesnar said. "We're not going to devalue either one. It's actually win-win for everybody as long as I do win, and I have all intentions of doing so. I'm going to train to win. There are lots of risks, but without risks, there's no reward. I think the reward is bigger than the risk."

Of course it could easily turn into a lose-lose proposition if Hunt, who knocked out two-time UFC heavyweight champion Frank Mir last March in the first round, knocks out Lesnar in the first round as well. It would effectively end any long-term comeback attempt and make it slightly harder to rebuild his "beast incarnate" persona before he headlines SummerSlam one month later. But Lesnar doesn't anticipate that being a problem.

"Is there going to be some ring rust? Are you out of your f---ing mind? Of course there is," Lesnar said. "But maybe Mark Hunt can knock it out of me in the first 10 seconds and then he's going to get his ass whooped."

If Lesnar does what he intends to do and takes care of Hunt impressively, it's hard to imagine his UFC return being a "one-off opportunity" as WWE described it in its news release. Lesnar didn't close the door on fighting another fight or going back to the UFC on a more regular basis after his WWE contract is up.

"It boils down to me -- if I want it or not," Lesnar said. "But let's worry about one thing at a time and knock on wood everything comes together and I get into the Octagon and I'm healthy and Mark's healthy and we can put on a good performance."

With this newfound partnership between WWE and UFC for at least one night, there is some growing optimism that this could be a sign of things to come in the future. Perhaps UFC stars such as Conor McGregor, who has hinted at joining WWE in the past, or Ronda Rousey, who got in the ring at WrestleMania 31 last year, could have their own "one-off" matches in WWE. Former WWE champion CM Punk, who left the company and signed with the UFC in 2014, is expected to make his debut in the Octagon later this year. Lesnar, however, scoffed at the idea of opening doors for others.

"There will never be another Brock Lesnar," he said. "You can make all the correlations you want to the people you just stated, but none of them have ever main-evented and sold pay-per-views and put asses in the seats like Brock Lesnar. There is nobody. That's why this is happening." 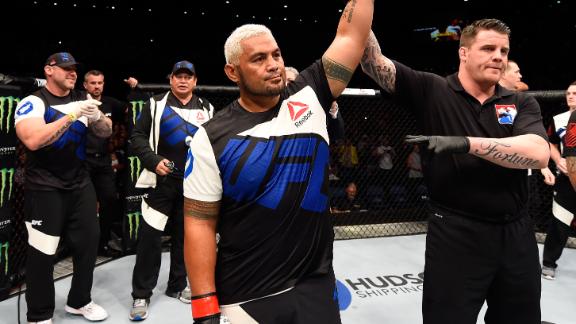 UFC heavyweight Mark Hunt has a knockout résumé that's among the best in MMA. He will face Brock Lesnar at UFC 200. Watch

This, of course, is UFC 200, arguably the company's biggest pay-per-view event since UFC 100, which was headlined by Lesnar beating Mir to unify the UFC heavyweight championship seven years ago. Lesnar's return on a night as big as this for the UFC is no coincidence.

"It's a big event. I wouldn't want to return at UFC 192," Lesnar said. "What's the meaning in that? It's UFC 200. It's a milestone for the company and a milestone for the athletes, so why not be on that card? Life's all about timing. The timing for this is working out perfect. I don't know why or how, but somehow I always find a way where the timing is right and I land on my feet."

As much as Lesnar enjoys being in WWE and looks forward to putting on a show against whomever he faces at SummerSlam, there was something he said was missing when not being able to step into the Octagon. He missed training and competing for a fight that didn't have a scripted outcome.

"I missed the competition," said Lesnar, who lost his last two fights after multiple bouts with diverticulitis, an intestinal disorder. "That's the hardest thing for guys -- every athlete will tell you that after they leave sports. ... I had the surgery and it was removed and I don't have any diverticulitis in me. It's gone It has taken a number of years to feel good again. For Christ's sake it's been how many years since I've been in the Octagon? It's been a long time, but I'm back now."

Lesnar turns 39 next month, and his contract with WWE will expire not long after he turns 40 next year. He and his wife, Rena, who WWE fans will remember as Sable, have two sons. Turk turned 7 last week, and Duke turns 6 next month. Lesnar also has 14-year old twins, a son Luke and a daughter Mya, from a previous relationship. He has occasionally thought about retiring to his Canadian farm after his contract is up and enjoying more time with his wife, kids and tractors but concedes that's a decision he has not made yet and might not truly make even after he makes it.

"I don't know what's going to happen," Lesnar said. "I have a year and half left on my contract with WWE. My kids are getting older, and I've had a hell of a run. We'll see what happens. I'll never say never. Even when I retired I said, 'Man, I hope I'm not going to have to eat my words on that.' I don't really want it to be over and so here we are again."