It was a complete, one-sided beating -- downright hard to watch at times. In other words, it was a Cyborg fight.

To the surprise of no one, Cris "Cyborg" Justino dominated promotional newcomer Lina Lansberg via second-round TKO on Saturday. The 140-pound catchweight headlined UFC Fight Night in Brasilia, Brazil.

The fight ended at 2:29 of the second round, when Justino (17-1) took Lansberg down and landed a series of hard elbows and right hands to bring in referee Mario Yamasaki. It was the 15th knockout of Justino's career and her second win in the UFC.

"I knew she had good Muay Thai and wanted to keep the fight standing," Justino said. "So I took her down and showed my ground work."

Lansberg (6-2), a former professional kickboxer, became the first Justino opponent since 2013 to survive the first round, though that was all it was: survival. Justino welcomed the clinch position from the opening bell, which was somewhat surprising, given Lansberg's abilities in that area. Cyborg's physical strength was obvious, however, as she kept Lansberg on the fence and hurt her with right hands and knees to the body.

With less than two minutes left in the first round, Justino scored her first takedown and quickly moved into full mount. Lansberg, who fights out of Sweden, did what she could to tie Justino up and limit the damage. In the second round, she ate a right hand that badly swelled her left eye.

Despite the loss, Lansberg will remain in the UFC as a 135-pound fighter.

"I thought I would do a little better," Lansberg said. "I've been following [Justino] for years. Thank you so much, Cris."

Originally from Brazil and now fighting out of Huntington Beach, California, Justino is still the 145-pound featherweight champion for all-female promotion Invicta FC. The UFC has not announced any future plans to create a female featherweight weight class, which leaves Justino's future somewhat unclear.

She struggled to make the 140-pound catchweight limit but has said she's interested in superfights with the sport's bigger names.

"I already have two belts at home," Justino said. "I want to put on superfights for my fans and make them happy."

Former bantamweight champion Renan Barao (34-4) got in the win column in his new weight class by defeating Phillipe Nover (11-7-1) via unanimous decision (30-27, 39-28, 39-28). Barao kept Nover guessing on his feet and secured multiple takedowns in the final round to seal the win. It was his first win since December 2014 and first in the UFC 145-pound division.

Barao, 29, out-landed Nover in total strikes 76-53, according to Fightmetric. He worked his usual leg kicks and scored a few hard left hands after slipping under Nover punches. A spinning head kick connected in the second round, which drew a smile from Nover. He also scored four total takedowns.

It was not a head-turning performance by the former champ, who has struggled ever since losing his 135-pound title to T.J. Dillashaw in May 2014. He never appeared to hurt Nover in the fight. He did, however, appear more settled in his new weight class.

The win snapped a two-fight skid.

Nelson finishes Silva in Round 2 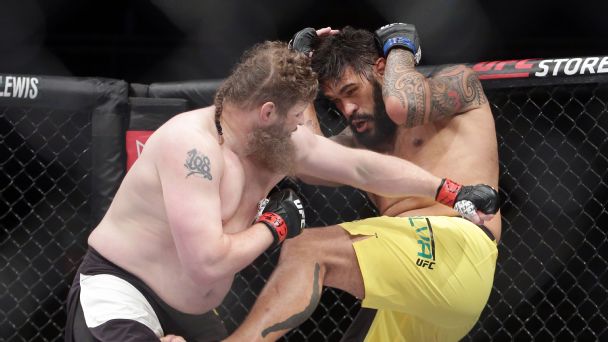 UFC heavyweight Roy Nelson finishes Antonio Silva in two rounds, then kicks the referee to express his displeasure for how long it took to stop the fight. Watch

Heavyweight Roy Nelson (22-13) picked up his 14th career knockout, as he dropped Antonio Silva (19-10-1) with a right uppercut and then finished him with punches at 4:10 of the second round. Referee John McCarthy gave Silva an opportunity to recover, but Nelson stood over him and landed three or four hard right hands.

After the fight, Nelson walked away in disgust before circling back and throwing out a light kick toward McCarthy, whom he felt waited too long to stop the fight.