Where: Phones 4U Arena in Manchester, England
When: Saturday
TV: PPV, 10 p.m. ET

Each week, Brett Okamoto provides his take on the hottest topics in the world of mixed martial arts. He's joined this week by UFC middleweight Derek Brunson. Brunson (18-3) will face Robert Whittaker on Nov. 26 at UFC Fight Night in Melbourne, Australia.

1. Interim UFC featherweight champion Jose Aldo has requested a release from the UFC, citing a lack of respect from the promotion. Should the UFC grant his release?

Brunson: You know what? Jose Aldo is probably one of my favorite fighters of all time, but I do not side with him on this one. If he was complaining about wanting more money, that's different. But you've got a guy who held the belt and lost it -- I'm not really big on instant rematches. I think you should win a couple fights. It always depends on how your division looks but ... I think it's worse for guys like Frankie Edgar. Edgar went on a roll and steamed like five or six guys in a row. He had a title shot, but Conor [McGregor] wanted to go up a weight class. Frankie was like, "OK, I'm not sitting around for a year." He fought Aldo and loses a close decision. That wasn't fair to him. If anybody should be complaining, it's Frankie. Guys want to fight Jose. Sometimes you just have to handle your business. It seems like he just wants that belt back, and I think if he were to beat Max Holloway, boom, he'd get his title shot.

Okamoto: Hard question to answer in a short space, but there's two sides to this, really. I can easily understand why Aldo feels the UFC has disrespected him in the past. When he pulled out of a fight against McGregor last year at UFC 189, the promotion sort of hung him out to dry, basically accusing him of exaggerating the injury. Dana White has criticized him for not finishing more of his one-sided fights. He says the UFC lied to him about a McGregor rematch, which I wouldn't find shocking if proven true. At the same time, as Derek points out, the timing of his demand seems very, very much linked to McGregor. And if Aldo is mad that he doesn't have the same leverage as McGregor, he partially has himself to blame. I'm not saying he needs to be something he's not and trash-talk the way McGregor does, but there's a reason McGregor is able to push boundaries Aldo never did.

2. UFC's Alex Oliveira scored a controversial win over lightweight Will Brooks last weekend, after coming in 5.5 pounds overweight. What should the penalty be for missing weight that badly?

Brunson: I think 20 percent of a guy's purse going to his opponent is good for maybe, like, 2 pounds. As you start going up more, it should start raising the percentage. Something like 30 percent for 3 pounds, 50 percent for 4. Five pounds? That's a lot. You know what weight you're contracted at. If you miss by that much, 5 pounds might be too much to even let them fight. If I had been Will Brooks, I wouldn't have fought. That's just ridiculous and unprofessional. That's almost a different weight class. Look at the fight. The guy was pressing him against the cage. That guy was strong and that much stronger with those 5 pounds.

Okamoto: I think Derek just laid out a pretty perfect plan. Because as it is, there's really not THAT much of a deterrent to continue to cut if you have a pretty good idea you won't make it. In other words, if I know I'm missing weight and the penalty is the same whether it's 2 pounds or 5, I'm probably leaning 5, right? So creating tiers of how much is forfeited based on how much you're over is a good idea. And anything above 5? Call the fight. As a promotion or commission, take that decision out of the fighter's hands who did make weight. Because they'll always elect to fight. It's too hard to turn it down. Take away that pressure and make the decision for them. And pay them too, which the UFC is pretty good about.

3. Match-make the UFC's bantamweight division and -- looking even further down the line -- predict who will hold the title at the end of 2017.

Brunson: That's a crazy division. That belt is going to switch hands a lot. I would make Dominick Cruz vs. Cody Garbrandt. Then I'd make John Lineker vs. Bryan Caraway. I think both those guys are deserving of a big matchup. The winner of Caraway-Lineker gets a title shot. You've got [T.J.] Dillashaw kind of sitting out there, it's tough. Like I said, I don't like instant rematches. If you had the belt and lose it, I think you need to win a couple fights. Because you've got other guys working for a title shot, and if the second fight between the top two is good, then you're going to feel like you need to do a third. As far as who's holding it at the end of next year, I've got to go with Cody Garbrandt.

Okamoto: I know the people want Cruz vs. Garbrandt. That's what the masses are calling for. But to me, you have to give Dillashaw this fight. I'm still not convinced Dillashaw lost to Cruz when they met in the beginning of the year. I've watched that fight multiple times -- and it's one of the most even fights I've ever seen in the Octagon. To deny Dillashaw a rematch after a fight that close -- AND after he went on to take a tough matchup against Raphael Assuncao at UFC 200 -- I just don't see how you do that. Once upon a time, Garbrandt was supposed to fight Lineker. I think that is an absolute money fight. Put that on the same card as Cruz vs. Dillashaw II. And champion at the end of 2017? Wow, that's tough. Cruz.

4. Who's had a better career: Michael Bisping or Dan Henderson?

Brunson: Bisping's been steady for all these years, but Henderson has been around and been able to stay and compete at a high level against younger generations who looked up and idolized him. I guess I'd have to go with Henderson. He won belts in Pride and Strikeforce. Now he's going for the UFC belt. Yeah, I'd have to go with Dan Henderson. 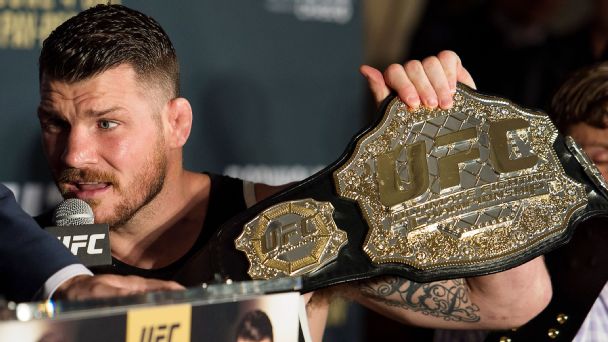 UFC middleweight champion Michael Bisping says that Dan Henderson had an unfair advantage in their first fight back in 2009, because Henderson was on testosterone replacement therapy. Watch

Okamoto: This question sure got a lot harder to answer in 2016. I mean, you still have to give a small edge to Henderson -- but Bisping has more years left and we'll see what the answer is after those. Hendo is pioneer status. He's fought the greatest fighters of two generations. The middleweight Pride champion during his prime years. The Strikeforce era in which he beat Fedor Emelianenko. Fight of the Year candidate against Mauricio "Shogun" Rua in 2011. The man has fought the best of the best for nearly 20 years. I don't think it takes away anything from Bisping, who will go down as a legend in his own right, to say Hendo has him slightly beat at this point in their respective careers.

5. Following UFC 204, who is next in line for a shot at the middleweight championship?

Brunson: Derek Brunson, of course [laughs]. The middleweight division needs new blood. You've got [Ronaldo "Jacare" Souza], he's everyone's front-runner for a title shot. He's fighting Luke Rockhold. Realistically, the next title shot will probably come out of that fight, but Jacare is only on a one-fight win streak. Yoel Romero beat Jacare, but then Romero popped for [performance-enhancing drugs]. So it's kind of like Jacare is only on a one-fight win streak and Romero popped for PEDs. Do you reward them for that? Romero is my only loss, and I was winning that fight until the end.

Okamoto: I agree with Derek: It has to be the winner of that Nov. 19 showdown between Rockhold and Souza. The perception is Rockhold slipped on a banana peel when he lost to Bisping in June. Souza has certainly done everything one could ask for to get a title shot, and a win over Rockhold would thoroughly cement his status as a No. 1 contender. The winner of a Nov. 12 fight at UFC 205 between Chris Weidman and Romero is in play as well, but I still lean toward the Rockhold/Souza winner. All four will be trying to make a statement that month, that's for sure.