The UFC will return to its roots in Las Vegas for the first time this year for UFC 209. Two title fights will headline the event, with a main card that also offers some established stars, and some potential budding ones. And while there's no lack of striking skills that will be on display, the type of strengths each fighter possesses can be quite specific and different from their opponents.

So it's worth checking the performance metrics to understand each fighter's tendencies, and how that might influence the matchup. Which fighters are best in class at each strength?

How the graph works

This balloon (or bubble) chart includes the fighters competing this weekend with sufficient sample size. Many of them will move with more cage time, but it's a good snapshot of how they've performed to date.

The four metrics in the graph are related to offensive striking. First, the vertical axis is the power head-striking accuracy. This is a general reflection of a striker's skill level in technique. But some fighters are more aggressive than others, while some are primarily counter-strikers, and those characteristics lead to very different striking styles. So the horizontal axis indicates the ratio of strike attempts while standing compared to the same fighter's opponents. It's a measure of output, and a proxy for aggression. An even 1.0 ratio means a fighter matches the pace of his or her opponents when standing and trading, while a higher number shows more aggressive and higher-volume strikers compared to lower ratios that indicate counter-strikers.

The dots are plotted based on those two metrics, but two more variables are also shown. The size of the bubble is based on the fighter's knockdown rate in the UFC/Strikeforce/WEC. Bigger bubbles mean more power, while the small specks indicate fighters who haven't logged a distance knockdown in recorded competition. And lastly, southpaw/switch-stance strikers are in red. Unorthodox strikers are rare, but are worth highlighting as some fighters have trouble with southpaws. 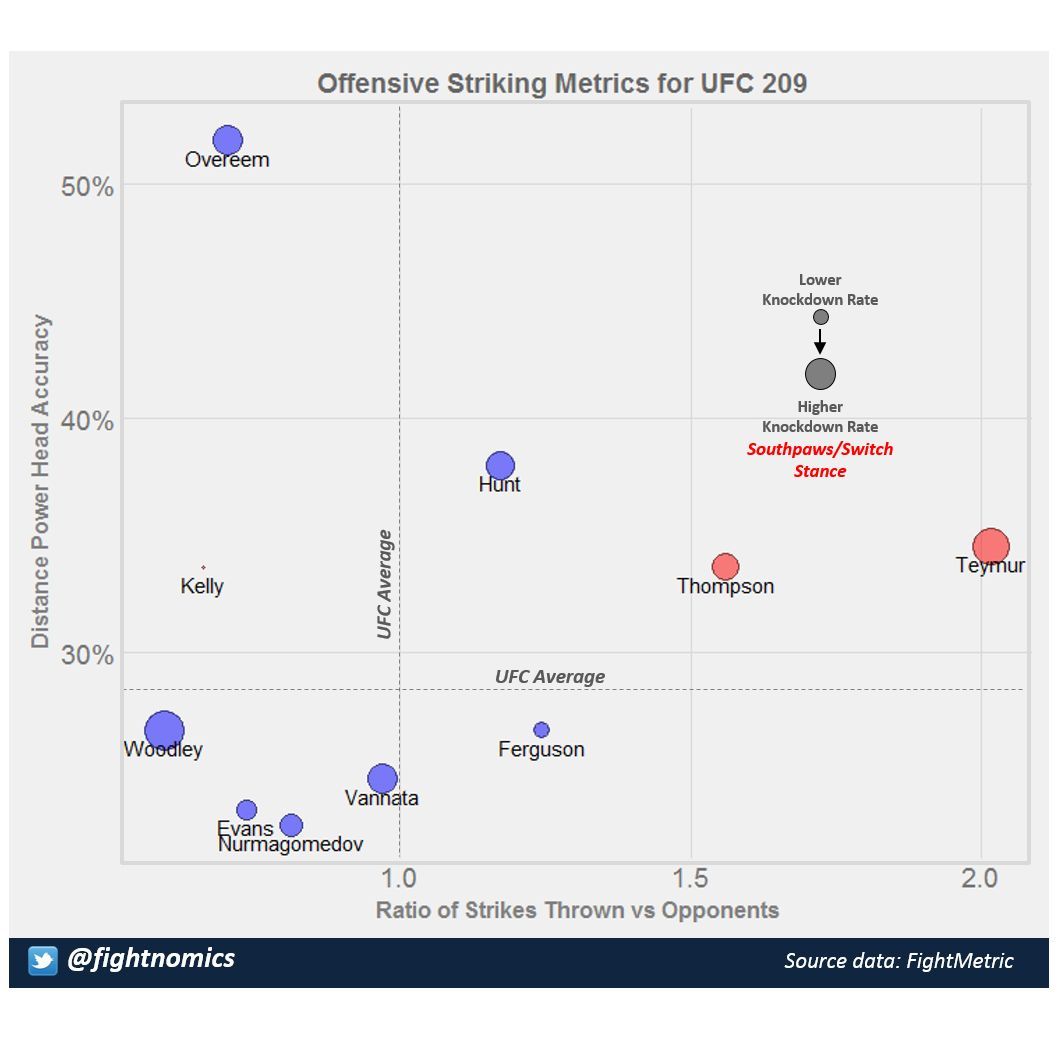 Heavyweight Alistair Overeem has the highest power-striking accuracy of any UFC fighter with sufficient sample size. Landing 52% of every power head strike he throws from a distance, Overeem is a threat to finish a fight with just about every punch. But one reason for his accuracy is that he has a very reserved pace. He lets opponents do more work, and only fires about half the strikes that he faces in return. That tradeoff works when he can wait for the right opportunity, yet it presents a risk when faces a similarly experienced striker. At heavyweight, much more so than other divisions, you only need to land one clean shot to alter the course of a fight.

And so it's interesting that Overeem will be facing another striking specialist with above average accuracy and power in Mark Hunt. Hunt ranks second in terms of accuracy on the main card. It's very likely that these two will choose to stand and trade leather, and the tradeoff will be Overeem's precision versus Hunt's more aggressive pace and better durability. The betting odds are torn on this matchup, for good reason.

And it's no surprise to see Stephen "Wonderboy" Thompson in the upper-right quadrant of the graph, performing above average in every one of these striking metrics. Thompson's excellent career in kickboxing is the primary basis of his fighting style in MMA, using a wide stance to launch precise and diverse long-range attacks. It's perhaps more impressive that he achieves this rate of accuracy while relying so heavily on kicks rather than punches. In the game of "hit, and don't get hit," Thompson is the most efficient striker in the entire welterweight division in terms of out-pointing his opponents.

Honorable mention goes to lightweight David Teymur. Although only two fights into his UFC career (both TKO wins), so far he's shown very effective distance striking. His pairing against Lando Vannata, another skilled striker, should be a fun long-range duel.

Teymur leads the fighters on the card by being the most active striker against opponents, having literally doubled their output. Perhaps more surprising is that he's put on this pace while using very few jabs, swinging with power 82% of the time, and using a high mix of leg kicks. We'll be interested to see if this trend continues, as his opponent this weekend in Vannata actually averages an even higher pure rate of strikes attempted per minute, but did so against more active opponents, which evened out his ratio.

Of fighters with more reliable sample size, Wonderboy Thompson takes the lead for his very controlling distance striking game. Opponents have trouble closing the distance against his rangy style, and he not only initiates exchanges, but makes everyone pay with his precise counters when opponents try to come forward. His striking style is quite a contrast to that of Tyron Woodley, making their exchanges that much more interesting.

Woodley isn't just the hardest hitter at UFC209, he's the hardest hitter in the entire welterweight division. He drops opponents once for every eight distance power head strikes he lands. That's a remarkable rate that has generated knockdowns in many of his UFC appearances, including in his first fight against Thompson. While he's generally a hesitant striker, when Woodley pulls the trigger, he's always a threat with his power.

Teymur and Vannata are both off to good starts with their power, but with more reliable sample size, heavyweights Overeem and Hunt both pack lots of heat. Overeem's seven knockdowns scored occurred at a slightly higher rate than Hunt's eight knockdowns, but obviously either man is fully capable of a fight-ending strike if he lands cleanly first.

Keeping it on the ground!

Lightweight Khabib Nurmagomedov may not execute the best standup game, but it doesn't matter when he's smothering opponents on the mat. He attempts 1.5 takedowns for every minute that he spends standing, which means he normally doesn't stay standing for long. He controls opponents on the ground more often than any fighter on the main card by a longshot, which will likely be the game plan against Tony Ferguson.