The UFC Mexico City main event finish turned an entertaining evening into a tumultuous one. After just 15 seconds, the featherweight bout between Jeremy Stephens and Yair Rodriguez was ruled a no contest.

Rodriguez landed an eye poke on Stephens during an early exchange, and after a five-minute recovery period, Stephens was unable to continue. The ringside physician and referee Herb Dean called the bout off. When the decision was made to end the fight, the fans in attendance at Mexico City Arena threw garbage into the Octagon and booed heavily. Stephens was escorted from the area. Rodriguez was visibly angry and briefly scuffled with security guards before calming down and apologizing. It was an ugly scene that marred a very exciting event.

Our panel is here to break down everything that went down Saturday night in Mexico.

Rodriguez unsure of how to feel after no contest

Yair Rodriguez says he doesn't know how to feel after his fight vs. Jeremy Stephens was ruled a no contest due to an eye poke. For more UFC, sign up here for ESPN+ http://plus.espn.com/ufc.

Just 15 seconds into the main event, Rodriguez went for a leg kick on Stephens. Rodriguez seemed to attempt to get distance after the kick by pushing away with his left hand. Instead, the hand dragged down onto Stephens' face and a finger went in Stephens' left eye. Stephens was noticeably affected, and referee Dean immediately paused the action to look at the eye.

When Dean checked on him, Stephens was unable to open his left eye at all. Dean then tried to pry the eye open himself with his hand and was unsuccessful. The ringside physician was then called into the Octagon to inspect Stephens. Dean told the doctor that Stephens' eye was likely spasming, would relax eventually and he'd be able to open it. Dean then told the doctor that Stephens had five minutes to recover from the poke. 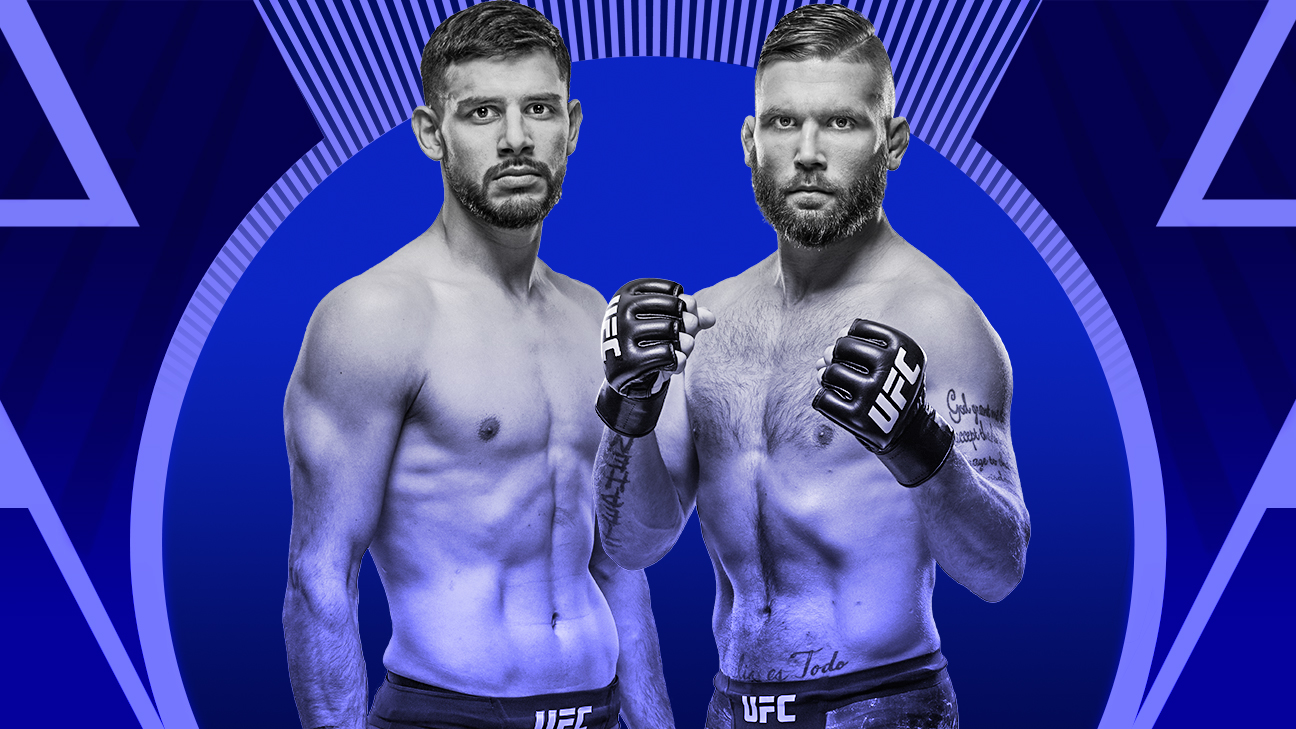 Every fight from UFC Fight Night: Rodriguez vs. Stephens is available to watch on ESPN+.

After five minutes, the doctor came back into the Octagon and Stephens still could not open his eye. The doctor advised Dean to call off the bout, which he did. Dean ruled it a no contest.

A referee can allow a fighter up to five minutes of recovery at their discretion following any foul other than a low blow, according to referee (and referee trainer) Rob Hinds. On a low blow, the fighter gets the full five minutes and can return to the bout at any time up to that five minutes.

"Herb handled it perfectly all the way through," Hinds told ESPN.

At UFC 235 in March, Dean ruled that Jon Jones' illegal knee on a grounded Anthony Smith was an intentional foul. Had Smith been unable to continue, the bout would have been ruled a disqualification, Smith would have won and he would have become the new UFC light heavyweight champion. But Smith continued on and lost a unanimous decision. Dean took two points from Jones for the infraction. -- Marc Raimondi

Fighters react to Rodriguez vs. Stephens

As one might expect, UFC fighters weighed in on the Rodriguez-Stephens no contest. Here are a few of their tweets.

Ppl saying Stephens wanted out of the fight?? He is one of the toughest and most dangerous guy in that division. I highly doubt he faked how severe that eye-poke affected him. I felt Yair would our point him with kicks, but tn we won't get to find out...Sucks. #UFCMexico

1000%! It's the equivalent of getting kicked in the nuts. Each one is a different feel. Some much worse than others. Or even KOs! Some leave you with vertigo symptoms and some leave you with no immediate symptoms. https://t.co/EiQj0z0sAI

Ive never heard of an eye lid spasm, can a doctor weigh in???

😳 One of them freak accidents. Sucks but eye scratches ain't no joke! I have a scar in one of my eyes! 🤕🤧 #letsrunitbacklater #mmacrazy #fighterssacrifice https://t.co/bBwH0A0mMC

Yair Rodriguez, featherweight
Result: No contest at :15 of first round
Next: Stephens

Before the UFC booked him against Stephens in Mexico City, there was some talk about other opponents for Rodriguez. Zabit Magomedsharipov was a potential option, as was Brian Ortega. Those are still good options. But the No. 1 option now is Stephens. It would feel strange to see him move on to someone else from this.

Jeremy Stephens, featherweight
Result: No contest at :15 of the first round
Next: Rodriguez

As bad as you feel for Rodriguez -- losing the opportunity to really perform in his home country -- you probably feel even worse for Stephens. He was the one who got poked, for starters. Hopefully there was no serious damage done to his eye. The concern starts there. Beyond that, Stephens told ESPN he invested $30,000 and six weeks in Mexico into this camp. Because the fight ended in a no contest, Stephens is not contractually owed his win bonus. Perhaps the UFC would pay it, given the circumstances.

This was a good fight for Stephens, and the rematch now has a backstory.

The UFC seems to enjoy booking Esparza against rising contenders with a lot of potential. They did it with Cynthia Calvillo in 2017. Tatiana Suarez in 2018. And now Grasso in 2019. And you know what, they kind of did it back in 2014 with Rose Namajunas (of course, technically that wasn't UFC matchmaking. Namajunas and Esparza advanced to the finals of The Ultimate Fighter reality series that year). Anyway, Saturday was certainly not the first time Esparza took on a potential budding darling of the strawweight division.

Most wins in women's strawweight history

And she deserves credit for winning this one. I know there was some disagreement over the scorecards, but the fight was close and all three judges had Esparza winning two rounds (one of them gave Grasso a 10-8 in the third, which is what resulted in the majority decision). Whether you completely agreed with the scoring or not, it wasn't a robbery and the UFC should treat it as a win in Esparza's future matchmaking. It seems like a decent time for a rematch of the first-ever UFC strawweight title fight.

Alexa Grasso appears to sink in an armbar, but Carla Esparza is able to maneuver her way free. For more UFC, sign up here for ESPN+ http://plus.espn.com/ufc.

Grasso lost (and you have to wonder how much sleep she'll lose over her decision to not press Esparza more on the feet after hurting her in the third round), but there was a lot to like in the 26-year-old's performance Saturday. It's very clear to me Grasso has not reached her full potential yet, and that's exciting. She's developing new skills, and she's maturing mentally and physically. The ceiling is still very high, and she already has six UFC fights worth of experience under her belt.

Torres is still relatively highly ranked, despite a four-fight skid. You might think it's crazy to pair Grasso with an opponent on that kind of slide, but keep in mind Torres' losses have come to Jessica Andrade, Joanna Jedrzejczyk, Zhang Weili and Marina Rodriguez. That's a 115-pound murderer's row if there's ever been one. Torres will test Grasso, which is really what she needs. More tests. -- Brett Okamoto

That was a tremendous fight. I scored it 29-28 for Esparza. I thought she won the first two rounds, and Grasso very clearly won the third. If this were Pride FC rules, where they scored the fight on the totality of damage rather than round by round, Grasso would have won.

This was a really tough fight for Grasso, and I was surprised they put her against someone as tough as Esparza in Mexico, considering they want to build her up in her home country. Nevertheless, it's another reminder of just how tough Esparza is. The former champ is always a hard out. It's also a reminder of how good Tatiana Suarez is (remember she TKO'd Esparza last year), but that's a different topic for a different day.

I don't think Grasso's stock dropped in this fight. On the contrary, I think she showed improvement and did better than I thought she would against a former strawweight champion. -- Ariel Helwani

Who/what impressed you the most?

Late in Round 2, Brandon Moreno excites the crowd in Mexico City by hitting Askar Askarov with a head kick. For more UFC, sign up here for ESPN+ http://plus.espn.com/ufc.

Okamoto: Brandon Moreno. When the UFC started dropping flyweights in 2018, its decision to release Moreno was one of the more disappointing (and surprising) ones. Here's an exciting, young kid from Mexico (an area the UFC is constantly looking to expand in), and the promotion parts ways with him?

It was good to see Moreno back in the Octagon, where I feel he belongs, and his performance on Saturday impressed me. He ended up with a split draw, but I thought he won the fight. Askar Askarov is not well known, but he's a tough opponent and was the betting favorite. I thought Moreno showed a little bit of everything in this one: he came back from a slow start, showcased strong defensive grappling, nearly knocked Askarov out with a left head kick in the second round. I felt Moreno deserved the win, and he stood out to me.

Helwani: Lots to choose from here, but I have to go with Steven Peterson. Any time you can land just the seventh spinning backfist knockout in UFC history, especially as a counter, you get my vote. Honorable mention goes to Irene Aldana who completely dominated Vanessa Melo from start to finish. That was one of her best performances in the UFC.

Marc Raimondi: It might finally be time for Sergio Pettis to realize his incredible potential. The younger brother of Anthony, the former UFC lightweight champ, was impressive in a unanimous decision win over Tyson Nam on Saturday night. Pettis has bounced back and forth between flyweight and bantamweight several times during his UFC career. It seems like he has finally settled now on flyweight and he can truly be a force in that division, as he showed in Mexico City.