Stevie Ray walked into Singapore Indoor Stadium on Saturday having dropped three of his last four fights. The first two rounds of his UFC Fight Night co-main event against Michael Johnson were tightly contested and could have been scored either way.

"So I came out strong in the third round thinking maybe it was one each," said Ray, who took the fight to the canvas, secured dominant position and threatened submissions until the final horn. That late push was enough to earn him a majority decision at Kallang, Singapore. 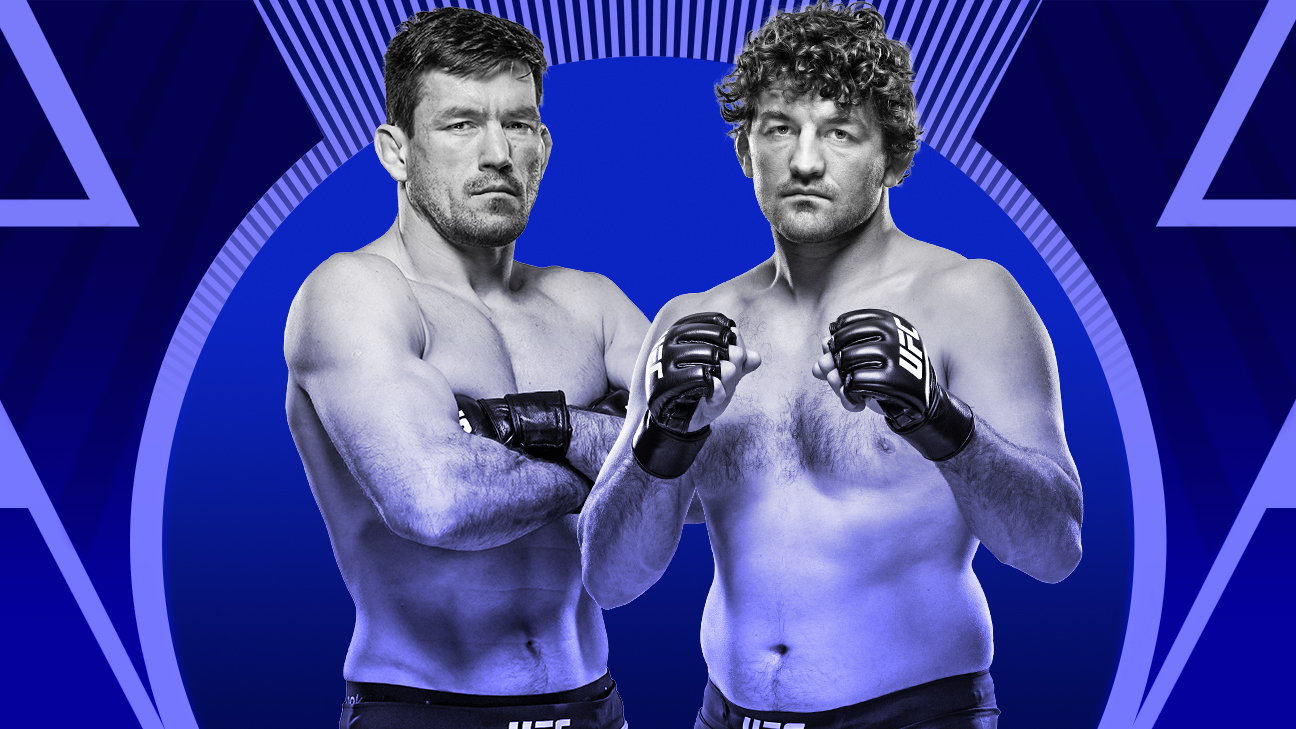 Every fight from UFC Fight Night: Askren vs. Maia is available to watch on ESPN+.

For Johnson (20-15), it was a stinging loss in his return to lightweight after a three-fight run at featherweight, where he won two of three but missed weight in his last bout at 145 pounds.

Ray started strongly, carrying the early standup action. But Johnson eventually got into a flow on the feet, and by the end of Round 2 he had cut up Ray's face in several places. The fight was swinging his way -- until Ray swung it back.

"Everybody doubted me," the Scotsman said. "I know a lot of people doubted me. I hope that fight, I was able to show you what I'm really made of."

Camacho never got out of the starting gate. Dariush shut the gate and locked it, putting Camacho on his heels from the start with a crisp flow of straight punch combinations and body kicks, then exploding for a takedown, seizing back position and securing a rear-naked choke to force the tapout at 2:02 of Round 1.

Going in, this matchup appeared to be striker vs. grappler, with Dariush (17-4-1) the latter based on his seven previous submission wins. But he came out with a relentless standup attack, never allowing Camacho (22-8, with 17 of those wins coming by knockout) to get his offense going. UFC Stats credited Camacho, a 30-year-old out of Guam, with just nine strike attempts, three of which landed. Dariush hit the mark with 13 of the 19 strikes he threw.

Dariush, 30, who was born in Iran and fights out of Kings MMA in California, won his third straight. Camacho has lost three of four.

Late in Round 1, Ciryl Gane levels Don'Tale Mayes with a flying knee and continues to punch until the bell. For more UFC, sign up here for ESPN+ http://plus.espn.com/ufc.

What a "wow!" performance by Gane, who peppered Mayes with practically every standup technique he threw for the fight's first 14½ minutes. At that point, Gane then took Mayes down, and instead of riding out a dominant decision victory, he secured a heel hook to elicit the tapout at 4:46 of Round 3 -- the latest submission in UFC heavyweight history, according to ESPN Stats & Information.

That's two UFC fights for the French kickboxer and two submission wins. He choked out Raphael Pessoa in August.

Gane, 29, is just 5-0 in MMA, but he fights with the poise of a veteran. He was fully in control of distance, always out of range of Mayes' biggest offensive attempts, while close enough to stalk his opponent and land big shots of his own, particularly body kicks that hurt Mayes and had the crowd going "Oooh!" throughout.

Gane was landing every technique in his arsenal, and near the end of Round 1 his flying knee floored Maye against the cage. Gane swooped in with fists and elbows, but the horn sounded before he could finish.

Salikhov unleashes flurry in second round

Muslim Salikhov tees off on Laureano Staropoli in Round 2 with a bevy of kicks, knees and punches. For more UFC, sign up here for ESPN+ http://plus.espn.com/ufc.

Salikhov showed off the efficiently damaging kicks and straight punches that earned him the nickname "King of Kung Fu," getting the better of a flashy striking battle to end Starapoli's seven-fight winning streak and handing the Argentine his first defeat since 2013.

Salikhov (16-2), a 35-year-old kickboxing champion from Dagestan, landed the stronger strikes throughout, using lightning-quick spinning attacks to counter the wilder offense of Starapoli (9-2). Midway through Round 2, Salikhov hurt his opponent with an uppercut and swarmed in with a flurry of strikes against the cage. Starapoli survived to the horn, but his right eye was showing damage and he was slowed the rest of the way.

Two judges scored the bout 30-26 and the other had it 29-28. The unanimous decision represented the third straight victory for Salikhov, who had not yet gone the distance in the UFC.

"I'm happy that I got one more win. I tried to finish the fight, but he was tough," said Salikhov. "I think it's good to get a win by decision sometimes, not always by knockout; it's good for the future, because in the future I may have a much more tough opponent. It's a good experience. This guy was a really good striker, but I think I'm a different level.

"My opponent did some things that were unique, different, that I've never seen before. When I punched him, his head was low. I've never had any sparring partners like that. So maybe I wasn't ready for that and couldn't catch him. Next, I want Li Jingliang."

Salikhov landed 55 significant strikes, his most in a UFC bout, according to ESPN Stats & Information, while Starapoli landed 30, by far his fewest in the promotion.

You just had to know the judges were going to have a difference in opinion on this one. It was back-and-forth the whole way, with Yoder seizing advantageous positions on the canvas in all three rounds and Markos working her way back to her feet each time and landing impactful strikes -- lots of them.

In the end, all three judges scored the bout 29-28, two of them giving it to Markos (10-7), the Iraq-born Canadian who is known for her wrestling, but in this fight showed off her striking combinations and the power behind them.

"I'm honestly not too happy with my performance," Markos said. "I understand why they call her the Spider Monkey. Definitely. I didn't do what I wanted to, but I came out with the victory and I'm happy about that.

Yoder (7-5), 32, who saw her two-fight winning streak end, felt those Markos punches early on before shooting a takedown and turning the Round 1 tide her way. She did the same in the second round, absorbing punches until she could get the fight to the canvas, where she dropped some punishing elbows.

But Markos kept working to get the fight back to standing, and once it was there, she got busy. Markos landed 76 significant strikes (to Yoder's 42), which according to ESPN Stats & Information were her most since 2016.

Both men ended up bloodied after this action-filled three-round battle. Fiziev earned his first career UFC victory as the judges scored this bout in his favor, 30-27, 30-27 and 29-28.

"I feel amazing because I won," Fiziev said. "Everyone in my country, Kyrgyzstan, Azerbaijan, my family, my team supported me, so I won because I had them. I don't want to say anything big, but I want more fights now. Next year I want to fight every three months."

Evloev moved to 12-0 in his career (2-0 in the UFC) with a strong showing against Barzola. The two featherweights traded big shots during a fight of the night contender.

"It was a tough fight, I had to show my heart, but I enjoyed all three rounds," said Evloev. "I hope the win against such an experienced opponent who has so many wins in UFC will give me the opportunity to fight someone from the top fifteen. Overall I'm happy, but I didn't do everything that I prepared to do. So in the next fight I'm going to solve my mistakes and show a more exciting fight."

According to UFC Stats, Evloev landed four takedowns in Saturday's fight and five in his first UFC fight earlier this year. Evloev is now the only UFC featherweight in 2019 to have multiple fights with four or more takedowns.

Pavlovich landed a number of big right hands to knock down Greene and force referee Herb Dean to stop the fight early in the first round.

"I came here to do fast work and go home," Pavlovich said. "I've been here two weeks already. I don't think about the future, I'm just happy to win here."

Pavlovich is now 14-1 in his MMA career, with 11 of those wins coming via a first-round finish.

Lookboonmee became the first fighter from Thailand to step into the Octagon and pulled out the split-decision win, with two judges scoring the fight 30-27. The third just scored the fight 29-28 for Albu.

"I'm proud and happy, but I'm not overly excited about my performance," Lookboonmee said. "I felt a little bit slow and I wasn't as active as I wanted to be in the Octagon. For the next fight, I'm going to be doing a lot more fitness, because I'm the only female fighter in UFC without a six-pack!"

All three judges scored this fight 30-27 in favor of Pessoa, who dominated Hughes for most of the bout and was able to score a key knockdown in the second round.

"I feel great, I did everything I wanted to do in every single round," Pessoa said. "I think I showed that heavyweights can have a lot of speed and a lot of momentum. We can be like the lighter weight classes. We're heavy, but we're fast."

This is Pessoa's first career UFC win. He lost in his previous fight, his UFC debut, to Ciryl Gane via submission on Aug. 10.