The name Nurmagomedov carries some weight in the UFC, and on Saturday a cousin of undefeated lightweight champion Khabib tried to add to the family's success story.

It did not work out so well for Abubakar Nurmagomedov.

Nurmagomedov, making his UFC debut during the prelims of the Zabit Magomedsharipov vs. Calvin Kattar UFC Fight Night card at CSKA Arena in Moscow, was submitted in the first round by German welterweight David Zawada. 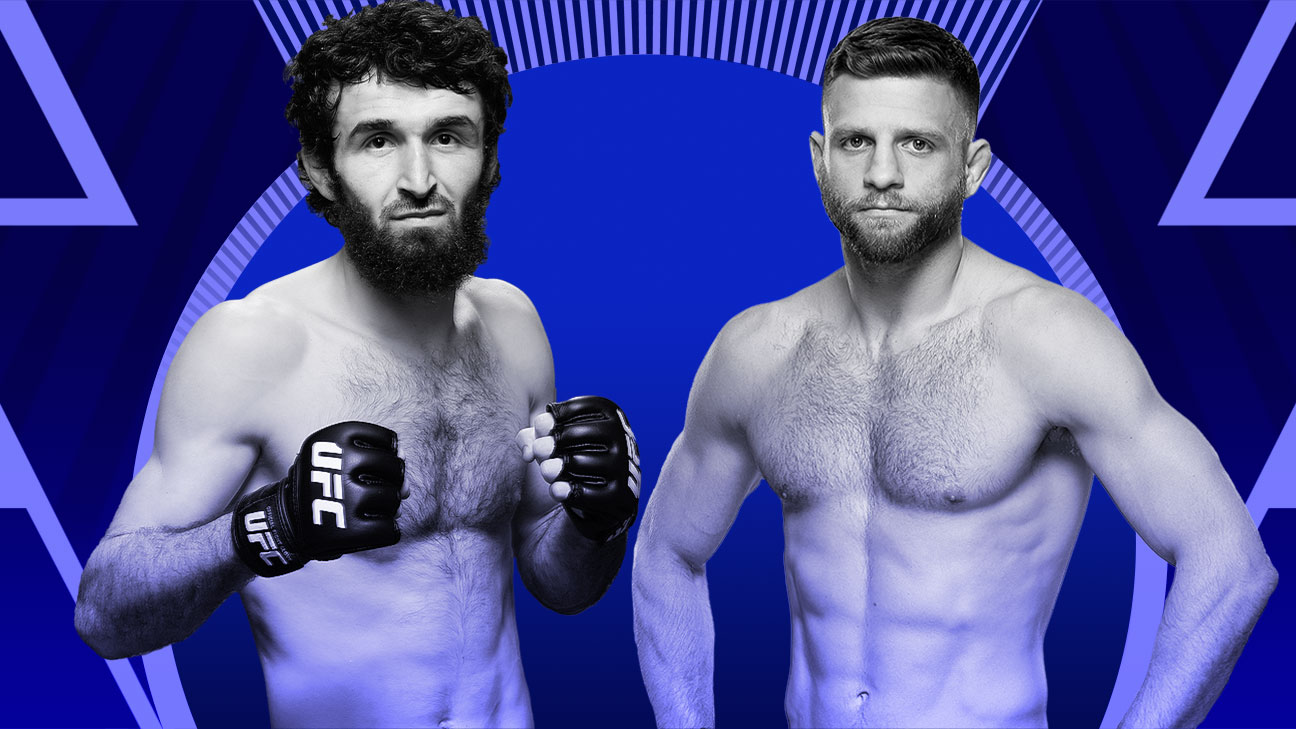 Every fight from UFC Fight Night: Zabit vs. Kattar is available to watch on ESPN+.

The fight started in typical Nurmagomedov fashion, with Abubakar getting a takedown within the first minute. He briefly advanced to half guard but Zawada defended well, working his way back to full guard and landing punches to the head and body of the Dagestani from bottom position. Then, in an instant, Zawada secured a triangle choke, switched to an armbar for moment, then went back to the triangle to elicit the tapout at 2:50 of Round 1.

"I know he's a good wrestler, like his cousin Khabib. So I was prepared," said Zawada (17-5), who had lost his first two UFC bouts. "I am very comfortable from my back. ... The triangle was very tight. I connected also with some punches, because it's not grappling, it's MMA."

Despite this being the UFC debut for Nurmagomedov (15-3-1), it was not his first time inside the Octagon. On Oct. 6, 2018, Abubakar cornered Khabib for his title defense against Conor McGregor. After Khabib finished the Irishman with a fourth-round submission, Khabib leapt over the cage to attack one of McGregor's cornermen. McGregor then tried to leap out of the cage as well, and Abubakar, who had entered along with UFC officials and others, attempted to exit over the fence as well. As Conor and Abubakar were sitting on top of the cage, held back by security, McGregor took a swing at the Dagestani and they exchanged blows before being separated. Abubakar was fined $25,000 by the Nevada State Athletic Commission and suspended for a year.

McGregor took note of Saturday's result, tweeting, "Nurmagotaptap." He also tweeted, "1 quitter exposed," adding that Abubakar is "Forever a failure," among other things. McGregor later deleted all of the tweets pertaining to the fight.

Zawada, on the other hand, was sportsmanlike in victory, saying he felt no added pressure in taking on a fighter with a high-profile name. "It's no pressure, you know, because names [do] not fight," said the 29-year-old from Dusseldorf. "I respect him. They are sportsmen. Khabib, he's a very nice champion, and his cousin, also a very nice guy."

Abubakar had last competed in October 2018, when he fought to a draw with Bojan Velickovic in the PFL playoff quarterfinals. Nurmagomedov injured his hand in the fight and did not advance to the semifinals. The 29-year-old Nurmagomedov was bronze medalist at the 2014 Combat Sambo World Championships.

Zawada earned one of the performance-of-the-night bonuses.

Volkov wears down Hardy in Round 3

Alexander Volkov is able to wear down Greg Hardy in Round 3 with multiple strikes to the body. For more UFC, sign up here for ESPN+ http://plus.espn.com/ufc.

Roberts showed a veteran's savvy the whole way against the 24-year-old Imadaev, getting the better of standup exchanges right to the finish, which came when a counter left hand flattened the Moscow-based fighter at 4:54 of Round 2 and silenced the hometown crowd.

Imadaev was able to take the fight to the canvas on a few occasions, but he never was able to control Roberts. And every time the fighters got back to their feet, they were in Roberts' world. He had quicker and more accurate hands, which Imadaev eventually learned the hard way.

Roberts, 32, who fights out of Liverpool, England, ended a two-fight losing streak while handing Imadaev his second straight UFC defeat after he had started his career 7-0 in regional promotions.

Herman finds success vs. Ibragimov in Round 2

Ed Herman is able to find success with a couple of knees to Khadis Ibragimov's face, then a right hook. For more UFC, sign up here for ESPN+ http://plus.espn.com/ufc.

It was a smashing performance by the 39-year-old Herman, who has been with the UFC since 2006 -- Season 3 of "The Ultimate Fighter" -- and was in his 23rd appearance with the promotion. In handing Ibragimov his second straight loss after an 8-0 start to his career, Herman neutralized the 24-year-old powerhouse from Dagestan by steering clear of most of his big shots and inflicting the majority of the damage himself.

He bloodied Ibragimov's nose early and later opened a gash on his forehead, both of which bothered the younger fighter.

Ibragimov threw everything with power and did connect with some punches that slowed Herman's advances, but the American got the better of most exchanges and did some of his best work in the clinch to earn two 30-27 scorecards along with a 29-28. Herman has always been known as "Short Fuse," but on this night his most fitting moniker would be "Smart Fighter."

"I was trying to be a bit smarter and not take so many big shots, but I knew it was going to be a war," Herman said. "He's a brawler and I'm a sucker for a good brawl."

Martin gets the takedown on Emeev

Anthony Rocco Martin is able to get Ramazan Emeev on the mat during Round 1. For more UFC, sign up here for ESPN+ http://plus.espn.com/ufc.

Martin forced a fast pace upon Emeev, immobilized his lower leg with kicks and handed the Dagestani his first loss in his past eight bouts. Two judges scored it 29-28 for the American and the third had it 30-27.

In the end, the judges were left with this decision: Was the badly swollen left calf of Emeev, which absorbed a barrage of kicks, worse than the bloody nose inflicted on Martin by Emeev's straight jabs?

Martin was the stalker for most of the way, coming out aggressively in the first round before settling into boxing range. He fended off many of Emeev's takedown attempts, and when he did end up on his back, he threatened with kimuras and other submissions. Martin was by no means dominant, but he led the dance while inflicting more damage, enough to win his fifth fight in his past six.

Gamzatov lands multiple punches in Round 3

Shamil Gamzatov is able to land multiple punches on Klidson Abreu in Round 3. For more UFC, sign up here for ESPN+ http://plus.espn.com/ufc.

Gamzatov remained unbeaten in his UFC debut, using a strong third round to sway two of the judges.

Gamzatov, a grappler out of Dagestan, and Abreu, a jiu-jitsu black belt from Brazil, contested the majority of this bout on their feet, with Gamzatov doing most of the stalking and landing leg kicks to maintain range. Abreu did get the fight to the mat to control Round 2, but the other two rounds saw the fighters trading blows mostly from distance, with neither man inflicting significant damage.

In the third round, Gamzatov landed an overhand right that sent Abreu backward, and the Dagestani began to stalk the Brazilian. But when Gamzatov missed with a big punch, Abreu secured a clinch and nearly was able to take the fight back to the canvas. Gamzatov fended off the takedown, however, which might have sewn up the decision.

Ankalaev lands some offense in Round 1

Magomed Ankalaev is able to land a kick and then a punch on Dalcha Lungiambula in Round 1. For more UFC, sign up here for ESPN+ http://plus.espn.com/ufc.

Ankalaev earned one of the performance-of-the-night bonuses.

Rustam Khabilov is able to get Sergey Khandozhko to the mat multiple times in Round 2 at UFC Fight Night. For more UFC, sign up here for ESPN+ http://plus.espn.com/ufc.

Roberson lands multiple kicks on Kopylov in Round 2

Karl Roberson finds success and lands multiple kicks on Roman Kopylov in Round 2. For more UFC, sign up here for ESPN+ http://plus.espn.com/ufc.

Roberts lands punches on Yakovlev in Round 1

Roosevelt Roberts comes out firing, landing multiple punches on Alexander Yakovlev in Round 1 at UFC Fight Night. For more UFC, sign up here for ESPN+ http://plus.espn.com/ufc.

Kianzad lands punches on Clark in round 2

Pannie Kianzad is able to land multiple punches on Jessica-Rose Clark in Round 2 in the early prelims of UFC Fight Night. For more UFC, sign up here for ESPN+ http://plus.espn.com/ufc.

From ESPN Stats & Info: It was Kianzad's first win in the UFC while Clark lost her UFC debut at bantamweight.

Grant takes down Popov early in Round 1

Davey Grant is able to take down Grigorii Popov in Round 1 in the early prelims of UFC Fight Night. For more UFC, sign up here for ESPN+ http://plus.espn.com/ufc.

From ESPN Stats & Info: Popov is now 0-2 in UFC after having won nine consecutive fights before joining the promotion. It's also Popov's first loss by decision in his career.