Aleksandar Rakic's march is over. It's hard to march -- or even walk or stand -- on a grotesquely swollen leg.

The Austrian light heavyweight had won 12 fights in a row going into Saturday's co-main event of UFC Fight Night in Busan, South Korea. But Volkan Oezdemir put a stop to that run by eking out a split-decision victory built largely on his leg kicks, which by midway through Round 1 had left a huge hematoma on Rakic's left leg.

"He's a tall guy, so he keeps his stance really wide," Oezdemir said. "So I know the kicks are always there." 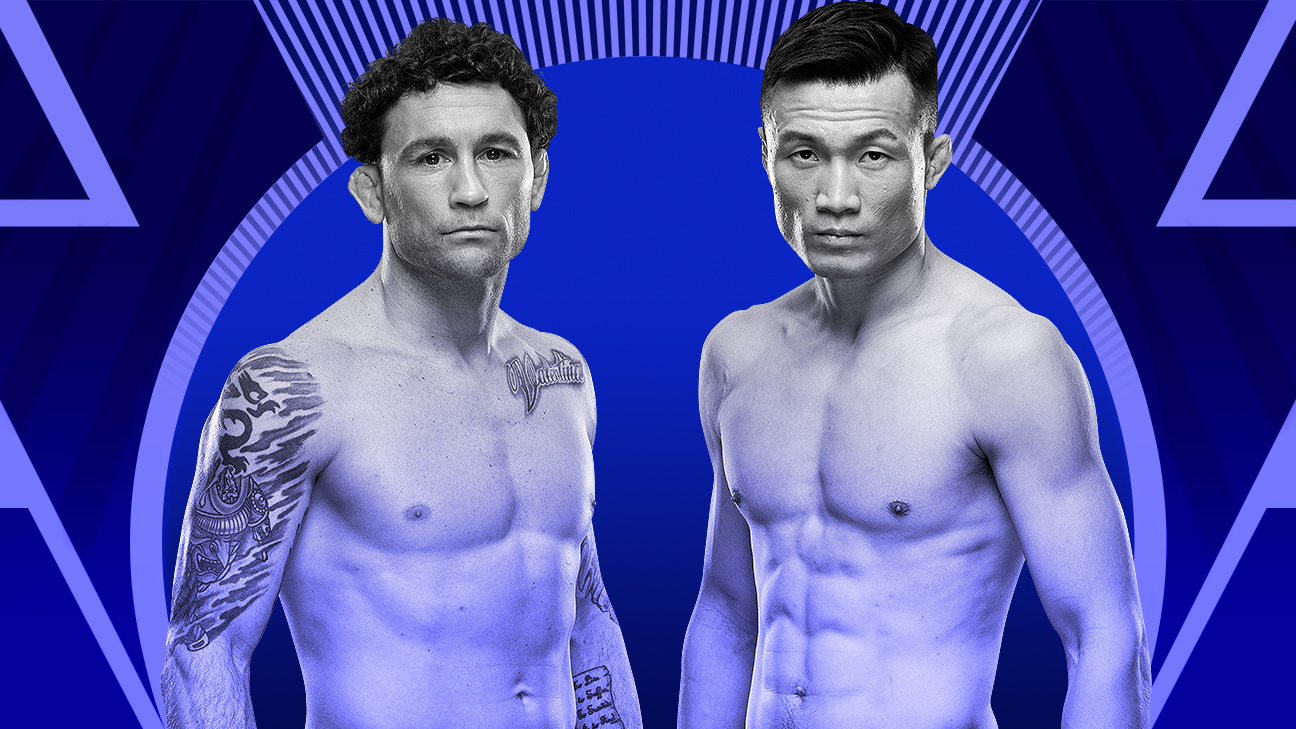 All fights from UFC Fight Night: Egdar vs. Korean Zombie are available to watch on ESPN+.

Then, after targeting this night's opponent, he set his sights on not one but two more. First he called out Dominick Reyes, who challenges Jon Jones for the light heavyweight belt on Feb. 8. Then he said he wants to fight Anthony Smith.

The Reyes callout was most urgent, as "The Devastator" defeated him in March.

"I've been on the wrong side of a decision already, in my last fight, with Dominick Reyes," Oezdemir said. "And now, for Reyes, I'm going to let him do his thing [in the title challenge], you know? And once he comes back, I'm going to wait for him."

Rakic, who had not lost since his pro debut in 2011, was being groomed as a title contender. But Oezdemir was the toughest opponent he had faced, and it showed. Concern for Oezdemir's power and Rakic's own hampered movement made him less aggressive than usual.

It was only a matter of time before someone fell, the way these two fighters were throwing leather. When it finally happened, the crowd's gasp and then its silence told the story, as Jourdain became the first fighter of the night to finish a South Korean.

It was the first UFC win for Jourdain, who lost in his promotional debut in May. The Quebec fighter was a wild man in the cage, and early on his aggression did not pay off. Choi, who even at age 28 still has the baby face to live up to his "Korean Superboy" nickname, was showing poise and patience in dodging much of what Jourdain threw and then making him pay.

But in the final seconds of Round 1, Jourdain landed big in the midst of a forward-moving flurry, and even though he didn't get a finish at that point, he seemed emboldened.

Jourdain came out aggressively again in the second round, and this time he was landing. So was Choi, though, and every time he connected, the crowd exploded. But the building fell into silence late in the round when Jourdain beat the South Korean to the punch, countering an uppercut with a straight left hand that stunned Choi, then finishing him with a right.

Choi has lost three in a row, although he had not fought in nearly two years because of military obligations that will continue after this night.

From ESPN Stats & Information: Jourdain has 10 finishes in his 10 wins. He has won five of his last six fights, including three by KO/TKO. Jourdain cashed as a +250 betting underdog. Choi's last fight prior to Saturday came in January 2018 against Jeremy Stephens.

The fans clearly were expecting big things from Jung, who came in riding an 11-fight winning streak. They roared the first time he threw a punch, even though he missed. But it didn't take long for the South Korean light heavyweight to give the crowd a legitimate reason to get noisy.

After a couple of uneventful exchanges from distance, Jung timed a lazy Rodriguez jab and countered with a potent right hand that floored the Massachusetts fighter, then swarmed him for a quick KO finish at 1:04 of Round 1. Along with this being his 12th straight win, it was his seventh straight finish. He is 2-0 in the UFC.

Rodriguez lost for the second time in four UFC fights, with one of the other appearances being a no contest.

From ESPN Stats & Information: This was the 12th career finish for Jung in his 13 wins (10th by KO/TKO) and his fifth career first-round finish. Jung, who cashed as a -110 betting underdog, hasn't lost since October 2015.

Park fought with the urgency of someone not willing to squander the sweet opportunity of getting his first UFC victory in front of his countrymen. He was relentless in both the standup and grappling, bloodying Barriault before the first round was over and remaining a step ahead the whole way.

Park, who had won seven fights in a row before dropping his UFC debut in August, was all over the fighter from Quebec whenever they locked up in clinches along the cage. And when they were in the center of the cage duking it out, Park used smooth movement and crisp punches from distance to keep Barriault off of him.

Barriault kept chasing and chasing, never cutting off the cage on Park, and as a result he was unable to land any of the bombs he threw. He lost all three of his UFC outings.

Fighting in his hometown, Kang was a bloody mess at the final horn. Optics aside, though, he was dominant practically from start to finish, although one judge saw the fight differently, making it a split-decision win for the South Korean, his third win in a row.

Kang took Liu to the canvas in the opening seconds of both the first and second rounds, and he kept him there for all but about 30 seconds of those 10 minutes. Liu was able to maintain full guard and avoid any submission threats from Kang, who came in with 11 career subs. But the Chinese fighter was unable to get the fight back to standing, other than briefly in Round 2.

In the third round, the good news for Liu was that he defended Kang's first three takedown attempts, but the bad news was he ended up on his back anyway. When he sprung backward to avoid a head kick, he lost his balance and ended up on the canvas, where he remained until the end of the fight. Although he was active with elbows from the bottom and opened a cut on Kang's face, Liu was on his way to his second straight loss after a nine-fight winning streak.

From ESPN Stats & Information: Kang won for the sixth time in his past seven fights. Kang, who has won four fights by decision, earned his third split-decision win. Kang is now 4-1 since returning from his South Korean military service in 2018. Liu lost his second straight fight in 2019 after winning his first two UFC fights in 2018.

Gane didn't get the finish, but his stock continues to rise. Gane held a 74-37 edge in strikes, according to UFC Stats, and blanked Boser on all three scorecards in remaining unbeaten.

From ESPN Stats & Information: Gane, the biggest favorite on the card at -600, earned the first decision win of his career. He became the 17th fighter and second heavyweight along with another rookie, Jairzinho Rozenstruik, to go 3-0 or better in the UFC in 2019. Boser's two-fight win streak came to an end. Five of his six losses have come by decision.

Choi had a point taken away for grabbing the fence in the first round, but that didn't matter. Choi held a 123-33 edge in significant strikes, according to UFC Stats, and won 29-26 on two of the judges' scorecards and 29-25 on the other. The victory was the first in the UFC for Choi.

From ESPN Stats & Information: The win was Choi's third by decision. Choi landed just 49 significant strikes in his first two UFC fights combined. Mokhtarian has lost consecutive fights in the UFC after starting his career 8-0 outside the promotion.

Morales, making his UFC debut, took Ma's hometown crowd out of the fight, controlling the first two rounds. He delivered the exclamation point with a kick that caught Ma flush on the right side of his face two minutes into Round 3, sending him to the mat. That blow didn't finish Ma, but it put the final touches on a convincing win for Morales, who remained undefeated.

From ESPN Stats & Information: The win was Morales' second by decision. Debuting fighters finished with a record of 58-76-2, 2 NC in 2019 for a win percentage of .420. That's the lowest win percentage for debuting fighters since 2016 (.390). Ma lost his third consecutive bout and dropped to 3-5 in the UFC. This was his first loss by decision since August 2010. According to UFC Stats, Morales outlanded Ma 32-15 in significant strikes and 60-21 in total strikes.

After Pantoja, ranked fourth at flyweight by the UFC and Schnell touched gloves, both fighters engaged in wild exchanges for much of the first four minutes of the first round. Not long after, Pantoja caught the ninth-ranked Schnell with a straight right, knocking out his teammate from The Ultimate Fighter 24 at 4:17.

From ESPN Stats & Information: Pantoja won his fourth fight in his past five with the eighth KO/TKO of his career. Pantoja tied Deiveson Figueiredo for the most flyweight wins since 2017 with six. Schnell's four-fight win streak was snapped in what was the ninth first-round finish of Pantoja's career. Brazilian fighters finished the night 3-0 (Lemos, Barcelos and Pantoja), but 2019 marks the first time since 2010 that Brazilian fighters finished the calendar year with a record under .500 (84-96-2, 1 NC).

Barcelos captured a close fight, one where both fighters entered on seven-fight win streaks.

From ESPN Stats & Information: Barcelos moved to 4-0 in the UFC and extended his overall win streak to eight. The Brazilian fighter has not suffered defeat since April 2014. Barcelos won his fifth fight by decision and cashed as a -105 betting underdog.

Lemos took the back of Granger after some ground and pound and finished the fight at 3 minutes, 43 seconds in the first round with a rear-naked choke.

From ESPN Stats & Information: Lemos scored her second career submission win and got her first UFC win. Six of Lemos' seven wins have come in the first round. Lemos cashed as a +175 betting underdog. Granger lost her first professional MMA fight. She was one of three undefeated fighters entering Saturday's card.

Heili moved to 2-0 in the UFC and extended his win streak to four.

From ESPN Stats & Information: It was the seventh career win by decision and second consecutive for Alatengheili, who was a slight -110 betting underdog to Benoit's -120. This was Benoit's first fight since November 2017. He hasn't won consecutive bouts since 2012, alternating wins and losses in his past 10 bouts.