Miesha Tate silently nodded to herself as she watched Amanda Nunes fight Cris Cyborg. None of what she saw was unexpected -- she experienced it herself.

Cyborg charged forward, winging hard punches. But Nunes dropped her with a short right hand while Nunes' back was against the fence. Cyborg came forward and Nunes put her down again with a looping overhand right.

Compromised, but still fighting, Cyborg continued to throw big shots. Nunes calmly came over the top with another right hand and it was over. Just like that, Nunes had knocked out Cyborg in the first round to win the featherweight title at UFC 232 on Dec. 29, 2018.

UFC 250 is scheduled to feature Amanda Nunes' first featherweight title defense, as the two-division champ takes on Felicia Spencer in the main event. Also on the card is a critical matchup in the bantamweight division between top contenders Aljamain Sterling and Cory Sandhagen, while rising prospect Sean O'Malley returns to action.

That final punch sent Cyborg spiraling to the mat and cemented Nunes as the greatest women's MMA fighter of all time. "[Cyborg does] not just go down," Tate said. "She went in like a corkscrew motion. She like spun her around. And that's what I mean -- it looks so effortless. The power [Nunes] delivers with the relative effort that she looks like she expresses through her body, it just doesn't seem to make sense. It doesn't look like she's throwing out-of-this-world power. But I can tell you firsthand, she really is."

Since beating Tate, Nunes has finished Ronda Rousey, Holly Holm and Cyborg, among others. She defeated Valentina Shevchenko, the current flyweight champion, twice. Nunes is the only woman in UFC history to win titles in two different weight classes. Nunes has the most wins in UFC history for women (12), the most wins in UFC title fights among women (7) and has defeated every woman who has ever won either the bantamweight or featherweight title in the UFC.

Tate is not shocked by any of it.

"It was the first time that I would say I experienced that, where I was trying to fight through being extremely rocked," Tate said. "And she just kept the pressure and she kept hitting me. I was trying to recover. I felt like one of those Marvel video game characters with the life bar. When you're playing the game and the life bar is trying to build, but you keep getting hit and it keeps getting smaller. That's how I felt."

What is it like to fight Nunes? ESPN asked Tate and three of Nunes' other UFC opponents to describe the unique struggle of competing against the best women's fighter of all time.

Editor's note: Answers have been edited for brevity and clarity.

She's tall [5-8]. She is one of the bigger fighters, especially at 135 pounds. She's confident. Any fighter that confident I always fear more than anyone else. She's diverse. Everybody knows her for her power, but she's also got scrambles on the ground. So, she's very well-rounded. It's like, man, I could be in a situation here or here or here. It's not like you're only watching out for one thing. I think that's what makes her kind of a scary fighter to face. She's confident for a reason -- because she's winning.

I felt like honestly in the fight my mindset was like, "Holly, why are you being hesitant? Just go." There's an opening there. Instead of going, I was hesitant, and then I got kicked. That's what I remember about the fight. I think it was me taking too long to feel it out, rather than just go. Any time you throw anything, there's also a chance of a counter, too, so you want it to be clean. I let myself think too much instead of acting and letting it go. I don't remember the kick that led to the finish, but I remember as soon as I hit my butt I saw the ref and was like to myself, "No, stand up, keep going." I wasn't knocked out, but I was definitely flashed. I remember the whole fight before, and I remember as soon as I hit my butt I remember trying to get up and feeling my legs a little off. And thinking I need to move around.

But the fight was already over.

I just remember being really surprised at how powerful her punches were. She knocked out Julia Budd earlier in her career and it looked so effortless. It almost looked like a weird punch that landed at a weird time. That's the thing that has really amazed me since I fought her and watching her since: She doesn't look like she's trying so hard with her striking. She looks relatively effortless. It's just the way she connects, the placing, the timing. Everything.

She's made to do it -- she's really made to do it. She's got a falcon-like wingspan and her physique just really allows for a lot of power to be delivered when she intends to. And you can't really tell when that is. She doesn't make it look like that punch is that much harder than the rest of them.

I'm telling you, it's even in her jab. Her jabs are nasty. I think those were the first punches that started to rock me a little bit. I can't remember anybody really rocking me with a jab.

I think what really stood out to me was her ability to deliver power in her shots. Once we hit the ground, I was really out of it. I remember my body was not coordinating with what I wanted it to. It was so strange. I couldn't get my body to respond the way I wanted it to. I was so off-balance. I actually fell on my own, because I was already dazed. I remember my heel caught the bottom of the cage and I fell. I was like, "Dammit." I was concerned about her getting on top of me, because I didn't have the strength. I'd say my strength was down to 30%, maybe even less. Really strange how the neurons in your brain work.

She was deceptively long. That was the other thing, too. I thought I was out of range. But I wasn't. She really got me with a good jab and then there were right hands that followed. It seemed like I just couldn't get out of her range.

I just remember her hits. I've always trained with guys. I remember always thinking with the small guys and the small girls, anybody at 145 pounds or under, it always seemed like such a rare thing to see a fight go to a knockout. It was always crazy endurance and always so much movement and you can see great jiu-jitsu, great wrestling, great speed, all of that. But I had not ever experienced getting hit hard enough to feel or see anything threatening to my consciousness. And I do remember a couple of Nunes' hits. Like damn, that one had some heat on it. I was thinking I was hit a lot harder than I've been hit by a girl before. I didn't know how many she had of those in her. I was like, how many does she have and how many of those can I take? 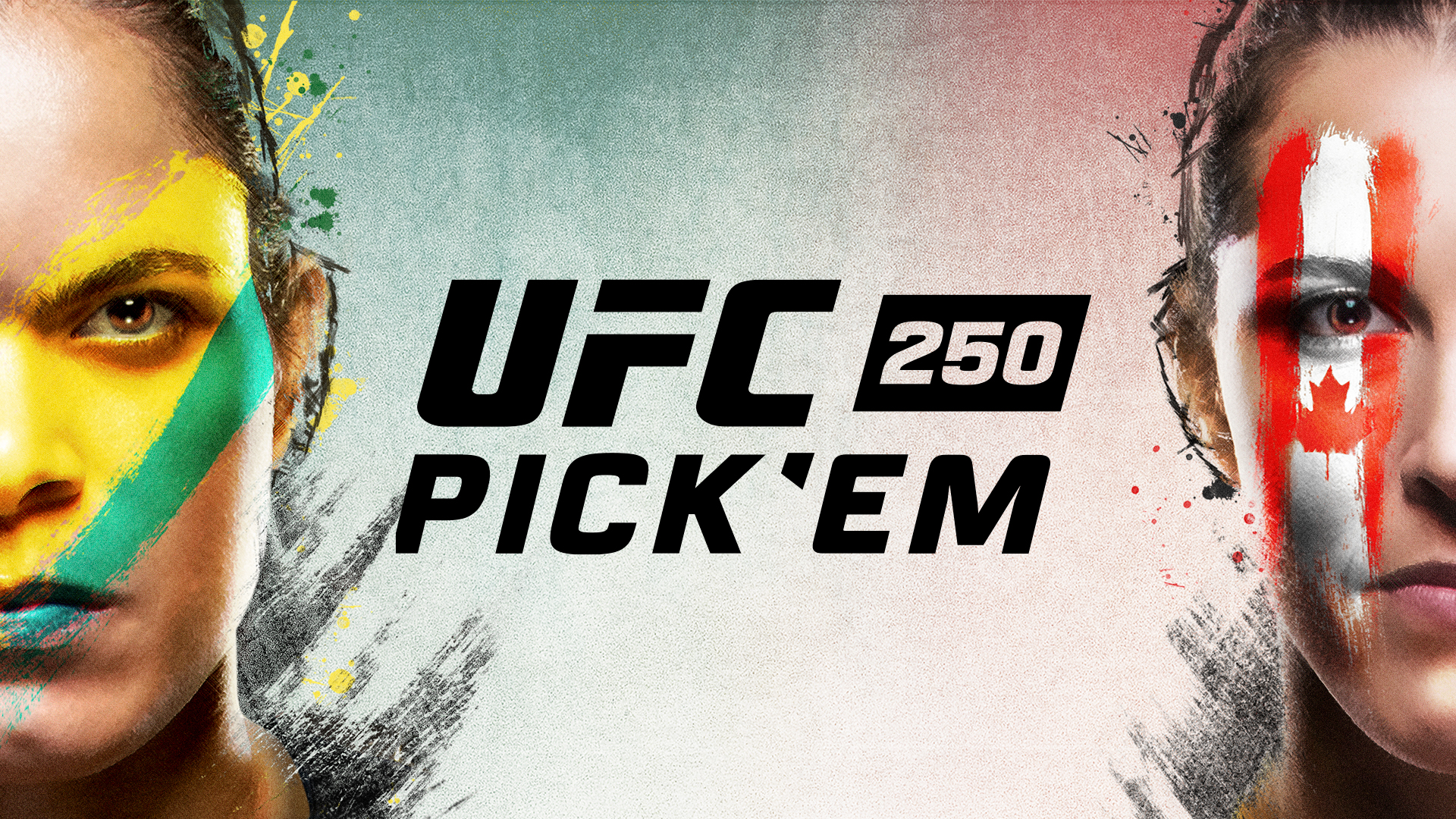 Make your picks for a chance at $1,000! Watch the action LIVE on ESPN, ESPN+ and pay-per-view. Make Your Picks

I know I hit hard, too. Like huh, there's another one of me out there. We're the same size and there's knockout power -- that's cool. Obviously not cool when you're wondering whether it's gonna f---ing get you or not. I was a little shocked. Like dang, that was a heavy hit. There was a few in a row and I remember getting hit and seeing like the stars and birds from the cartoons.

At the gates, she's got that awesome first wind. She's confident and an animal coming off fresh. But if you weather that storm and you just bite down on your mouthguard, she gets tired and you can turn it around on her. I definitely had to tough it out for a very large portion of that first round, but there was definitely a moment where it was like she gave me everything she had and then it was my turn, and it was never her turn ever again.

She's tough and she's strong. As far as her coaching from American Top Team and her plan there, she's got a great strategist. She's got a good system going. But at the end of the day, I broke her. I felt her want to go home and I know she knows I felt that. I know I felt that. It's crazy to see her come as far as she has after our fight.

One thing for sure is she has a great camp at American Top Team. She has great coaches surrounding her, there's no doubt about that. I think she's very smart for doing that and being able to adjust and stick to the plan. She did a great job at UFC 245. If she wasn't good at adapting to the game plan and doing what she had to do, she wouldn't be champion anymore.

I was impressed at how good she was at keeping top position. A lot of people said after the fight, "Germaine needs to work on her ground game." A lot of people forget she's a black belt on the ground. She's not the double champ for just being a great knockout artist. She's the champ because she's a great MMA fighter. I was impressed by the fact she had good top position. She was heavy on top. Every time I tried to put my feet on her hips, she adjusted. She stayed heavy.