Joanne Calderwood rolled the dice in Las Vegas on Saturday night and lost her bankroll.

Calderwood accepted a fight against Jennifer Maia when her promised challenge of Valentina Shevchenko was put on hold because the UFC women's flyweight champion is still recovering from a leg injury. Calderwood had to decide between waiting or staying active. She chose to fight, and she saw her title shot evaporate when she was submitted in the first round of the co-main event of UFC Fight Night at the promotion's Apex facility. 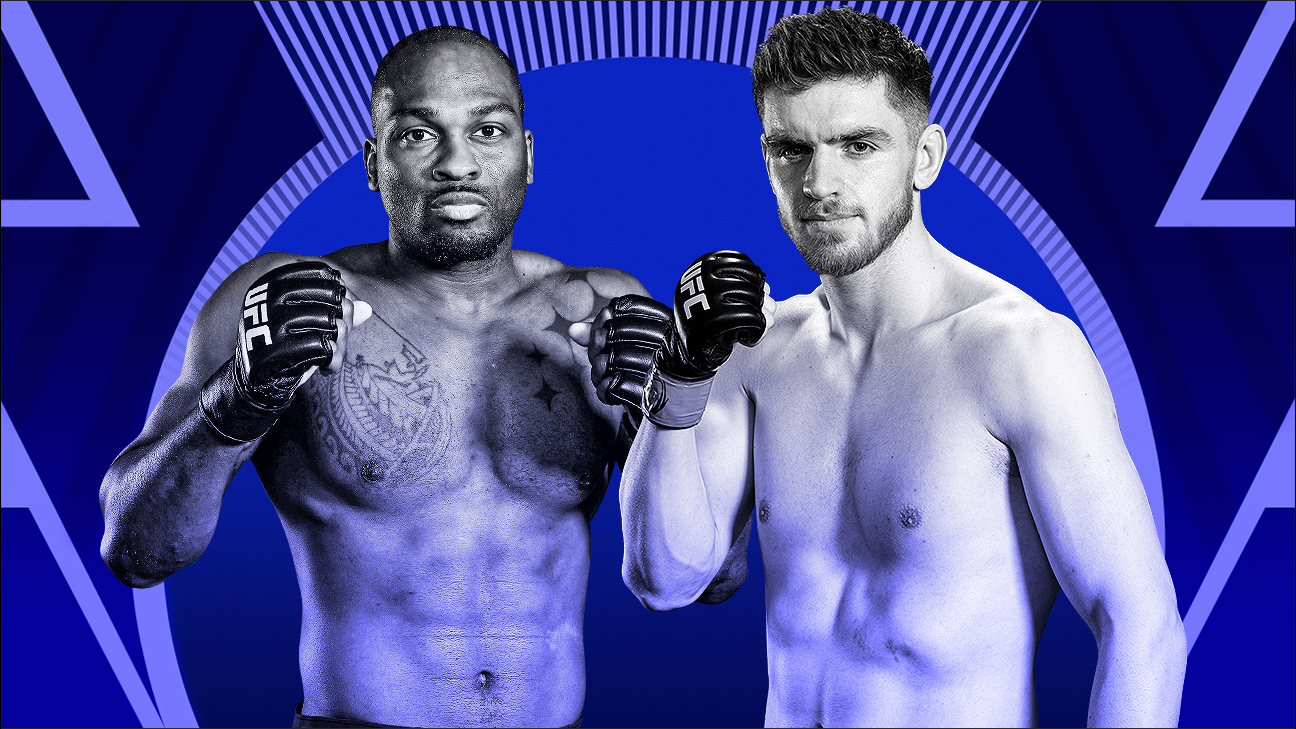 All fights from UFC Fight Night: Brunson vs. Shahbazyan will be available to watch on ESPN+.

Maia (18-6-1, 3-2 in the UFC), who is No. 9 in ESPN's divisional rankings, was in command from the start, peppering Calderwood (14-5, 6-5 UFC) with right hands and then one-two combinations until the fourth-ranked Scotswoman shot for a takedown midway through the round. Put on her back, Maia calmly tied up Calderwood to prevent any ground-and-pound, then worked for a submission. She locked in an armbar and got the tapout at 4:29 of Round 1.

Maia, 31, is a former Invicta FC champion from Brazil. She had a two-fight winning streak snapped in November by onetime title challenger Katlyn Chookagian. Now she is back on track. Her eight most recent fights had gone to decisions, but on Saturday, she got her ninth career finish.

"I always train a lot of jiu-jitsu and Muay Thai, but I showed I can do both," Maia said. "I'm going to be ready wherever the fight goes. I had two options in my guard -- go for the sweep or submission. My coach started yelling at me to not let go of the arm. I was able to finish the armbar.

"I want to fight with the champion. It's going to be a pleasure to fight her."

Calderwood, who trains in Las Vegas, is typically a busy striker. She came in with a rate of 6.67 significant strikes landed per minute in the UFC, the highest output in women's flyweight history. But on this night, she never got on track. She did land 26 significant strikes to Maia's 20, but many were front kicks to the body aimed to keep the fight at distance. It did not work, as Maia kept coming.

Calderwood hadn't fought since Sept. 7, 2019, and she didn't want to go over a year without fighting -- or a paycheck. And she wasn't guaranteed the title shot.

Note: There were two alarming moments during the card with fainting incidents. Trevin Giles had his fight canceled when he fainted before his fight against Kevin Holland, and Calderwood fainted after her fight. Both were taken to the hospital for examination.

The only way to the top of the UFC's middleweight division is through Derek Brunson. On Saturday, he slammed that door shut for a red-hot prospect.

Brunson stopped Edmen Shahbazyan via TKO at :26 of the third round in the main event of UFC Fight Night in Las Vegas. The previously undefeated Shahbazyan had all the hype coming in -- he's the former training partner of UFC legend Ronda Rousey. But Brunson nearly finished him at the end of the second, and then did so early in the third.

Luque took a bow following a vicious finish. He deserved it.

Luque had Brown in a front headlock. Brown tried to reach down to touch the ground, which would have made a knee to his head illegal. Luque held Brown's head up, so Brown was unable to touch his hand to the mat. Luque then landed a knee that dropped Brown and finished with a flurry of punches on the ground. It was a brilliant sequence.

Man!! Tough one for my bro @TouchNgo_ , keep your head up killa. Just keep working and evolving. Congrats to @VicenteLuqueMMA on another finish to his belt! Both guys are world class fighters/strikers and there could only be one winner. #UFCVegas6 #ufcfightnight

Afterward, Luque called out Nate Diaz in his postfight interview.

"He only wants superfights, but if we're gonna fall in the rankings, I'm above him," Luque said. "I have a lot of respect for him. With our styles, it would be a banger of a fight."

Luque dominated the first round. He slammed kicks to Brown's left calf, which opened him a right hand that dropped Brown. Luque landed another hard left later in the round that sent Brown reeling. In the second, Luque dropped Brown with a calf kick early, but Brown gained some momentum toward the middle of the round. Brown landed a spinning back elbow and a takedown.

With the round coming to a close, Luque grabbed onto a clinch, then the front headlock. Luque said he could have gone for a D'arce choke, one of his favorite techniques. But instead, the knee was there.

Luque, 28, has won two straight and eight of his past nine. The 28-year-old Brazil native has lost only to top welterweights Stephen Thompson and Leon Edwards since 2015. Brown, a 30-year-old New York resident, had a two-fight winning streak snapped.

Green's elbow drops Vannata in Round 3

Bobby Green's right elbow finds Lando Vannata's chin and sends him to the mat in Round 3.

Finally, there was a winner between these two.

Nearly three years after they fought to a draw in a classic battle, Green and Vannata put on another stellar performance of back-and-forth fighting. Green ended up getting the better of this rematch by getting stronger as the fight wore on.

Familiarity is known to breed contempt, but in this case, it brought a nonstop exchange of punches, kicks and trash talk. And when each round ended, there was a fist bump out of respect.

Once again, @BobbyKGreen came from the heart ❤️

After #UFCVegas5, Green spoke about the sacrifices it took to get where he is now and the legacy he's leaving behind for his children. pic.twitter.com/m6CmqpWTqi

After each man gave as much as he took early on, Green scored a knockdown in the latter part of Round 1, and while Vannata got back up and fought on, he never seemed able to keep up with Green from that point on.

All three judges scored the bout for Green, a 33-year-old out of Fontana, California, who has won two in a row. Two scorecards read 30-27, and the other had the fight 30-26.

When he was announced as the winner, Green yelled, "I just paid off my house!"

Vannata, 28 and fighting out of in Albuquerque, New Mexico, has just two wins in his past eight bouts.

One fight during that stretch was the draw with Green at UFC 216 in October 2017. Each man pocketed an extra $50,000 that night, winning fight of the night bonuses for a card that also featured the likes of Tony Ferguson, Demetrious Johnson and Fabricio Werdum. That first fight turned on a point deduction for an illegal knee from Vannata. This time, it was a clean victory for Green.

Martinez did a lot of damage with kicks to the head and body over the first two rounds, but it was a knee to the chin that finished the job in the third.

The 26-year-old out of Plainview, Texas, softened up Saenz over the fight's first 10 minutes, nearly getting the finish in Round 2 after twice flooring his opponent with head kicks. But Saenz, who turns 40 in 11 days, kept getting up and, while wobbly, survived the onslaught. When he came out for the final round, though, he was a bit unsteady off the stool yet turned aggressor, looking to close the distance and get the bout to the canvas. As things turned out, he was the only one to hit the mat, as a knee to the chin from a retreating Martinez wrapped up the TKO at 57 seconds of the round.

Great head kicks! Frankie has his hands up but with little gloves sometimes it still gets through!

Martinez, who came in 4½ pounds over the bantamweight limit on Friday and surrendered 30% of his purse to Saenz, won for the third time in his past four fights.

Saenz, who fights out of Scottsdale, Arizona, has lost two in a row after having won his previous two.

Munoz slams Maness to the mat in Round 2

Johnny Munoz picks up Nathan Maness and slams him to the mat late in Round 2 of their bout at UFC Fight Night.

It didn't go as expected for Maness in his UFC debut. Original opponent Ray Borg withdrew about 36 hours prior to the bout. And Munoz, the replacement, landed some unfortunate blows in the bout.

After a dominant round for Munoz in the first, when he used his wrestling and grappling to upend Maness, the tide turned beginning in the second. Maness was able to open up a cut on Munoz's hairline with an elbow and land the harder blows.

In the third, Munoz had a point taken away due to a second kick that fell below the belt. Maness persevered after, once again being the better striker in the round and even taking Munoz down late. Munoz, from the bottom, worked a rare calf crusher as the seconds ticked off the clock in the final round, but Maness was safe in the unique position and made it to the bell.

Maness, 29, has now won two straight, and this was his first UFC win. The Kentucky resident has only one career loss, to UFC veteran Taylor Lapilus in 2019 under the TKO banner. Munoz, a 27-year-old California native, came in on a day's notice as an undefeated prospect. He is a former King of the Cage bantamweight champion.

Jamall Emmers gets out to hot start vs. Vince Cachero

Jamall Emmers throws a flurry of strong punches early in his bout vs. Vince Cachero at UFC Fight Night in Las Vegas.

Emmers showed off a multifaceted skill set -- just not all at once -- in putting on a commanding performance to earn his first UFC victory.

Emmers, a 31-year-old fighting out of Redlands, California, worked a different attack in each round. In the first, he punished Cachero to the body, landing an unrelenting array of knees and kicks. Emmers went mainly with right hands to the head in Round 2, landing some big ones. In neither round did Cachero stop moving forward, however.

Emmers, who lost his UFC debut to Giga Chikadze in March, went to takedowns in the final round, getting two on four tries and setting up submission attempts both times. But Cachero, a 30-year-old Hawaii native fighting out of Los Angeles, defended well to make it to the final horn in his UFC debut.

All three judges scored the fight 30-27 for Emmers, who has won five of six.

Cachero was a late replacement for Timur Valiev, who withdrew from the fight earlier in the week because of visa issues.

It doesn't happen often, but unanimous draws do exist in MMA. And this was a fairly scored one.

Durden dominated the first round with his wrestling, ground and pound and submission attempts. It was a 10-8 round, with Durden having Gutierrez's back for much of the five minutes. In the second and third, though, Gutierrez took over with his striking. Gutierrez landed hard kicks to the body and calf of Durden, doing damage to both areas. Gutierrez dropped Durden twice in the third with kicks.

Durden, 29, was making his UFC debut on just a week's notice. The wrestler from American Top Team in Georgia had a seven-fight winning streak snapped. Gutierrez, a 29-year-old Boston native, is unbeaten in four straight UFC fights and had won three in a row coming in. Gutierrez was a minus-310 favorite.