Charles Oliveira did the unexpected Saturday as the Brazilian submission artist knocked out Michael Chandler in the second round of the UFC 262 main event. After an action-packed first round that featured both top lightweights holding their own, Oliveira opened up the second with a massive flurry of punches and became the UFC lightweight champion.

Before Oliveira's win, Beneil Dariush shut down Tony Ferguson in the co-main event. Now that he has defeated the biggest name on his resume, will Dariush be part of the lightweight title conversation, or is there simply too much of a logjam at the top? As for Ferguson, where does he go from here? The former lightweight title contender has now lost his past three fights, and his path to another title shot seems incredibly challenging. Is there a right booking that makes sense?

Oliveira, Chandler go back and forth in electric first round

Charles Oliveira and Michael Chandler have each other in trouble at different points of the first round at UFC 262.

Who's next for Charles Oliveira: Winner of Dustin Poirier vs. Conor McGregor on July 10

It was always going to look like this. Once Poirier picked the McGregor trilogy over a UFC title fight, the winners of these two fights were on a collision course. You've got Oliveira now, with a very legitimate claim as the best lightweight in the world. And you've got Poirier and McGregor, two other top lightweights, who also happen to be the biggest names at 155.

Especially with the way Oliveira won on Saturday, my goodness. There will be heat behind either one of these matchups. Substantial heat.

If Poirier and McGregor goes down in a way that neither of them wants to make a quick turnaround -- and to be fair, they both stand to make a substantial amount of money in July, and perhaps won't mind a short break -- Gaethje will be right there. And a fight between Gaethje and Oliveira would be fireworks.

Who's next for Michael Chandler: Justin Gaethje

This is a fight the UFC has looked at previously. It's a fight Chandler has expressed interest in. Gaethje has always been in a good spot, he just needed certain dominoes to fall before we knew his next move. One of the dominoes fell on Saturday. Another will fall on July 10.

Regardless of what happens on July 10, though, this will be an attractive option for Gaethje, Chandler and the UFC. It's a big fight for all because even though Chandler lost on Saturday, I don't think his stock will fall too much. He obviously had a great first round, and his brand grew from this event.

More people know about Chandler than at the start of 2021, and like I just said, I don't think Chandler's stock falls after this loss. If the loser of the trilogy on July 10 wants to turn around and get the bad taste of defeat out of his mouth, I imagine Chandler will welcome the opportunity with open arms.

Who's next for Tony Ferguson: Islam Makhachev

I'm guessing I might take some flack for this suggestion. And I get it. Ferguson has been badly out-grappled in his past two fights, and I want to pair him with the best grappler in the division?

Well, part of this suggestion is that, quite simply, there's not a super obvious fight for Ferguson. He went from winning 12 in a row and potentially becoming a UFC champion, to losing three in a row (badly). It's hard to matchmake someone who has gone through such a huge fall. The reason I think Makhachev is a good idea is because it would finally close the loop on the Ferguson-Khabib Nurmagomedov saga.

It is extremely unfortunate that Ferguson never fought for an undisputed lightweight title, and that he never got to fight Nurmagomedov because five times their scheduled bouts fell through for a variety of reasons. But to give Ferguson a chance to shock the world, and get to see him interact with Nurmagomedov's longtime teammate in Makhachev, it's a fight and a fight buildup I'd want to see.

If Diaz loses to Leon Edwards at UFC 263 next month in Phoenix, why not this fight? I had hoped to see this fight when we came into 2021. And actually, if Diaz upsets Edwards, I'd still argue this is a fight that makes so much sense. Two of the sport's biggest fan favorites. They each have extremely dedicated fanbases. Ferguson vs. Diaz has been a great idea for a while, and I suspect it kind of always will.

Who's next for Beneil Dariush: Rafael dos Anjos

Dariush wants a title eliminator, and one could certainly argue he deserves that opportunity. But the way in which he beat Ferguson on Saturday won't have fans clamoring to see him fight the very, very top of the division. He's getting closer to the top, but he'll have to continue taking the scenic route. Dos Anjos is a former champ, and highly ranked. I suspect dos Anjos might get a different fight before Dariush would be looking to go, but as things sit right now, this makes the most sense to me.

For the same reasons I just suggested dos Anjos. Dariush is not on a fast track to the top after this win, but he's in the conversation. Hooker is in that conversation, too. They're on the fringe of it. If they were to fight, the winner would likely earn a date against a top-four guy.

Murphy: Ferguson in a freefall in deep division

Yankees great Yogi Berra famously said, "It gets late early out there." Come to think of it, Tony Ferguson and Yogi would've made great friends.

We're hardly a year removed from the fifth Nurmagomedov-Ferguson cancellation -- a championship booking at the original UFC 249. In the interim, "El Cucuy" has seen a 12-fight win streak spiral into a three-fight skid -- which at lightweight means absolute free fall. Ferguson lost to bona fide contenders in every appearance, but it's a steep tumble down the ladder in the sport's deepest division. A lightweight in his late 20s could hardly afford a trio of lopsided losses. Ferguson turned 37 in February. The path back is too long and too tumultuous for a man at his stage of career with that amount of tread worn off the tires.

It's a crime he never competed for an undisputed title, despite those 12 straight wins at 155 pounds. After years of his name remaining synonymous with contention, Ferguson now moves multiple impressive wins from being mentioned for a possible title fight. He was an underdog to ninth-ranked Beneil Dariush at UFC 262 and got swept.

Ferguson remains a fan favorite, but his competitive peak is behind him. He'll still provide objective entertainment and demand eyeballs like few else. Any chapters written from here will serve as epilogue to a memorable, altogether unique career. It's a harsh reality that has come quicker than any of us expected.

Raimondi: Barboza has one more run left in him at featherweight

Edson Barboza shows his dominance in the Octagon with an impressive performance vs. Shane Burgos at UFC 262.

When a good fighter changes divisions late in his or her career after a rough stretch, it sometimes feels like desperation. That was how many felt when Barboza, a longtime dangerous lightweight, dropped down to featherweight. When Barboza went from 155 pounds to 145 last year, the big question was whether the sturdy Brazilian could even make the weight. He was never a small man at lightweight, and always looked shredded. 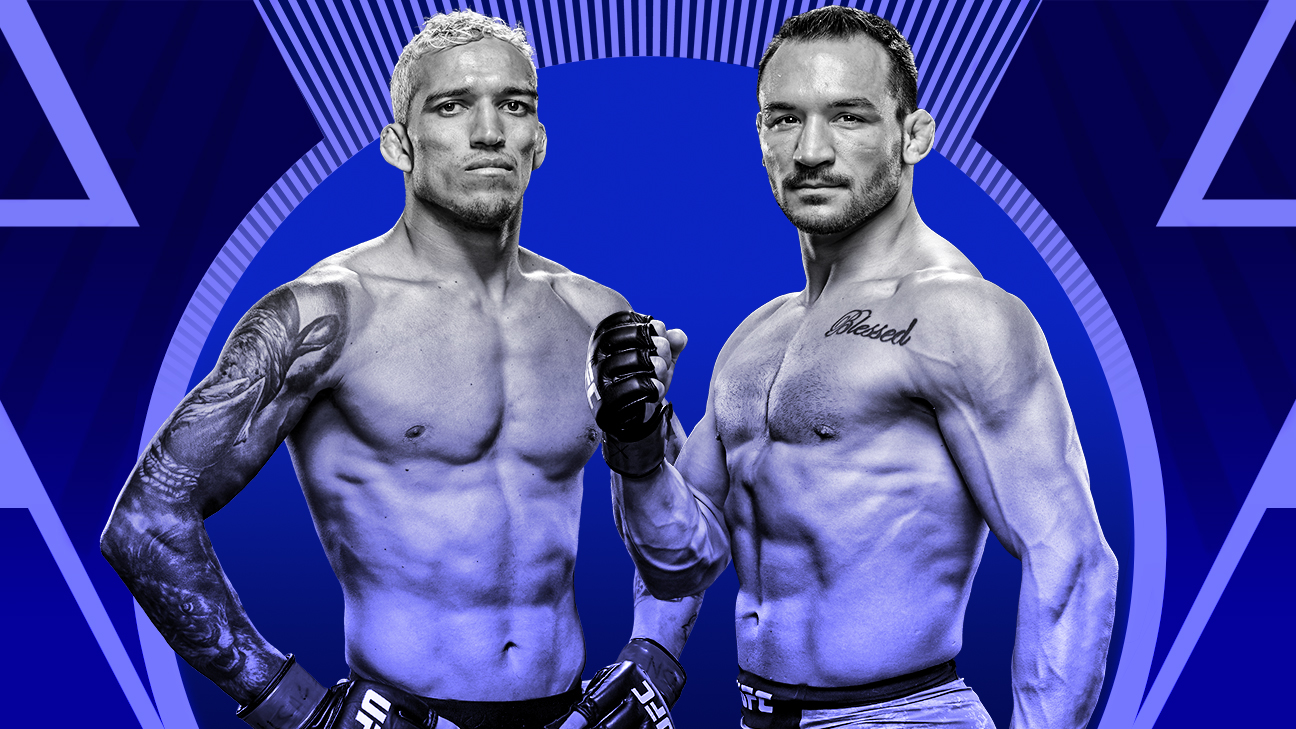 If the PPV is purchased, all fights from UFC 262: Oliveira vs. Chandler will be available to watch on ESPN+.

Well, Barboza can absolutely make featherweight. And now it appears he's ready to make a legitimate run there at 35 years old. Barboza stopped the always-game Shane Burgos with an absolutely wicked right hand Saturday night. Burgos attempted to fight through the shot, but after a delay of a few seconds his body and brain just shut down and he crumpled backward into the cage, and then down to the canvas. Barboza looked phenomenal in the fight, like a fighter who was a decade younger. Barboza looked fast, explosive and powerful with leg kicks, spinning techniques and nice combinations with his hands. In short, Barboza looked like a contender at featherweight.

Barboza is on a two-fight winning streak, and his loss last year to Dan Ige in his featherweight debut was a close one -- and many who watched the fight thought Barboza won. Back at lightweight, Barboza had lost four of five. But look at the men he lost to: Khabib Nurmagomedov, Justin Gaethje, Kevin Lee and Paul Felder. The latter was also a very close decision that Barboza could easily have won.

Barboza is better than his recent record might suggest. And Barboza remains capable of finishing elite fighters, as he is still an incredible striker.

The top of that featherweight division is brutal. Alexander Volkanovski will defend his title next against Brian Ortega. Former champ Max Holloway, waiting in the wings, is still one of the pound-for-pound best fighters on the planet. But who wouldn't want Barboza in that mix, against the likes of a Yair Rodriguez, Zabit Magomedsharipov, "The Korean Zombie" Chan Sung Jung or Calvin Kattar? Barboza has now put himself in that conversation for a real run close to the top of the division. Why can't he do it?

Wagenheim: Give Dariush the respect, and more opportunities

Beneil Dariush shows off his incredible grappling skills in a closely contested matchup with Tony Ferguson at UFC 262.

For many, the story of the co-main event was that Ferguson lost his third in a row. But the fight said even more about the other guy in the cage. Even when Ferguson tried to turn around a bout not going his way by clamping on a D'Arce choke, Dariush calmly worked his way free and went back to putting on as dominant a performance as did the past two fighters who defeated Ferguson, Gaethje and Oliveira. That puts Dariush in heady company.

Lightweight is wide open in the post-Khabib era. Oliveira won the championship on Saturday night, and he'll likely make his first defense against the winner of the July 10 meeting of Dustin Poirier and Conor McGregor. After that? Gaethje probably is next in line. Chandler vowed that he'll be back. But now Dariush is in position to make noise in the division.

It's about time. The Ferguson fight was Dariush's 26th as a pro. The past 20 of them have come in the UFC. He had one rough stretch in 2017 and early '18, going 0-2-1. Since then, he has won seven in a row. But he's formidable beyond the numbers. Like Oliveira, he's dangerous both on his feet and on the canvas. And like the new champ, Dariush is poised and exudes confidence no matter where the fight goes.

Dariush is far from the biggest name among the 155-pound elite. But he has a skill set and an approach to the game that will make him a problem for anyone who steps in with him.