If Rob Font was underrated heading into Saturday's UFC Fight Night main event against Cody Garbrandt, he took a big step toward establishing his presence in the bantamweight division with a unanimous decision win.

The co-main event in Las Vegas was considered by some to be a No. 1 contender fight. Carla Esparza was ranked No. 4 among strawweights by the UFC heading into action, while Yan Xiaonan was No. 3. Esparza might have needed more than just a garden-variety win to land a title shot, and she delivered a second-round TKO. Was it enough to secure a title shot against Rose Namajunas? 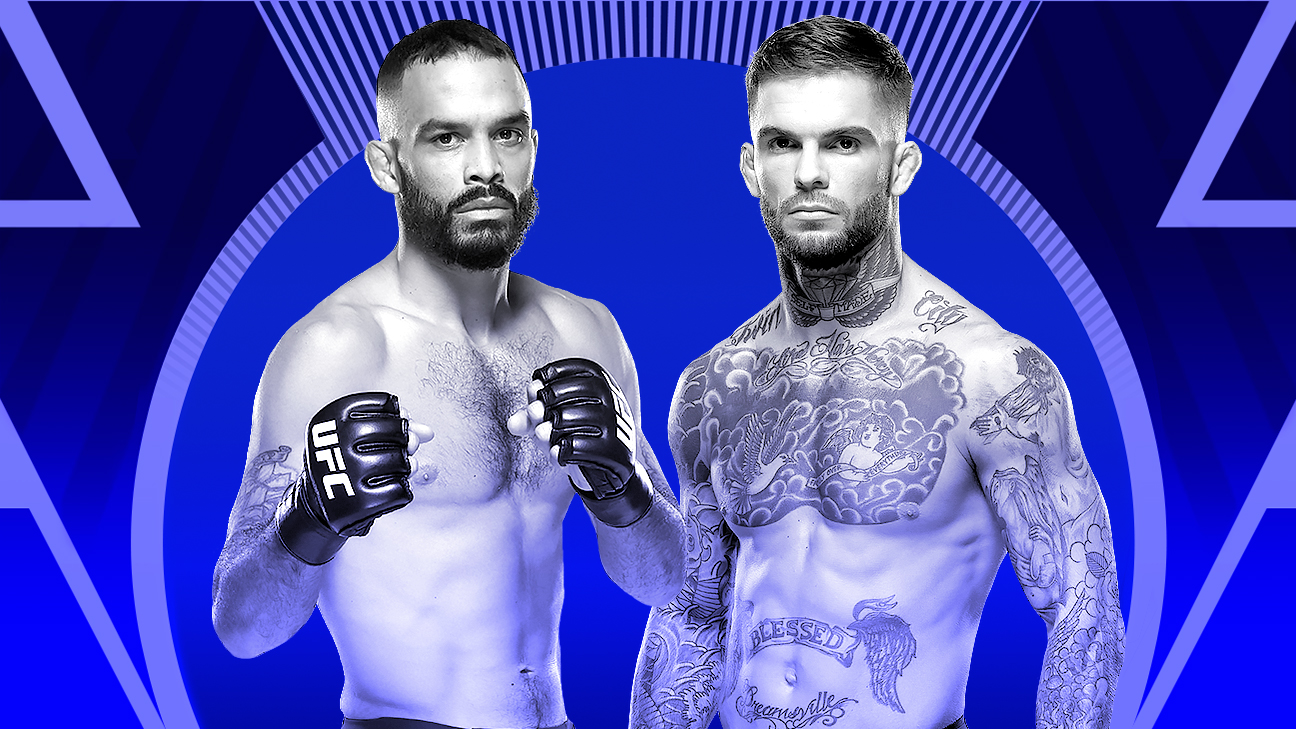 All fights from UFC Fight Night: Font vs. Garbrandt will be available to watch on ESPN+.

Meanwhile, Edmen Shahbazyan is learning how steep the learning curve is in the UFC. After suffering his first loss to Derek Brunson last August, Shahbazyan, who was considered a top prospect not long ago, was thrown in with former title contender Jack Hermansson on Saturday. The veteran used his experience decisively.

Outside of the Octagon, Paul Felder made news from the commentators' table when he announced he was retiring as a fighter. Felder said he didn't want to wait too long on his decision because he didn't want to slow down the lightweight division.

What a performance by Rob Font. Masterful. I have long believed Font was underrated in the bantamweight division, but did I envision him taking five of five rounds from a former champion in Cody Garbrandt? Honestly, I did not.

Font is technical and well coached -- and that showed on Saturday. He's big for the division, durable. Cardio was not an issue at all in his first five-round fight. This guy is a real problem.

Garbrandt didn't go away easily in this one. Garbrandt looked to kick early, then he looked to wrestle. He took Font's best shots, and he tried to draw him into dangerous exchanges late when he knew he was down on the scorecards. Font handled all of it beautifully.

This division is a bit held up at the moment due to the fact Aljamain Sterling won the title by disqualification on March 6 when he was struck by an illegal knee by Petr Yan. Sterling had a procedure done on his neck in April and said he should be ready to defend his title against Yan by October or early November. It's unfortunate, because there are a lot of good contenders at 135 pounds who seem ready for a title shot now. I believe Font will most likely fight the winner of a July 24 bout between Cory Sandhagen and TJ Dillashaw.

And as for Garbrandt, I'm not ready to give up completely on him reclaiming a title. He hasn't been very active in the past two years because of health issues, some related to COVID-19, and you do wonder if those issues were still affecting him on Saturday. My guess is Garbrandt will take some time and then drop to flyweight for his next bout. And frankly, I think he'd need to win only one fight there to get a title shot. Kai Kara-France would be an intriguing option, or Alexandre Pantoja.

There can be no denying Carla Esparza anymore.

She is the No. 1 contender at 115 pounds. She has to be next for Rose Namajunas. Had Esparza won a boring decision over Yan Xiaonan, I would have said the same.

I am sure, though, that there would have been some pushback because she isn't the flashiest fighter and she isn't the biggest trash talker. But Esparza squashed all of that talk on Saturday night by mauling Xiaonan, who was undefeated in the UFC. She beat her up and stopped her via second-round TKO while in the crucifix position.

It was the kind of win a fighter needed to prove a point, to cement her place as the top dog in her weight class. The kind of win that punches your ticket to a title shot.

And that's not all Esparza has going for her: Remember, she holds a win over Namajunas. She beat Namajunas via rear-naked choke in 2014 to win the inaugural UFC strawweight title fight.

I mean, what's better than this? Namajunas gets a chance to prove how much she has improved since then and Esparza gets a chance to win back the belt that she helped put on the map many moons ago.

That's now five wins in a row for Esparza, but it's her lone finish during that streak. What's better is it's her first finish in the UFC since her win over Namajunas almost seven years ago. She has won seven times since then, and it felt like she just wanted it more Saturday night.

She proved a point. She cemented her place. Bring on the rematch.

Raimondi: Shahbazyan takes another step back, but talent remains

Sink or swim. That's basically what the UFC tells even the best prospects in the world. Last year, ESPN had Edmen Shahbazyan ranked as the second-best MMA fighter in the world under 25 years old. No matter. After Shahbazyan was thoroughly dominated by Derek Brunson last August in the toughest test of his career to that point, the UFC did not opt for a tuneup fight. Just the opposite. Shahbazyan was thrown in with Jack Hermansson, a top-notch grappler who figured to give Shahbazyan the same types of difficulties on the ground that Brunson did.

Tough night for Edmen lots of talent head high and keep the work.

In boxing or even in other MMA promotions, a potential star is not likely to be tested like that. But there are no gimmes in the UFC, especially considering how Shahbazyan dispatched previous opponents via knockout such as durable veteran Brad Tavares. But what happened Saturday night was fairly predictable. Shahbazyan looked tremendous on the feet in the first round, but when Hermansson got him to the ground in the second, it was a slow burn. In the third, Hermansson nearly finished him on the ground, bloodying Shahbazyan near both eyes with elbows and punches.

It's probably time for Shahbazyan to take a step back and face an unranked opponent. ESPN had Hermansson at No. 9 in the world at middleweight. Shahbazyan is just 23 years old and has plenty of time to fight his way back. He likely will -- he's too skilled not to.

But this type of matchmaking is what many people laud the UFC for, because the result of very few fights are essentially decided when they are made, which is what happens in boxing.

Wagenheim: Felder will be missed in the cage, but analyst role remains

I'm going to miss Paul Felder. Yeah, I know, we're not really going to miss him, because he's still going to be in close proximity to the Octagon, just outside it at the broadcast table. And he's really good in that role.

Felder's smart fight analysis and his easygoing persona do not exactly make him a rarity among the athletes in this sport. Some of those who are the most violent inside the cage are thoughtful and cordial and interesting outside it. Felder always provided us with a reminder that being well rounded was not simply about martial arts skills.

It was quite a night on the broadcast for retired fighters. Earlier in the evening, Alan Jouban sat at the analyst desk, emotionally talking about his recent announcement that he was hanging up the gloves. Jouban has worked as a model, Felder as an actor. Talk about well rounded. Both are solid analysts, but as fighters, Felder reached higher ground.

Felder never made it to the top five at lightweight. But he came so close. Had last year's split decision loss to Dan Hooker gone the other way, Felder's rise might have continued. Actually, four of his final five fights came down to split decisions (he was 1-3). But what I'll most remember are his finishes, especially his spinning backfist KO of Danny Castillo in his second UFC fight in 2015. Then there was a 2017 TKO of a fellow named Charles Oliveira, who has not lost in nine fights since then and now wears the UFC title belt. Not a bad way for Felder to leave his mark on the division.