ABU DHABI -- UFC 267 was stacked with some of the biggest names in the sport. The headlining title fights resulted in successes for the 42-year-old Glover Teixeira and Petr Yan who wrapped gold around their waists, but the standout moments happened earlier on the main card with Khamzat Chimaev and Islam Makhachev proving once again that they are legit contenders in their respective divisions.

Teixeira defeated Jan Blachowicz in the main event, handing Blachowicz his first loss since 2019. This was Teixeira's second attempt at the light heavyweight title, seven years after losing to Jon Jones. This victory puts Teixeira in an interesting spot moving forward with plenty of rising talent at light heavyweight.

Yan started slow against Cory Sandhagen, but solved his opponent with a steady dose of strong boxing in rounds 2-5 in order to win a unanimous decision victory and claim the interim gold. The path at bantamweight seems to be clear with Aljaimain Sterling waiting to return.

But what should the UFC do with Chimaev and Makhachev? Is it time for a big step up? Let's take a look at the options:

Who should be next: Jiri Prochazka 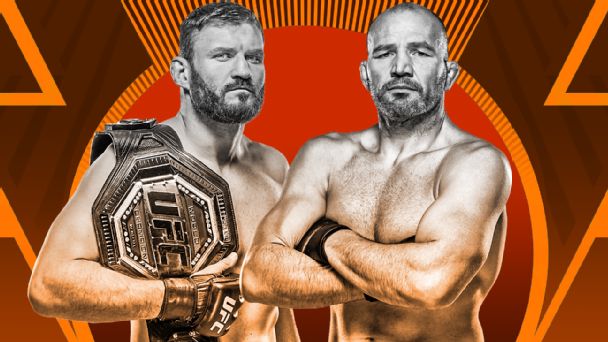 All fights from UFC 267: Blachowicz vs. Teixeira will be available to watch on ESPN+.

What a story. Teixeira is a UFC champion for the first time at age 42. And his first defense will have to come against a serious challenger in Prochazka. You can make an argument for an immediate rematch for Blachowicz, but personally, I don't see it. As good as Blachowicz has been, he wasn't on a run that demands an immediate run back with Teixeira.

Prochazka came into the UFC in 2020 with hype, and his two performances in the Octagon have only fueled that hype even more.

If something were to prevent Prochazka from taking this fight, Rakic would be next in line. The 29-year-old Austrian is a legitimate title threat in this division and figures to be for the foreseeable future, but Prochazka is firmly ahead of him for the next title shot at the moment.

Petr Yan displays his power on his way to defeating Cory Sandhagen by unanimous decison to win the UFC interim bantamweight title.

Who should be next: Aljamain Sterling

This is the only answer -- and Sterling told me recently he expects to be healthy enough to unify the belts as soon as December. That's not happening, as there is no place in the schedule to put it, but first quarter of 2022, let's do it.

This fight needs to happen for the division to move on. It's been in a weird place for a while, frankly. Between Henry Cejudo retiring, Sterling winning by disqualification, the creation of an interim title, TJ Dillashaw returning from suspension -- this weight class needs clarity and it starts with revisiting Sterling vs. Yan.

I'll include this wild card just to include a wild card, but there really is no other direction to go but Sterling vs. Yan. The history for one, but also now the fact we need to unify the belts.

Islam Makhachev makes quick work of Dan Hooker in Round 1

Islam Makhachev continues his dominant UFC lightweight division run with a quick submission of Dan Hooker in Round 1.

Who should be next: Beneil Dariush

I hate to do this to my man, Dariush. It's not even that Makhachev represents such a tough fight. Obviously, he does. But Dariush has been such a competitor, he's been willing to take the fights others don't want. Late last year, he was supposed to fight Charles Oliveira. The fight didn't happen, because Oliveira withdrew. Now, Oliveira is the champ and Dariush is still looking for his next big fight.

It's not really fair to Dariush -- he would have to take this fight -- and it's the obvious one to make in the division. It's a very interesting style matchup. Everyone knows about Makhachev's grappling. Dariush might have the best skillset to negate that, among the top options of the division.

Wild card: Loser of Oliveira vs. Dustin Poirier on Dec. 11

Makhachev actually mentioned this to me before the fight as a possible option. The UFC doesn't need to be in a rush to book his next fight. It can afford to find out what happens in some of these upcoming matchups. Makhachev vs. either of the men competing for the lightweight title at the end of the year would make sense.

Chimaev has words for Dana White while carrying Jingliang

During the first round, Khamzat Chimaev picks up Li Jingliang off the mat, carries him toward the fence and chats it up with Dana White.

Who should be next: Kamaru Usman, if Usman retains title against Colby Covington at UFC 268

Doubt me on this one... I don't care. Chimaev hasn't fought a level of competition even close to Usman, but that's part of the intrigue. This sport allows itself wiggle room when it comes to matchmaking championships. And as much as Leon Edwards or Stephen Thompson is more deserving of a title shot than Chimaev, sometimes in this sport, you make the hot fight. And this is it.

Chimaev is special. He is still a mystery in some ways. He's the most exciting option for Usman, as long as Usman wins the Covington rematch in New York. And you know what, if Usman is smart (and Usman is very smart), it would not surprise me at all if he sees the dollar signs here and calls out Chimaev himself.

Could you imagine? He's standing in Madison Square Garden as the No. 1 pound-for-pound fighter in the world -- and calls out Chimaev, after what Chimaev just did? Usman likes money. This fight is money. Right now.

Luque has a claim as the original boogeyman of this division. He's a scary opponent right now, and he's far more proven than Chimaev. If Chimaev doesn't fight for a title in his next bout -- which to be fair is quite aggressive -- he still is looking at a big fight. This would qualify.