NEW YORK -- A pound-for-pound No. 1 fighter steps into the cage with the second-best fighter in his weight class and makes him look second rate. That was the narrative early on in the UFC 268 main event, as welterweight champion Kamaru Usman bloodied Colby Covington in the first round and knocked him down twice in the second.

But then Covington did what an aspiring champion does. He dug deep and climbed back into the fight, and by the final round on Saturday, he had Madison Square Garden rocking with a "Colby! Colby!" chant.

When the final horn sounded, we had an upset. No, Usman did not lose his belt. He was the winner on all three judges' scorecards. Despite the longstanding animosity that accrued over the build-up to two UFC welterweight championship fights, Covington and Usman hugged in the middle of the Octagon and offered each other respect. Who would have ever expected to see that?

But it happened. And it should happen again. The fight, and the show of respect. 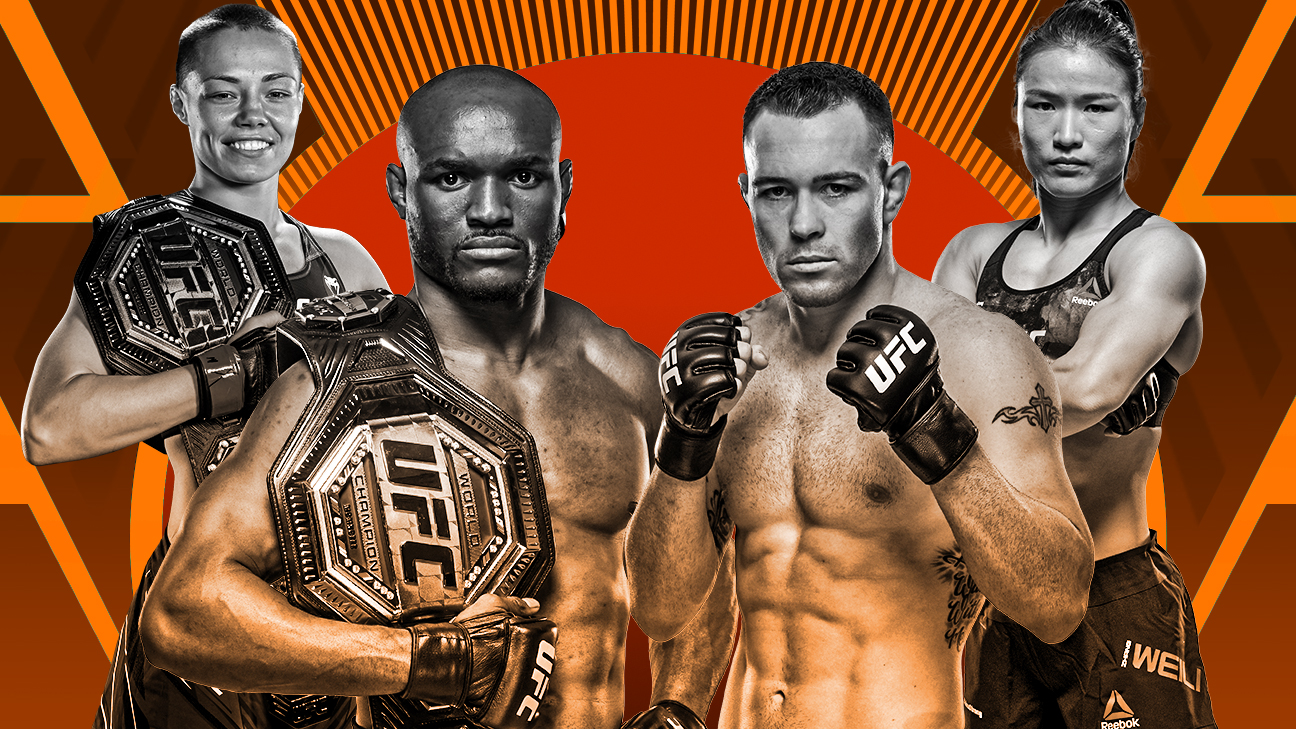 If the pay-per-view is purchased, all fights from UFC 268: Usman vs. Covington 2 will be available to watch on ESPN+.

This was no mere 170-pound championship bout. This matchup had history behind it.

When these two met in 2019, it was a classic back-and-forth punctuated by Usman scoring a fifth-round knockout after Covington was heard between rounds telling his cornermen that his jaw was broken.

Yet in the aftermath, Covington continued to spin a whole different narrative with his own personal set of facts. The fight should not have been stopped. He didn't have a broken jaw. The sky is not blue.

If that was where Covington had stopped with his revisionist history, it really would have been nothing out of the ordinary. Losing fighters have been known to use delusion to pump themselves back up for a potential next time. But Covington did not stop there, of course. His mouth roared on with xenophobia, racism and misogyny on his way up the UFC's welterweight ranks, and continued though the buildup of both fights. Covington even dragged Usman's family through the mud.

So Usman tried to shut him up. By the end of Round 2 the champ appeared to be on his way to doing just that. But then the challenger had his say. His manner of pushing buttons is painfully awkward and offensive, but Covington certainly can fight.

Living up to the expectations of the first fight and the outsized hopes for the rematch was always going to be tough. And then the stage for the main event was set by another title fight rematch, in which Rose Namajunas retained her strawweight belt by once again defeating the woman she took it from earlier in the year, Zhang Weili. And that, after the main card had opened with Justin Gaethje and Michael Chandler turning the Garden into a deafening den of violence with a fight for the ages.

Both of those bouts were tough acts to follow, but Usman ended the night by closing in on history. This was his fifth fight in a row in which he has successfully put his welterweight title on the line, tying him with Matt Hughes for the second most consecutive defenses among 170-pounders in the UFC.

That's hallowed territory right there, being mentioned alongside Hughes. The image of Hughes in the early aughts carrying Frank Trigg or some other unlucky passenger across the Octagon and slamming him to the canvas with gusto still brings goosebumps to fans who go back to when the sport was young.

Hughes made seven title defenses overall in two reigns as champ. Yet both he and Usman trail far behind Georges St-Pierre, whose run at the top of the weight class saw 11 challengers take a swing and a miss in their title shots. No welterweight champion's time in the Octagon has been illuminated by such a golden glow.

So, that would make GSP the next target for Usman, right?

Not so, if Usman is to be believed. He apparently prefers to train his focus on a different fighter, one you surely would not expect -- if you've even heard of the guy. When the subject of career legacy came up during Usman's meeting with reporters during fight week, he had little to say about St-Pierre or another record-book legend, Anderson Silva, who owns the UFC standard of 16 consecutive UFC victories -- a mark that Usman now is within one win of tying.

Instead, Usman reflected back on a meeting with a fighter named Jose Caceres, whom he faced in a Championship Fighting Alliance bout in 2013. It was Usman's second pro fight, and it didn't go well. He was choked out in the very first round.

He might not be chasing, but he sure is catching up.

And yet to hear Usman speak publicly of late, he says he would prefer that his next outing have no direct bearing on his MMA legacy. He has his sights set on a man who also fought on Saturday night -- not at Madison Square Garden, but at MGM Grand Garden Arena in Las Vegas. That would be Canelo Alvarez, who knocked out Caleb Plant to become boxing's undisputed super middleweight champion of the world.

Yep, another MMA fighter looking to box. But why, oh, why?

That's actually not a strong selling point. At least when Conor McGregor cashed in with a boxing match with Floyd Mayweather in 2017, he was drawing back to the ring a retired boxer who was not known for his knockout power. Alvarez, on the other hand, is in his prime and has 39 KOs on his record, including four in his last five fights. Usman wants to challenge himself, but Canelo?

Those words came from a man whose company would earn a ton of money from an Usman-Canelo bout. He still doesn't want it.

But his welterweight champ sure does, for the challenge of it and also for the paycheck. And sure, as money grabs go, a detour against Canelo would be preferable to seeing Usman besmirch his welterweight belt by persuading the UFC to offer an undeserved title shot to a big draw such as Conor McGregor or Nate Diaz.

Better yet, if Usman doesn't want to chase St-Pierre, then why not copy him? It might appear that the champ has cleared out the welterweight division, but who would complain if Covington were to earn his way back to a third shot at the title? And there are others waiting their turn as well. As GSP once discovered, the challenges keep on coming. If Usman stays the course -- in MMA, not boxing -- he could very well leave a legacy for others to chase in the future.