LAS VEGAS -- Yair Rodriguez, blood coming from several cuts on his face, pointed his finger and planted it in Max Holloway's chest. Holloway, face swollen and bleeding from above his right eye, took his fist and patted it against Rodriguez's face.

Holloway's legend continued Saturday with a unanimous decision victory over Rodriguez in the main event of UFC Fight Night in Las Vegas (Watch this fight on ESPN+). And Rodriguez's own lore has leveled up after a warrior-like performance in a losing effort.

The back-and-forth bout, which ended up as one of the best of 2021, could have been a torch-passing moment from Holloway, the former UFC featherweight champion, to the up-and-coming Rodriguez. 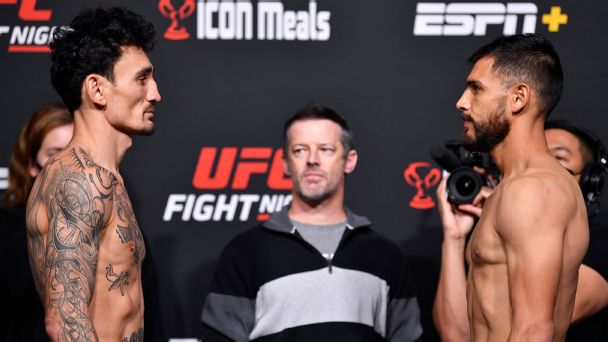 All fights from UFC Fight Night: Holloway vs. Rodriguez will be available to watch on ESPN+.

Instead, Holloway (23-6), nicknamed "Blessed," earned another huge win in a historic career and Rodriguez raised his stock despite defeat. Rodriguez (14-3, 1 NC) pushed Holloway to the very brink, rallying with an elbow that cut Holloway open in the fifth round. But Holloway held on.

"If you want to be the best, you've got to beat the best - and the best is 'Blessed,' baby," Holloway said in his postfight interview.

Both men bore the damage of the fight and headed to the hospital after leaving the UFC Apex. It was a brutal night overall, with eight knockouts tying an all-time UFC record and nine stoppages tying the most of any UFC event held in 2021.

It took de Lima all of 32 seconds to finish off Rothwell, courtesy of a sharp right hand and powerful left hook. De Lima hurt Rothwell early with a right hand down the middle. After Rothwell backed up to the fence, De Lima dropped him with a left hook.

Rothwell was clearly hurt, but instinctually held on to de Lima and looked for a takedown. Referee Herb Dean stepped in immediately after the left hook, but then appeared to briefly change his mind and allowed the fight to continue for a few more moments. De Lima essentially stopped fighting after Dean's initial move, however, and Dean ultimately called it off.

Rothwell protested the stoppage, but to no avail. De Lima picked up his second win in a row, which snapped an 11-fight streak in which he had alternated wins and losses. The Brazilian is officially on his first winning streak since 2014. Rothwell, 40, from Wisconsin, has dropped two of his last three.

Letson had not fought in nearly three years, and her return was scheduled for the smaller cage at UFC Apex. Then Spencer gave Letson no time and no space.

Spencer raced across the Octagon at the start and remained in Letson's face for the whole fight, clinching against the cage for much of it and landing a relentless stream of elbows and punches aga. By the end of Round 1, Spencer had a 17-6 striking advantage.

The domination continued until Spencer turned it up a notch in the second half of the final round, when she took the fight to the canvas, moved to full mount and proceeded to drop elbows until referee Mark Smith mercifully jumped in with 35 seconds left.

"Going back to where I was most successful," said Spencer, a 30-year-old Canadian who fights out of Orlando, Florida. She came in having lost three of her previous four, but in two of those bouts she went the distance with Amanda Nunes and Cris Cyborg.

Letson, who is 29 and from Milwaukee, saw a five-fight winning streak come to an end.

Khaos Williams knocks Miguel Baeza out cold in Round 3

Khaos Williams sends Miguel Baeza to the mat late in Round 3 for the big-time win at UFC Fight Night.

Baeza was having success with his calf kicks. On one particular kick, however, Williams had one heck of a counter.

Baeza caused Williams to stumble on a kick to Williams' calf in the third round. But Williams came back swinging, landing a left and then a monstrous right hand that snapped Baeza's head back and put him down hard. The knockout finish came at 1:02 of the third round.

"I was made for this," Williams said in his postfight interview. ... "They know I'm a threat now."

In the first round, Baeza came out pretty strong, landing those calf kicks plus combinations and a stinging right. After a slip, Baeza was able to win a scramble and get in position for several leglocks. Williams, though, was resilient and successful in punching his way out with hard ground and pound.

"It really wasn't that close, man," Williams said. "It probably looked worse than it really was. I was safe, I was good."

Williams landed some nice combinations in the second round and both men landed hard calf kicks. In the third, Williams exploded with that combination off the Baeza calf kick with spectacular results.

Williams, 27, has won two straight and four of five in the UFC. The Michigan native, nicknamed "The Ox Fighter," has three big knockouts in those four UFC victories. Baeza, a 29-year-old from Florida, has dropped two in a row following a three-fight UFC winning streak.

Song Yadong stuns Julio Arce with a head kick and then finishes him off with strong punches in the second round.

Yadong is looking more like a future title contender with every fight. Such was the case on Saturday, as the 23-year-old South Korean finished Arce via TKO at 1:35 of the second round.

The finish came after Yadong staggered Arce, who's from New York, with a right hand. Arce retreated to the fence where Yadong walked him down and unloaded a heavy flurry that dropped Arce to the canvas. It's the first time Arce has been finished in a fight since March 2016.

Yadong, who trains out of Team Alpha Male in Sacramento, California, looked great on the feet throughout the 135-pound contest. He threw with speed and power and mixed in a good variety of kicks to Arce's legs and head. He is already 7-1-1 in the UFC, with his only loss coming against Kyler Phillips in March.

Alvarez acquired his "El Fenomeno" nickname prior to Saturday, but his phenomenal performance against Moises lived up to the moniker.

Although the 28-year-old from Spain was a more than 2-to-1 betting underdog, Alvarez was in command from the start. His 6-foot-3 stature produced a significant reach advantage, and Alvarez showed an ability to hit while not getting hit. He landed 44 strikes to 11 for Moises, who was hurt most badly by body strikes before sagging against the cage, leading referee Mark Smith to jump in at 3:01 of Round 1.

It was the fourth straight win for Alvarez, all finishes; in fact, all 19 of his pro wins have been by finish. The last three, however, had been by submission.

"I always said I was a striker," Alvarez said through an interpreter. "I can do it."

Moises, a 26-year-old Brazilian who fights out of Coconut Creek, Florida, has lost two in a row. His only "win" on this day was that he got to take home 30% of his opponent's purse because Alvarez had missed weight by a pound and a half on Friday.

It's time to consider Lee a women's flyweight contender yet again.

In one of the best performances of her career, Lee pummeled Calvillo en route to a TKO victory at 5:00 of the second round. Calvillo declined to come out for the third. Lee lumped up Calvillo badly in the second round and Calvillo was emotional afterward.

"I really hope Cynthia is OK," Lee said in her postfight interview. "I'm grateful she took this fight on three weeks notice. ... For [referee Mark Smith] to come and say the fight was over, I was happy, I was thrilled. Also, concerned about Cynthia."

Lee worked a nice jab in the first round, bloodying Calvillo's nose. But Calvillo had moments, too, including several combinations that caused blood to pour from Lee's nose. In the second round, though, it was mostly one-way traffic. Lee hurt Calvillo with a front kick to the body, then landed big left hooks and right hands, mixing in more kicks to the body and legs. By the end of the round, Calvillo was bleeding from multiple cuts on her face.

Lee, 32, from Louisiana, has won two straight following a three-fight losing streak. She came into the UFC in 2018 with considerable hype as a former LFA women's flyweight champion and appears that Lee has finally started to put it all together. Calvillo, a 34-year-old California native fighting out of Las Vegas, has dropped three in a row.

Woodson, of St. Louis, put it on Anglin on the feet, en route to an easy first-round finish. The end came at the 4:30 mark, as Anglin succumbed to a string of body punches along the fence. It is Woodson's first finish inside the UFC.

Anglin tried to hang with Woodson on the feet and did attempt one takedown, but Woodson defended it easily. The jab was on point for Woodson, and once he had Anglin hurt, the finish came very quickly.

"I knew I had to put them hands together," Woodson said. "I knew I couldn't throw too many kicks, I felt he was looking to take me down. I hurt him with the body shot and saw him wince and knew I could finish the fight."

Woodson is now 3-1 since coming off the Contender Series in 2019. Anglin, of Michigan, has lost two in a row.

Jojua missed weight by 2½ pounds on Friday and had to surrender 30% of her purse. It was pretty much all downhill from there.

Casey repeatedly split the guard to land right hands and kicks to Jojua's face, which was bloody by the middle of the first round; Round 1 ended with a 30-6 striking edge for Casey.

Even when Jojua succeeded in getting the fight to the canvas, she was the one absorbing most of the damage. As she followed Casey to the mat in Round 2, Jojua took two upkicks to the face. Then Casey landed several elbows from bottom position.

Casey, who is 34 and fights out of Glendale, Arizona, ended a two-fight losing streak by earning 30-27 scorecards from all three judges -- despite injuring her hand in Round 1.

Jojua, a 26-year-old from the country of Georgia, has been training in Las Vegas, has lost two of her last three.

Rafael Alves lands a flying knee on Marc Diakiese and then Alves immediately submits Diakiese with a guillotine choke.

Alves is not the kind of guy you want to make a mistake against.

After wobbling Diakiese with a left hand, Alves ran in for a flying knee. Diakiese was able to catch Alves and go for a takedown - but Alves grabbed onto a guillotine. Alves locked in the choke as he and Diakiese hit the ground and Diakiese tapped out. The submission finish for Alves came at 1:48 of the first round.

Alves, 31, from Brazil, picked up his first UFC victory with that impressive sequence. He is a Dana White's Contender Series alum and the former Titan FC interim lightweight champion. Diakiese, a Congolese 28-year-old fighting out of the United Kingdom, has lost two straight and five of his last seven.

Da-Un Jung knocks Kennedy Nzechukwu out with a series of elbows in the first round.

Jung, of South Korea, knocked out Nzechukwu with standing elbows along the fence at the 3:04 mark of the opening round. The finish came after Jung hurt Nzechukwu on the feet, walked him to the fence and dropped him with elbows over the top.

It was a decisive finish for Jung and a bit of a puzzling performance by Nzechukwu, who barely attempted any strikes and mostly stood directly in front of Jung in a defensive posture. It is Nzechukwu's first loss in four fights. Jung improves to 4-0-1 in the UFC.