Ketlen Vieira defeated Miesha Tate via unanimous decision in a five-round main event of UFC Fight Night on Saturday in Las Vegas. It was Tate's second appearance since returning from a nearly five-year layoff, as she was retired from 2016 to 2021.

Two takeaways from this one: First off, Tate (19-8) wants to be here, which is refreshing. Too often in combat sports, athletes come out of retirement for reasons that only get them hurt. Whether it's financial necessity, lack of other options or just missing the glory that comes with this sport, their reasons for a return aren't always the best.

Tate legitimately looks like she wants to be here. Her preparation looks good. Her willingness to compete and take a shot are both there. We saw the old Tate in there, that same Tate that captured a UFC championship in 2016. So, if she wants to continue to fight, I imagine the sport will support her in that.

Second takeaway: Vieira might (12-2) have as good a shot of beating women's bantamweight champion Amanda Nunes as anyone. Now, in saying that, realize that I'm saying her shot is not very good. Nunes is in a class of her own. But even though Vieira's record isn't amazing (she's only 2-2 in her past four fights), her size and physical ability at least give her a shot.

If she can be more aggressive than she was on Saturday, and possibly more confident in her finishing ability, she has a puncher's chance. It would take perfect execution and probably a little luck, but considering how dominant Nunes is, that's a better shot than most currently have.

Watch this fight on ESPN+

Full results from the fight card

Undefeated welterweight Sean Brady took a big step in his career progression, as he out-pointed Michael Chiesa over the course of a hard-fought 15 minutes. 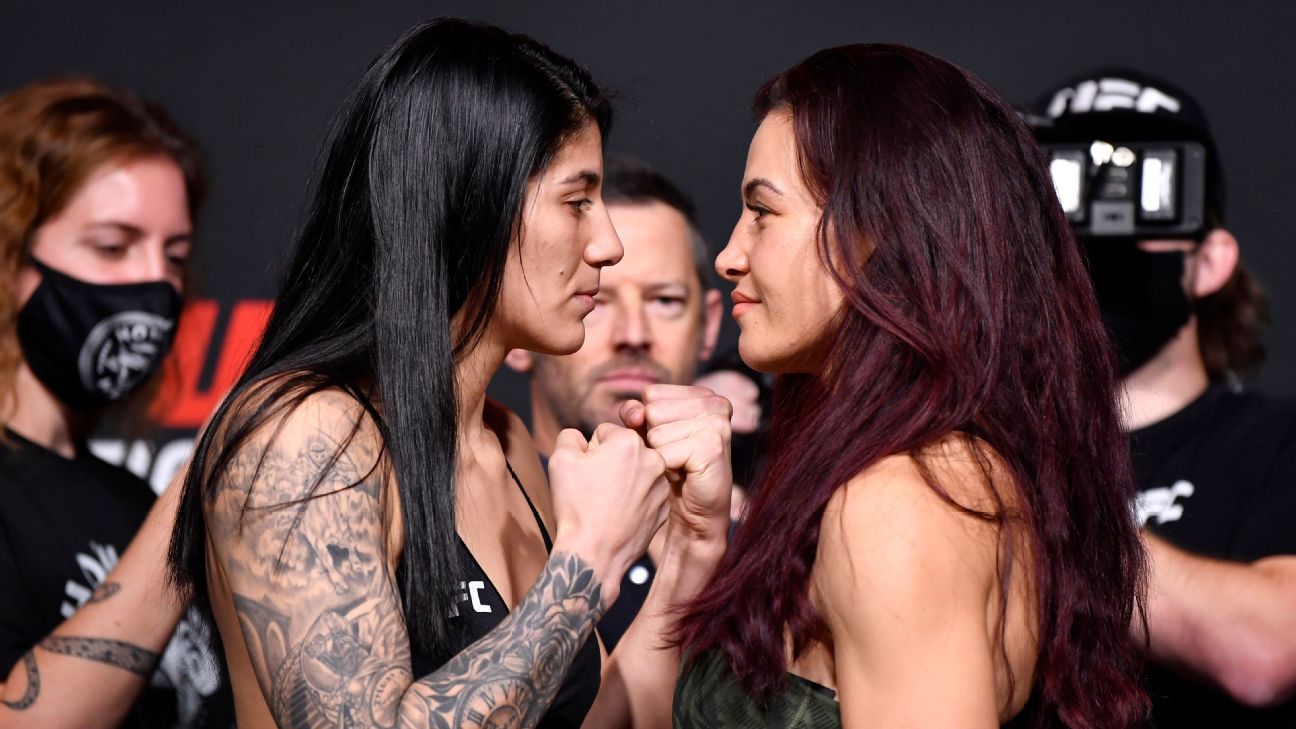 All fights from UFC Fight Night: Tate vs. Vieira will be available to watch on ESPN+.

Brady maintained his perfect record inside the Octagon in the co-main event. The Philadelphia native has been pegged as a potential dark horse at 170 pounds, and his profile will be on the rise following this signature win.

Chiesa mounted a major rally in the final round, but it wasn't enough to overcome an early deficit. All three judges scored the contest in Brady's favor by 29-28.

"I knew he was going to be super tough," Brady said. "If I couldn't get him out of there, I knew I had the gas tank. He might have thrown me in the final round, but I'm happy with the performance. I want one of these main events everybody keeps getting. I want to prove I can go five rounds with a top-five, top-10 guy."

Brady, 28, looked great in the first two rounds. He meticulously worked his way into the clinch and took Chiesa down with an efficiency that no one ever has in Chiesa's long UFC career. Brady took Chiesa's back in the second round, secured a body triangle and hunted a rear-naked choke, although he was never that close to a finish.

After spending most of the first two rounds trying to maintain a distance against Brady, Chiesa went for broke in the final frame -- and it paid off in a big way. He hurt Brady with straight left hands and uppercuts, and pummeled him with knees to the body.

It was too little, too late for the former lightweight, though, as Brady managed to survive the late flurries and slow things down when he needed to. Chiesa has now dropped his past two fights after starting 4-0 at welterweight.

Taila Santos gets Joanne Wood to tap out in the middle of their bout at UFC Fight Night for the big win.

Santos picked up her fourth win in a row, and did so in style with a first-round finish over Las Vegas' Wood. The hard-hitting Brazilian dropped Wood twice in the first round before forcing her to tap to a rear-naked choke at the 4:49 mark.

It was arguably Santos' most impressive UFC performance to date, and should move her comfortably into the top 10 of the division. She entered the contest ranked No. 10, while Wood went in as the UFC's No. 5-ranked flyweight.

Many expected Santos to look to take Wood down, but she was more than comfortable on the feet. Wood had some success with distance strikes, but Santos showed no respect for her power and eventually walked her down with a haymaker right hand to score a knockdown. After Wood managed to get to her feet, Santos dropped her again with a left hook-right hand combination. Wood showed heart and thwarted Santos' first attempts at a submission, but eventually gave in.

"I know she has Muay Thai, but my roots are Muay Thai," Santos said. "I lured her into a Muay Thai fight so I could then finish her on the ground."

Yahya's grappling pedigree is by no means a secret, as the 37-year-old is now in his 19th year as a professional fighter. Still, good luck stopping it.

Yahya, of Brazil, improved to 5-1-1 in his past seven with a unanimous decision over Kang. Yahya survived several scares in the first and third rounds, as Kang knocked him down in each frame with punches. The savvy veteran not only survived but turned the final knockdown into a takedown of his own, en route to three 29-28 scores.

South Korea's Kang, who came in on a three-fight win streak, was simply hopeless on the floor. Once Yahya got him to the ground, it was a wrap. Yahya spent almost the entire second round on Kang's back and never relinquished top control in the final round once he had it secured.

Yahya has never fought for a UFC championship and is not ranked at 135 pounds. His only loss in his past seven appearances, however, came via decision against Ricky Simon.

Yanez, 27, improved to a perfect 4-0 in the UFC, but the more experienced Grant definitely made him earn it. Yanez failed to record a knockout for the first time inside the Octagon, but did enough on the feet to collect 29-28 scores from two judges. The third judge saw the fight as 30-27 for Grant.

Fighting out of Houston, Yanez has slick boxing that has turned heads early in his UFC career. He leaned on those boxing skills yet again on Saturday, but Grant responded well with long kicks to the leg and body, as well as boxing combinations to Yanez's midsection.

Despite that offensive success, however, Grant absorbed the heavier shots of the two. Yanez badly bloodied his face by the second round, and rocked him multiple times with either the left hook or right cross. Grant attempted to get Yanez down in the second round, but abandoned the effort once Yanez defended the shot.

For Yanez, it's the first time he has gone the distance in a fight since 2019. Grant has now lost his past two.

Sabatini opened in style by getting two first-round takedowns and landing 45 strikes to Lutz's nine in that opening session, and it was an indication of things to come, as Sabatini won his fifth in a row.

For Lutz, the loss snapped a 12-fight winning streak that extended back to his pro debut in 2015.

Garcia got multiple takedowns in each round to secure his first UFC win in his third appearance inside the Octagon.

The 27-year-old from Mexico had seven takedowns over the three rounds and earned 30-27 scores from all three judges.

Levy, a 30-year-old Israeli who fights out of Las Vegas, suffered his first career loss in his UFC debut.

At the beginning of last month, Godinez was 5-1 fighter with just a single bout in the UFC. Now, after three fights in 43 days, the 28-year-old Mexican, who fights out of Vancouver, British Columbia, has a couple more wins and is competing like a veteran.

Godinez controlled this fight by taking it to the canvas on several occasions to neutralize the best weapon of Lookboonmee, a Muay Thai specialist. This control was enough for Godinez to earn the judges' nod in all three rounds (30-27, 30-27, 30-27).

Lookboonmee, a 25-year-old from Thailand, saw a two-fight winning streak come to an end.

It was a close fight in which each man had his moments, by Durden was the more accurate striker and had more success on takedowns, which was enough for him to get his first UFC victory (29-228, 29-28, 29-28).

The 30-year-old, who fights out of Atlanta, has lost only once in his past 10 bouts -- in his second UFC bout, last December, which came after a draw in his debut.

Qileng, a 28-year-old from China, lost his second in a row.

Nuerdanbieke is big on takedowns, and wrestling has been a problem for Soriano in past fights, so the path to victory for the Chinese fighter was clear. But, as it turned out, not so easy.

Soriano showed improved takedown defense early on, keeping the fight standing, where he had an edge. But Nuerdanbieke was relentless in his pursuit of takedowns, and in gaining dominant positions when the fight was on the canvas, and that propelled him to the win (29-28, 29-28, 29-28).

Nuerdanbieke, 27, has won three of four, while Soriano, who is 32 and fights out of Boca Raton, Florida, has lost two in a row.

Pinheiro won her eighth in a row by starting strongly and cruising the rest of the way.

The 28-year-old Brazilian had two big takedowns in the first round, and after being unsuccessful on takedown tries in Round 2, she floored Hughes with punches late in the round. After fending off her opponent in the third, Pinheiro was the winner on all three judges' scorecards (30-27, 30-27, 29-28).

Hughes, who is 29 and from Everett, Washington, has lost three in a row and four of her past five.