Now that Israel Adesanya has nudged Robert Whittaker out of his path, the UFC middleweight champion can set his sights on his ultimate destination: surpassing Anderson Silva.

Adesanya, the Nigeria-born New Zealander's tight but unanimous decision victory over Whittaker in the main event of UFC 271 on Saturday night in Houston was his fourth defense of the title. That breaks a tie with Chris Weidman for the second most times a 185-pounder has successfully put the UFC belt up for grabs.

And now that second place is Adesanya's alone, he had better make himself comfortable. It is going to remain his home for years -- so long as he's able to continue winning to hold onto his spot, and no one emerges to challenge his firm grasp on that distinction. 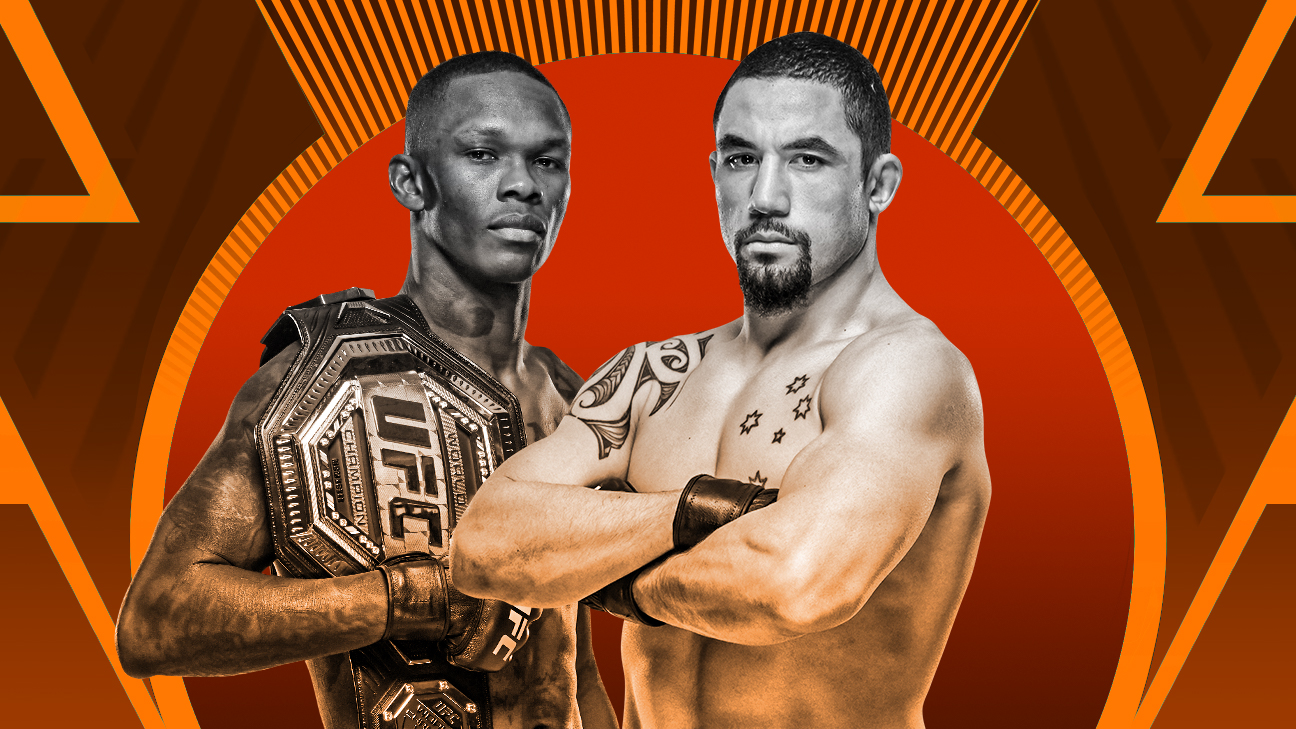 If the pay-per-view is purchased, all fights from UFC 271: Adesanya vs. Whittaker 2 will be available to watch on ESPN+.

The record for UFC middleweight title defenses is 10, held by you-know-who.

Silva put up many of the greatest numbers the weight class has seen. Upon joining the UFC in 2006, Silva created and enhanced his legend while rolling off 13 consecutive wins at middleweight. But some of Silva's accomplishments are already within reach, as Adesanya has now won his first 11 UFC fights at 185 pounds.

But Adesanya's pursuit of the crown of greatest ever is not simply a numbers game. That crown is bejeweled, which means it sparkles when the spotlight hits. And that is where Silva made himself stand out. His grand entrance to the Octagon, and becoming champ in just his second trip inside that cage. His victory-from-the-jaws-of-domination choke out of Chael Sonnen. His one-kick stoppage of wrecking machine Vitor Belfort. His feat of fleet-footedness in turning ex-light heavyweight champ Forrest Griffin into a frustrated windmill. For longtime fans of MMA, these moments remain Technicolor memories, even years later.

Adesanya has amassed style points as well, and he added to that portfolio on Saturday night. He didn't get the knockout, as he had on the night in 2019 when he took the belt from Whittaker, but Adesanya was flashy at moments and most often masterful in both his domain -- striking from distance -- and in his challenger's. Whittaker did manage to score four takedowns, but Adesanya was never controlled on the canvas for more than a few seconds, and stuffed six other shots in the process.

The champ never allowed the fight to stray from his comfort zone, because he kept himself comfortable everywhere the fight went. Unlike in his lone defeat, when he attempted to become a two-division champ but was manhandled on the canvas by then-light heavyweight titlist Jan Blachowicz last year, Adesanya would not allow Whittaker to threaten him or wear him out. His breathing was steady and relaxed for the full five rounds. This was a man in control.

"I'm the big dog in this yard," Adesanya said afterward.

Adesanya was more steadfast on Saturday than he was on the night of his first meeting with Whittaker. That time, he put on a flashier show -- even before the knockout that earned him the belt. On the biggest night of his life, performing in front of a UFC-record crowd of 57,127 in Melbourne, Australia, Adesanya was loose enough to stage his first act not in the cage but on his way there. Joining a trio of dancers in stylish, high-energy choreography, Adesanya made unquestionably the boldest walkout in the history of the UFC. In that moment, Adesanya revealed his creativity and personality in a way that not even Silva came close to.

Silva has generated way more highlights inside the cage to this point, of course, but Adesanya has produced some sparkling moments with his smooth footwork, precise striking and spinning creativity. And his gritty Round 5 against Kelvin Gastelum in 2019, while perhaps not quite as dramatic as the Silva-Sonnen comeback, showed that Adesanya, too, can dig deep.

Adesanya even got to share the stage with his idol, although by then Silva was a shadow of himself, as his bruised, bloated face showed after the 2019 three-rounder that the younger man won by unanimous decision.

Looking to the future, there are obstacles that could derail Adesanya's pursuit of Silva -- and the biggest could be Adesanya's ambition. He's already once attempted to add light heavyweight glory, and it brought him the only loss of his career. Should he try again and be a second-time success, he might find 205 pounds to be his new home. That could do wonders for his legacy as an athlete, but not so much as an all-time middleweight great. He also had aspirations of fighting another GOAT, Jon Jones, but given that Jones has bulked up ahead of a presumed move up to heavyweight, that fight now seems unlikely.

If Adesanya instead chooses to remain at 185 for the long haul, he's going to need dance partners to continue to enhance his résumé there. Defeating Whittaker for the second time means he has all but erased the second-best middleweight. Next up is likely Jared Cannonier, who defeated Derek Brunson on the UFC 271 undercard. He's the only fighter in the top five who Adesanya hasn't beat; in addition to two wins over Whittaker, Adesanya has wins over Marvin Vettori (twice), Brunson and Paulo Costa.

Adesanya acknowledged after Saturday's main event that Cannonier was the obvious next step.

"I'm the big dog in the yard," repeated the champ, "and I know the other dog, Jared Cannonier, did some work tonight."

If Adesanya gets past that challenge, there will have to be several more stout opponents if Adesanya is going to challenge Silva's spot atop the all-time mountaintop -- and at the moment, there are depth issues at middleweight beyond Adesanya's control. Are there any other 185-pounders capable of rising to the occasion? Both Adesanya and welterweight champion Kamaru Usman have shut down talks of fighting one another, but what if Colby Covington grows tired of waiting for a third shot at Usman? And then there's Khamzat Chimaev, a wild card on a meteoric rise who has bounced between welterweight and middleweight.

Regardless of which fighters step into his path moving forward, for Israel Adesanya to match the greatness of Anderson Silva is a long shot that is going to require a long haul. But on Saturday night the champ showed again that he has the ingredients necessary to fuel his ride down that road.