Editor's note: What can we take away from a thrilling slate of title fights and marquee matchups at UFC 281? Jeff Wagenheim, Marc Raimondi and Brett Okamoto offer their thoughts from a highlight-packed event in New York.

NEW YORK -- Why are we surprised?

Alex Pereira had shown us it could be done long before he stepped into the Octagon on Saturday night to challenge Israel Adesanya for the middleweight championship in the main event of UFC 281. When he and Adesanya were both kickboxers, Pereira had fought "The Last Stylebender" twice and defeated him both times, handing Adesanya the only knockout loss of his combat sports career. (At least to that point.)

So we all knew the challenger could defeat Adesanya, because he had done so two times.

And then he did it for the third time.

And yet it still was shocking for MMA fans, who are not used to seeing Adesanya outmanned, at least not by a fellow 185-pounder. When Pereira hurt the defending champ with a right hand midway through Round 5, then swarmed Adesanya along the cage to seize the moment, the full house at Madison Square Garden momentarily was left silent by the finish, perhaps in disbelief, before erupting with deafening acclaim for a new champ. 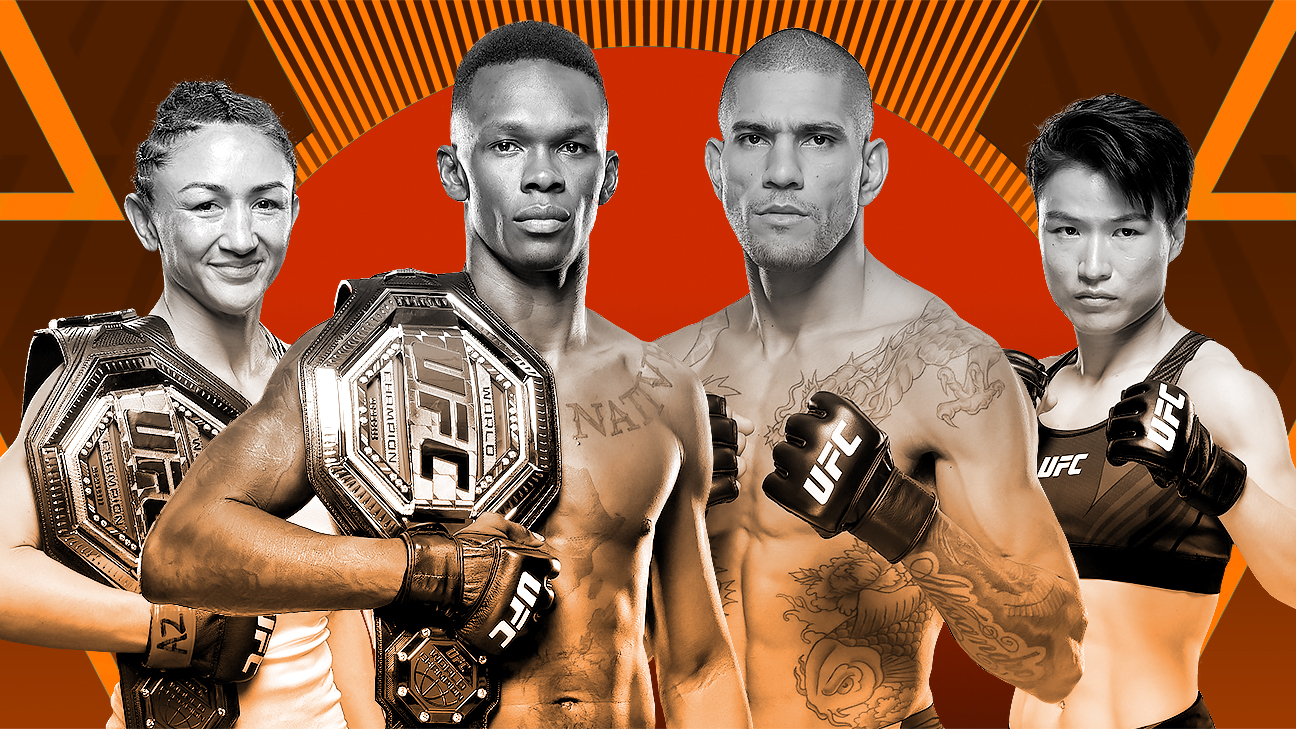 If the PPV is purchased, all fights from UFC 281: Adesanya vs. Pereira will be available to watch on ESPN+.

Pereira (7-1), who resumed a long-dormant MMA career just two years ago after being a two-division Glory kickboxing champ, showed off power throughout the fight. Even when he missed, he represented danger. When he connected, he made an impact. But early on, Adesanya (23-2) was trading in the pocket, emboldened by badly hurting Pereira right at (after?) the horn to end Round 1.

As the fight wore on, though, and Adesanya absorbed some heavy leather, he began using his footwork more and more to maintain the safest distance he could. He even mixed in wrestling to seize the advantage in Round 3, which didn't put Pereira in deep danger but did tire out the challenger. It also exposed an area in which the new champ is a work in progress: A grappler better than Adesanya, of which there are several, would put Pereira in just as much danger as his power punches put his opponents.

None of this is to discount the former champ. Like Kamaru Usman a few months ago, Adesanya carried much of the action during the fight and carried a lead into the final round. As much power as there was coming his way, he appeared to be cruising to a decision win. When the fighters met in the center of the Octagon for the final round, Adesanya was ahead on all three judges' scorecards, three rounds to one. But that's why they schedule these championship fights for five rounds.

And when there's still time on the clock, and a fighter with electrifying power is in the cage, the lights can go out at any moment. Which they did. Again. -- Wagenheim

The door is back open for The Diamond

Round 1 of Poirier-Chandler was a roller coaster

Dustin Poirier and Michael Chandler trade blows in an incredible first round of their fight.

Don't look now, but Dustin Poirier is right back in the UFC lightweight title picture.

After winning an absolute war against Michael Chandler, Poirier has once again put himself into the contender conversation. Here's the important part: The men Poirier lost to in title fights are no longer the champion. Khabib Nurmagomedov has retired. Charles Oliveira lost the belt, first on the scale and then in the Octagon against new champion Islam Makhachev. And Poirier still has as good of a résumé as anyone at the top of the 155-pound weight class, including knockout wins over Justin Gaethje and Conor McGregor.

Makhachev will make his first title defense against Alexander Volkanovski, the featherweight champion, at UFC 284 in February. Could Poirier get the winner of that fight? It's certainly possible. Poirier has only two losses since 2016, and they were both in title fights against the aforementioned former champs. At this point, "The Diamond" has built close to a Hall of Fame legacy, though you know he'd love to win the big one just once and hold that gold belt. He's been interim champion, but never undisputed.

With the victory over Chandler, Poirier kept himself in the conversation. And really, he's right there. The UFC knows what it's going to get with him, too. Poirier is always professional and rarely has a bad fight. He always leaves it out there, like on Saturday, when Chandler nearly finished him on multiple occasions. But Poirier came back and won, via finish in the third round. That's what he does and why it wouldn't surprise anyone to see him in a title fight again next year. -- Raimondi

Thanks for 15 unforgettable years, Frankie Edgar

Let it be known that Frankie Edgar's MMA career did not end with a knee to the face by Chris Gutierrez. That strike finished the fight barely two minutes into the first round, but these two weren't done with each other. As soon as Edgar was able to get up, Gutierrez went right to him and locked him in an embrace that seemed to last an eternity. That is the deep well of respect that "The Answer" has earned over his 15-year run.

Edgar's cornermen soon joined the hug, and so did the Madison Square Garden crowd, in a sense. A "Frankie Edgar! Frankie Edgar!" chant broke out, and a sad ending turned into a tribute.

MMA fans will miss the Edgar walkout that was always a run-out, set to the fitting soundtrack of "Kick in the Door" by the Notorious B.I.G. With that little-engine-that-could energy of his, Edgar would rouse up the crowd even before he'd set foot inside the Octagon.

But more than anything, the sport will feel the absence of Edgar's inextinguishable commitment to facing up to outsized challenges. He earned that respect over a decade ago when he beat a legend, BJ Penn, to become UFC lightweight champion, then took on all (bigger) comers at 155 pounds despite having a body better suited for bantamweight.

The 135-pound division has been Edgar's weight class for the past couple of years -- finally -- and that is where he concluded his career this weekend. This was not how he wanted to go out, with five losses in his final six fights, all but one by knockout. But "The Answer" was stoic in his appreciation for what he has.

"I got my family here," Edgar said. "That's all that matters."

Edgar never used trash talk or gimmicks to draw attention to himself. So it makes sense that he didn't want there to be pomp and circumstances surrounding the retirement fight. He would have preferred to quietly walk away when he was ready to be done. The problem was, Edgar always had more fight left in him. Saturday showed the rest of us that it was time, but Edgar knew himself. He understood that unless he made public his commitment to walking away, he would have just kept on fighting. Just like he always did, sometimes against all odds, over 15 unforgettable years. -- Wagenheim

Zhang Weili forces Carla Esparza to tap to reclaim her strawweight title in the co-main event of UFC 281.

After Zhang Weili beat Carla Esparza on Saturday night to win the UFC women's strawweight title for a second time, she made a poignant statement through her interpreter.

The past few years, Zhang has had a complicated relationship with the fans in the United States. America's complicated relationship with China did her no favors. Zhang was booed massively in April 2021 during her title defense against Rose Namajunas in Jacksonville, Florida. Namajunas ended up knocking Zhang out in just 1:18 of the first round. The reaction to Zhang was so bad that during her next training camp at Fight Ready in Arizona, they played boos over the PA system and had those in the gym hurl verbal insults at Zhang during sparring sessions as a method of preparation.

Zhang drew boos again here at Madison Square Garden last year, another loss to Namajunas. But this week in New York, the tide seemed to turn. Esparza, coming off a lackluster title win over Namajunas earlier this year, was the one getting booed at the news conference and on fight night. Zhang was getting a ton of cheers.

Maybe the American fans were not ready for the Zhang title reign a few years ago. But it seems like they are ready to embrace her as one of the best fighters in the world now, following a vicious knockout of Joanna Jedrzejczyk and now this submission win over Esparza. -- Raimondi

Adesanya-Pereira could have been Fight of the Year

It won't end up winning, because we like our Fight of the Year to be higher paced and include more back-and-forth flurries. More blood. You know, like Dustin Poirier and Michael Chandler earlier in the night. But the level of excellence in this title fight, man -- high-level chess. The technique, focus, physical preparation and strategizing. You can look at the fight and point to technical errors in the grappling, but in terms of each fighter playing to his strength and trying to maximize his chance to win, this was the most fascinating fight of the year to me.

These two have to fight again. This matchup is sublime. The fact that it could have ended in the first round, when Adesanya landed that big shot late, adds another wrinkle to it. You would imagine Pereira will only continue to improve his grappling over time. This is one of the best matchups in the UFC. -- Okamoto