For more from the 2016 Body Issue, check out espn.com/bodyissue! And pick up a copy on newsstands starting July 8.

Retiring early? Not so much. MMA fighter Conor McGregor is definitely still swinging. On the set of his Body Issue photo shoot in May, McGregor sat down with Kenny Mayne and talked about getting into the ring with Floyd Mayweather, fighting hungry and his strong Irish genes.

I dreamt every day of making it as a fighter, every damn day. Sitting on in the car park, on my lunch break, early mornings. I always visualized climbing the ladder of the fight game and reaching the pinnacle. 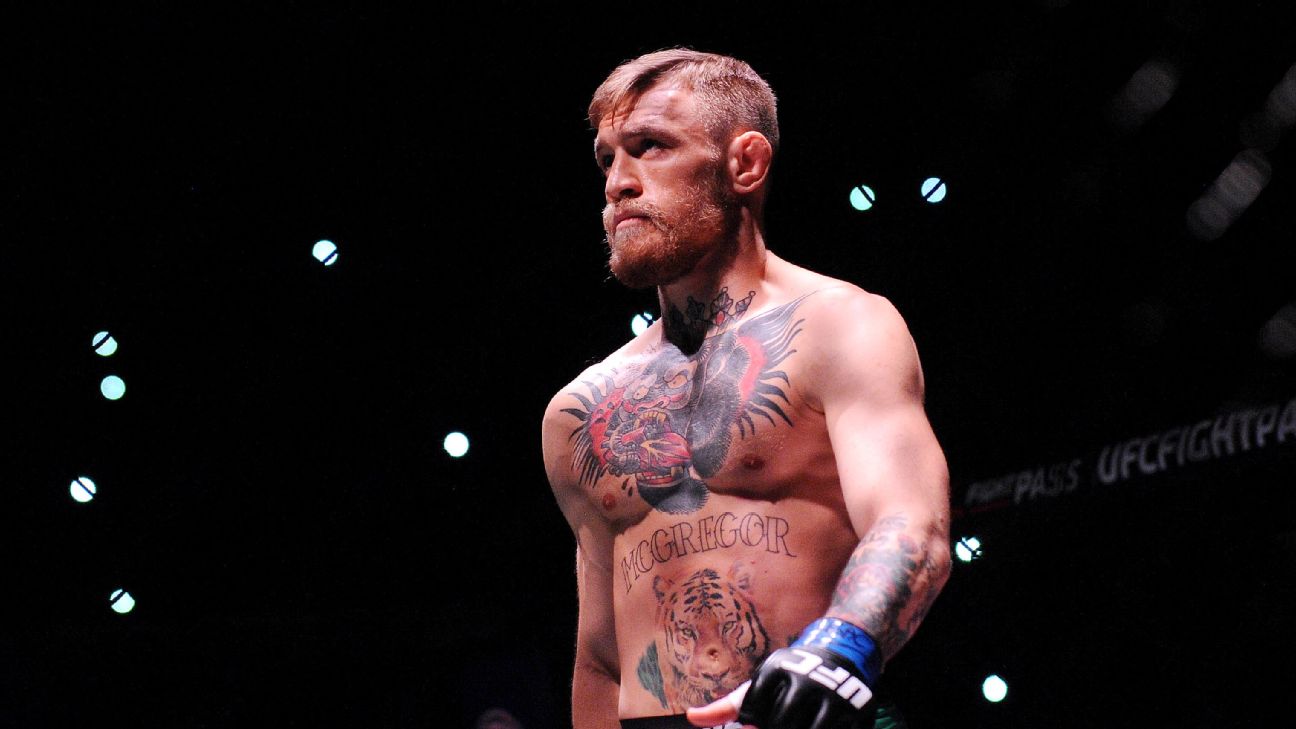 My unpredictability is what separates me. I move in many ways. If you move in so many ways, your opponent is not focused on what he's doing. He's focusing on what you're doing and it freezes him. When they freeze and you hit, they shatter like glass.

Verbal warfare is another form of warfare, so I look to engage in that 100 percent. It's just part of the game. It's part of the business. You beat him verbally, you beat him mentally and then finally you beat him physically. That's the three ways to beat a man. 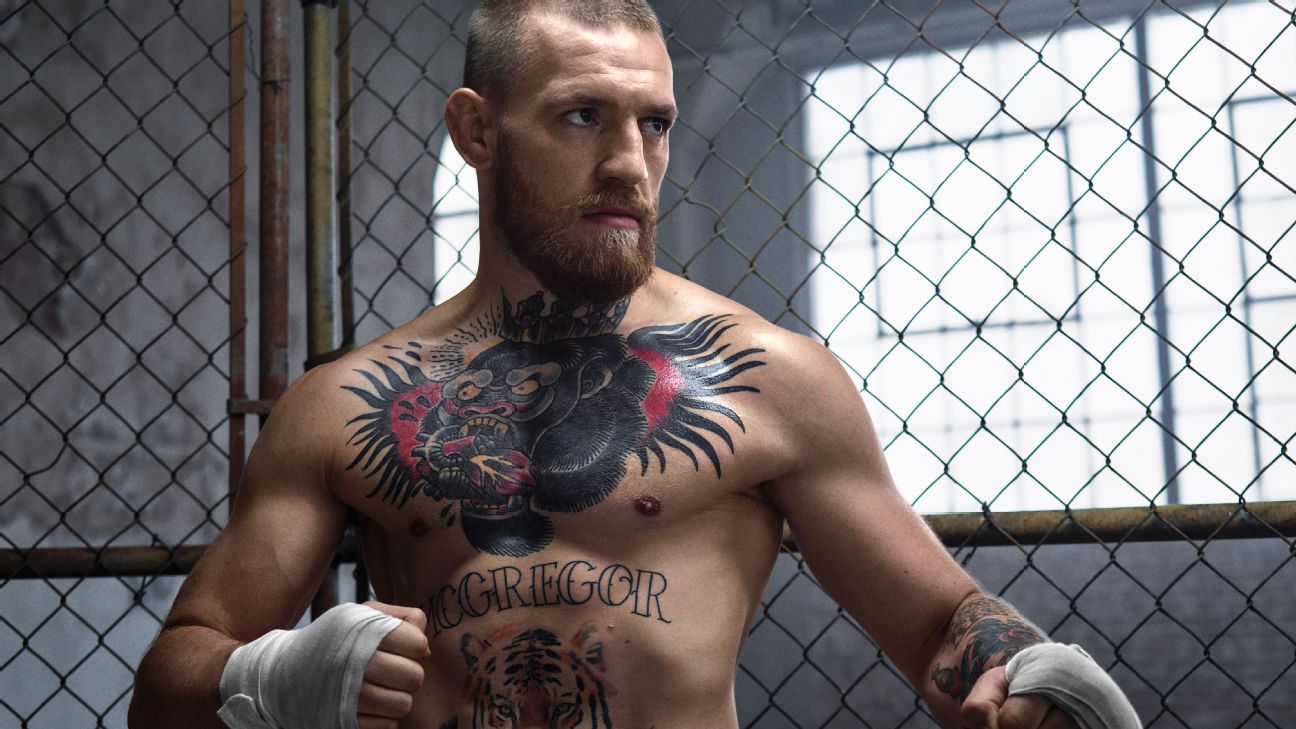 To go behind the scenes at Conor McGregor's Body Issue shoot, check out the full gallery of his photos. More »

Many people who practice in only one discipline of fighting are lying to themselves. You can't fight fully. It's limited. It's not the full circle. You're afraid of everything else. You're just doing this one single thing. But we practice in everything.

I am forever, forever learning. I think in the last fight [against Nate Diaz in March], I mismanaged my weight. I was working with my nutritionist for the lightweight title fight to make 155 pounds. I was on track. Nine days out from the fight, I'm in phenomenal condition, and then the weight got changed [to 170] and all of a sudden I'm 10 pounds below and I'm like, I don't need this diet because I need to eat up to the weight. So I threw that out. I disengaged from that. I started eating two steaks a day, two breakfasts. I'd have a coffee and some cookies with that, please, also. I'd be in the gym six to eight hours on fight week. I've got bags of energy. I can do this all day. But it came back and bit me in the ass. My body went into shock. I overtrained and then mismanaged the weight, and it came back to bite me on the ass.

When I'm cutting weight, I kind of baby myself to preserve energy to make the weight and to be energetic in the fight. But this fight I didn't even have to make weight. In fact, I was stuffing my face. I was heavier around the midsection. I wasn't as lean as I usually am, so my performance was hindered. My gas tank gave in. I had to take a very honest look at what I was doing with my preparation, so I have done that. I've brought in people specifically to monitor my cardiovascular. I'm doing something a little bit differently. So everything is a lesson and everything is a blessing.

I entered that last fight full. I was full in every sense. My plate was full, my belly was full. That's not why we fight. We originally fight for food, to eat. We fight hungry. The birth of fighting is to eat. So I'm happy with the lessons learned. I feel like my gut has been emptied again, like I am hungry again.

There ain't many people going up 25 pounds to fight on the drop of a hat, in nine days. I rocked up to 170 [for the Diaz fight in March]. Never fought at 170 in my life. I rocked up no problem. I slapped the head off of him for nine minutes of that fight. Look at his face. I busted him up. With the correct tank, the correct approach, I'm going to cakewalk this next one if we can get to that point.

When the tank goes, it's done. When you go past that line, no amount of skill can save you. There is no coming back from it in a fight.

I have a sweet tooth. But my nutrition is another thing that I've become obsessed with lately. Right now I'm following a strict nutrition plan, and I eat on the clock. My body is feeling good. It's not depleting me, because again, if I get the fight I'm looking for, it will still be up a weight. It's still the challenge I'm seeking.

"I think timing is the key -- surprise and timing. If you can master those two, you don't necessarily need brute force to put a man down." Conor McGregor

This is a what-have-you-done-for-me-lately business. And I'm cool with that.

You grow up where I'm from, you must learn how to defend yourself as a young man. I was no different. I got into it to learn how to fight, and that's why I walked into my first combat gym.

The left paw has done me well over the years. I'm not a scientist, I'm a martial artist. I did do one of those sport science things where they measured the time and my reaction. But all of that really means nothing in there. I think timing is the key -- surprise and timing. If you can master those two, you don't necessarily need brute force to put a man down. You place the correct shot at the correct time, you will put a man down.

Right now, I'm focusing on my skills, because the skills is what pays the bills. I'm also focused on my cardiovascular training. But you know, ask me tomorrow and it will be something else I'll become obsessed with. I'm just looking to learn, grow, stay focused and become a better fighter and a better athlete.

I tell you what, them Irish genes are good. They've served me well. We are made tough. We are made of steel. So I have no doubt the blood in my genes, the Irish blood in me has definitely stood me. My family's lineage, we are warriors. The McGregor clan, we are warriors all through. We are famous all through the world for our fighting capabilities of all generations. So I have no doubt that's stood to me and that led me down this path and gave me what I have.