Conor McGregor does two things very well: He fights and he gets on the mic after fights. McGregor was in top form on both fronts Saturday night.

After disposing of Donald "Cowboy" Cerrone in 40 seconds, McGregor held the T-Mobile Arena crowd in Las Vegas and viewing audience captive in anticipation of what he would say. Who would McGregor place next in line? Even Jorge Masvidal seemed intrigued.

And while he delivered a huge statement with the win, he left things a little vague by not calling out anyone specifically afterward. 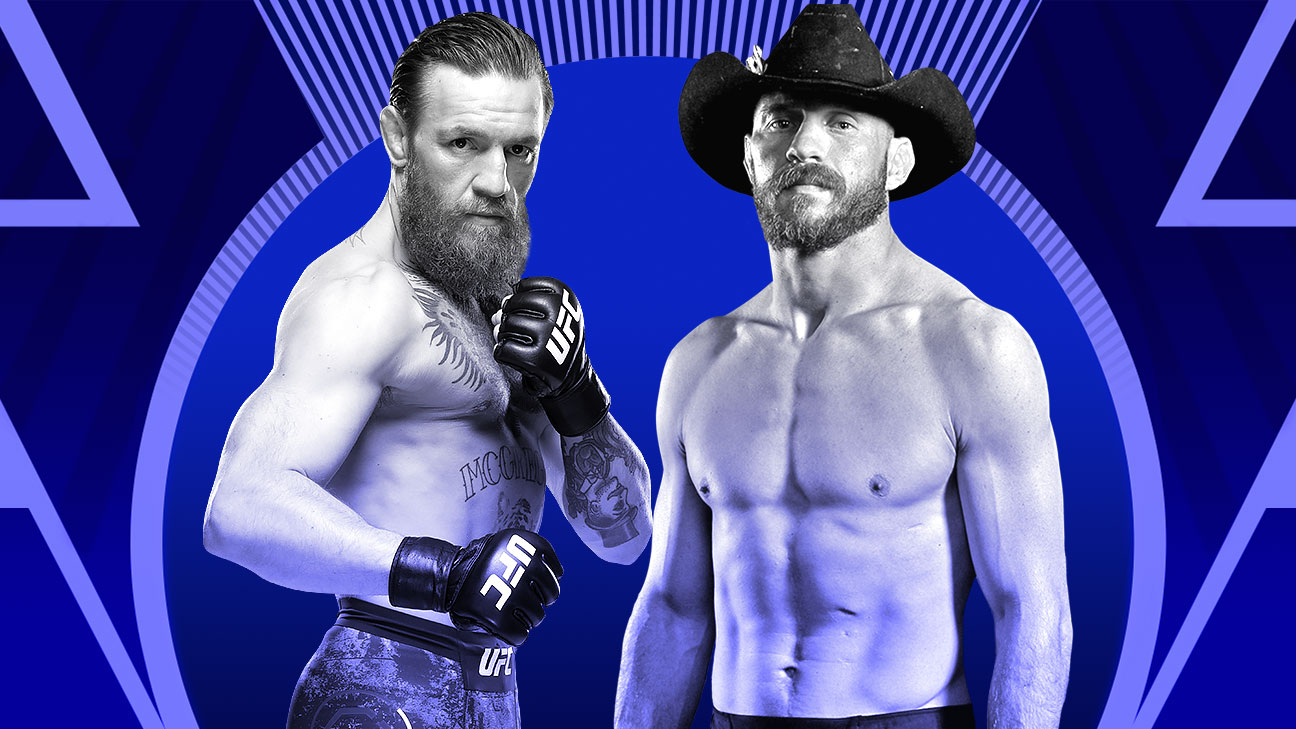 If the pay-per-view is purchased, all fights from UFC 246 are available to watch on ESPN+.

"I like this weight division," McGregor said of welterweight. "I feel really good. It's good going up and down [weight classes]. God willing I came out of here unscathed. I'm in shape. I don't believe I'm there yet, though. I still have work to do to get back to where I was. So I'm going to party tonight, celebrate, spend time with my family and then get back in the gym and train. And anyone of these little mouthy fools can get it, all of them."

McGregor also did some marketing for his Proper 12 Irish whiskey and talked about the satisfaction of scoring knockouts in three different weight divisions. And, of course, he addressed his fans.

There might not have been an opponent named, but the moment on the mic revealed just as sure as the kick that cracked Cerrone across the face, McGregor is back.

McGregor was respectful of Cerrone throughout fight week -- right up until the very end. Following McGregor's 40-second TKO of Cowboy, McGregor hugged Cerrone before leaving the cage. He then stopped to embrace Cerrone's grandmother, Jerry, who hugged him back and gave McGregor a kiss on the cheek. Cerrone and Jerry hugged right after.

Jerry, 82, is one of the most important people in Cerrone's life and career. She goes to every single one of his fights and has for years. Jerry was at T-Mobile Arena early Saturday, watching the prelims before the main card, long before the main event even began.

She follows MMA, not just her grandson. The hug between grandma and foe was a touching moment to put a cap on a stretch of days where McGregor has acted differently than he has in the past with his opponents. Even prior to the fight beginning Saturday night, McGregor bumped fists with Cerrone when he entered the Octagon.

As Dana White walked away after a television interview, it was brought to his attention that Floyd Mayweather posted a fake fight poster on Instagram. It was of a Mayweather-McGregor rematch. White said Mayweather was contacting him all night.

White has said he and Mayweather have a handshake deal to do some business, and it would involve Mayweather competing. McGregor said he's all for a rematch.

Tough night for some rising stars

Roxanne Modafferi throws a jab to Maycee Barber, who appears to hurt her knee as she falls to the canvas. For more UFC, sign up here for ESPN+ http://plus.espn.com/ufc.

What's that saying about the best-laid plans? Essentially, don't count on them, right? Especially in MMA.

The UFC did a magnificent job of constructing its McGregor-Cowboy undercard. Phenomenal. The event was littered with young talent, by design. The promotion knew the return of McGregor was enough to attract eyeballs on its own, and it wanted to use that opportunity to showcase some of its young, up-and-coming talent. So, it booked the undercard accordingly. Unfortunately, that's as much as the UFC could do. It was up to the youngsters to get it done.

That did not happen.

Usman's Twitter account was hacked during one of the biggest UFC pay-per-views in years Saturday. Just as the event began, a series of suspicious tweets surfaced from Usman's account. One allegedly even included the welterweight champion's bank account information. When reached by text by ESPN, and asked if he had written any of the tweets, Usman responded, "Lol, definitely not."

Usman's manager, Ali Abdelaziz, also confirmed on Twitter that the fighter's account had been hacked and the UFC was working on resolving the situation.

Several of the tweets were derogatory to McGregor, who said he was skeptical that Abdelaziz didn't have something to do with it. McGregor has a history with Abdelaziz, who also is the manager of Khabib Nurmagomedov.

"Because one came through early and it had all the hallmarks of that little f---ing weasel Ali," McGregor said. "(Some fighters) give him control of the accounts. This has been going on a while. He gets it and then writes something through their thing. The way the first one was written, I knew exactly where it came from. And then all of a sudden, a little bit heavier ones and then it became a hack job. Whatever. ... I don't think it was Usman. I don't know. I don't care."

Celebrities in the crowd

The NFL was well represented in the audience as Tom Brady, Baker Mayfield, Christian McCaffrey and Myles Garrett, among others, were in attendance. So was Dallas Mavericks forward Kristaps Porzingis. Actors Matthew McConaughey and Jeremy Renner also were on hand, as was Ludacris.

Cowboy's grandmother wasn't the only one offering hugs. As Barber was helped out of the Octagon by former UFC welterweight Ben Askren and another coach, they stopped by the stands so Barber could get a hug from her mother.

On her way backstage, @MayceeBarber receives consolation from her mother in the crowd ❤️ #UFC246 pic.twitter.com/YVP1I2AL2D

Diego Ferreira might be the most underrated fighter in the UFC's best division: lightweight. With his stunning submission win over former champion Anthony Pettis, the Brazilian has now won six in a row, which is tied for third among the longest active winning streaks at 155 pounds. The only two men who have better current runs at lightweight? No. 1 contender Tony Ferguson (12) and champion Khabib Nurmagomedov (11).

Pettis represented the toughest challenge of Ferreira's career, and Ferreira could not have performed any better. He took Pettis' back several times before finishing with an unorthodox neck crank while he didn't even fully have position.

Ferreira is a black belt in Brazilian jiu-jitsu, but lately has showcased more of his striking. He went back to his bread and butter at UFC 246. He has not lost since 2015. Ferreira's current run is another notch in the belt of Dallas' Fortis MMA and coach Sayif Saud. The gym earned 19 UFC wins last year with names like Geoff Neal on their own impressive streaks. And maybe the best part for Ferreira? Saturday was his 35th birthday. What a way to celebrate it.