DENVER -- It was once known as an age-old debate in this league. It is now just an old age question. 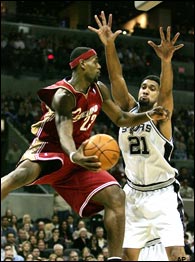 It's actually an easily forgotten question in these LeBron James days. LeBron has succeeded Kobe as the bearer of the Next Jordan burden, and perhaps the greatest tribute to the kid is that you never hear that question any more.

Whenever someone presents King James as the new heir to His Airness, no one dares to suggest that Jordan — who turned 42 on Thursday, incidentally — could compare to James when he was 20.

"When you think about his age and what he has done," adds NBA super fan Spike Lee, "he's a man-child."

Scottie Pippen's conclusive assessment: "No one can say that Michael was better than LeBron at LeBron's age right now."

It doesn't matter to even the biggest names in the game that LeBron James has yet to play a single minute of playoff basketball. Or that he's still so guarded in his interviews that he truly prefers to let us know almost nothing about him.

Almost everyone has seen enough already to know that we've never seen a 20-year-old like this one.

"I think he's doing fine," Jordan deadpanned last week. "I think the thing about LeBron ... he does what's best for LeBron and not what people expect him to do in relationship to what Michael Jordan did."

What he's doing is coming to Denver for All-Star Weekend as a Shaq-sized star attraction in what was supposed to be his buddy Carmelo Anthony's weekend. Shaquille O'Neal aside, no one bigger will be playing Sunday at the Pepsi Center.

It was just a year ago that 'Melo wasn't far behind 'Bron in the darling standings. James would wind up winning Rookie of the Year honors, but Anthony's Nuggets made it to the postseason, convincing many observers that (a) he should be the ROY and (b) Anthony would be the true host of the NBA's midseason showcase.

Turns out 'Melo didn't come close to earning a reserve spot on the West squad. 'Bron, meanwhile, is combining his size and athleticism with a court savvy beyond his years to a devastating effect. It's starting to look like he has a legit shot someday to live out his personal dream to average a triple-double for a whole season.

So big and sculpted, at 6-foot-8 and 240, James has TNT's Charles Barkley regularly joking that he must be from the Dominican Republic. Which is Barkley's politically incorrect way of suggesting that there's no way LeBron can be only 20.

Yet that's not what wows Jordan.

"The best thing about it is that he's a mature kid," MJ says.

And it's really that maturity, as much as the flashes of Magic and Michael, that makes LeBron such a strong bet to overcome all the Next Jordan negatives. You can be fairly certain hype or pressure won't be his problem, given how James has been dealing with MJ-like scrutiny since he was, oh, about 14.

"He loves being on stage," Cavaliers coach Paul Silas says. "I've never seen anybody as readily acceptable to that kind of thing as he is."

Says Orlando's Grant Hill, who knows as well as anyone what it's like to shoulder Next Jordan pressures: "He just has unbelievable composure for a guy so young, whether he's getting trapped or double-teamed in the post or dealing with the media and all that comes with it off the court."

No less impressive has been James' response to the few strains of adversity he has encountered in his hoops life.

He was chastised often throughout his rookie season about his shaky jumper. The response was spending day after day in a locked-doors gym getting ready for the Olympics with former Cavaliers assistant coach Bob Donewald. The agenda was simple: Just fix it.

"He's obviously got all-world talent, and he knows he's talented, but the level at which he works at [his game] is a class above," Donewald says. "Every shot he takes [in practice], every cut he makes, it's like a championship game to him.

"People talk about his shot being better, but it's just as much that his footwork is better. He didn't have to worry about his feet in high school because he was so good. But he knew he had to clean up his footwork, so that's all he wanted to do last summer."

Well, that's not all. He wanted to win a gold medal playing for Larry Brown, a coach James talked about even before he was drafted. Instead James came away with a bronze and limited minutes off the bench ... and came back to Cleveland knowing that his pal Carlos Boozer was now a member of the Utah Jazz.

Of course, the next time James whines out loud about any of that (or anything else) will be the first.

We know, we know. It all sounds like a too-good-to-be-true package. 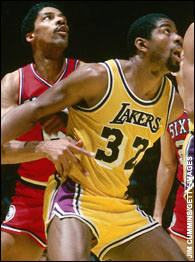 But so far it is. That label fits as James readies for his first All-Star start, having finished ahead of Allen Iverson, Jason Kidd and every other East guard in worldwide fan balloting.

It would seem, at this point, that only two variables can stop the slobbering from peers, pundits and the public.

The other is a lack of playoff success.

Jordan didn't win a title until his seventh season, and Bryant hasn't won one without Shaq as a sidekick, but there's also no forgetting that LeBron's next playoff game will be his first. Public opinion can change quickly if, say, Cleveland is a first-round loser this spring. So there's still plenty to prove, given that all the compliments and endorsements in King James' universe don't guarantee Jordanesque moments on the big stage.

Not that you'll find anyone to bet against James' winning the multiple rings he'll need to be classified as an all-time great. Not after a season and a half of somehow exceeding expectations that seemed impossible to meet when LeBron started wearing No. 23 for the Cavs.

"His passing ability is like a Magic Johnson, and his athletic ability is like a Jordan," says Cavaliers general manager Jim Paxson. "He gets 25 points, seven-plus rebounds and seven assists in the flow of the game. He doesn't force anything ... and that's pretty incredible to be able to do that at 20 years old and still have room for improvement in his game."

Yet Paxson adds: "Michael could be the greatest of all time, and LeBron has a chance to challenge that. But it will be dependant on how many championships LeBron wins, I think, to really determine his greatness as a player."

The city that shudders if someone merely whispers the initials M and J together?

"I think the most important thing was Mike's tenacity," Silas says. "He wanted to win — he wanted to destroy his opponent — and LeBron is developing that. And once that comes, there's no stopping him."

Says Jordan: "The comparisons, I don't think they're coming from LeBron. I think he welcomes that, as I did when I was compared with Doctor J, but I think he's just trying to be LeBron."

"In time," Orlando's Hill believes, "...I think people will be saying 'The Next LeBron.'"

Maybe not by Monday, but check back in June.