DENVER -- On Monday, we get to this week's Power Rankings. For Sunday, coming off the All-Star Game, here's a list of 13 things to watch for with about 30 games to play ... 13 being the number because our original plan -- a tribute to the All-Star Game MVP -- would have made for a short list, since Allen Iverson wears No. 3.

1. The trading deadline is Thursday, but don't be greedy and pout if we don't see another major deal between now and then. 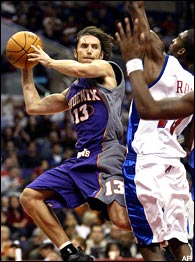 You will hear plenty this week about Michael Redd, Gary Payton, Lamar Odom, Carlos Boozer and even Peja Stojakovic changing teams. Just don't expect any of them to actually move. It's been a busy-enough trade market as it is, and in most cases the employers of the names above (especially Milwaukee and Sacramento with Redd and Peja) don't plan to deal away the assets in question.

2. Alonzo Mourning is expected to join the Heat this week to back up Shaquille O'Neal and, yes, play alongside him in spots as a power forward.

What we'll find out next is whether that makes Miami the favorite to win the East, or whether it merely gives the Heat a better chance to compete with surging Detroit, which has quietly rallied from a 7-8 start to bring a better record into the stretch run than it had last season at the break: 32-19 compared with 33-21. I'm far more inclined to back the Pistons, a group that has won a championship together, as opposed to a Heat team that hasn't won anything collectively yet.

I'll likewise have to see Shaq and Zo play nice to believe it, recalling an interview I did with Daddy Diesel for Maxim magazine in 2001 in which O'Neal said he'd rather fight Mourning than anyone else in the world ... until he remembered Zo's kidney problems and nominated Lennox Lewis instead.

3. The Phoenix Suns have looked like a tired team lately, and not just because Steve Nash is nursing a tender hamstring. But we suspect Phoenix will actually be fine in the playoffs playing its helter-skelter style ... so long as the referees continue to call the games as they have, outlawing contact on the perimeter. After all, refs have been calling touch fouls deeper into the season than most cynics expected.

And if you're looking for omens, consider that Chicago is the only team since 1990 to win the championship after posting the best record at the All-Star break. The Bulls did it three times in that span with Michael Jordan, but perhaps karma is with Phoenix after last Thursday's loss to Dallas made San Antonio the league's leader at the break.

4. Scott Skiles is in his option season, but dare we say his contract will be extended.

And if Chicago continues its surprising resurrection from an 0-9 start to make the playoffs, Emeka Okafor is in trouble, no matter how surprising Okafor and his expansion Bobcats have been. Ben Gordon is making a major Rookie of the Year (and Sixth Man Award) push with 10 20-point games off the bench. (Make it 11 after his heroic 29-point performance to beat the Heat 105-101 in overtime on Tuesday.) That's the most for a rookie since James Worthy did it 13 times in 1982-83.

5. Who will win the Titanic Division and claim the East's No. 3 seed? Boston, Philadelphia or New Jersey? More important, who will claim the coveted No. 6 seed and the chance to play the Titanic winner? And will that team be accused for tanking to get the sixth spot? Commissioner Stern says the league will be watching for tankers.

6. Who will claim the No. 8 spot in the West? Wolves, Nuggets or Lakers? For the record: Boston remains our Titanic pick -- we picked the Celtics before the season and see no reason to audible -- and the feeling here is that No. 8 in the West comes down to Minnesota and Denver. We picked the Lakers to miss the playoffs when the season started ... and see no reason to audible after seeing their road-heavy remaining schedule.

7. Will any of last season's four division winners make the playoffs? If the season ended today, only the Lakers would -- Indiana and Minnesota are ninth in their respective conferences, and New Jersey is 10th in the East. The four-division format used until this season was instituted in 1970-71, and never did more than one division winner fail to reach the playoffs in the following season.

8. Only four more 50-point scorers are needed to establish a single-season record. There were eight different 50-point scorers in 1989-90 and seven as recently as 2000-01. Scoring, meanwhile, continues to be higher than it has been for a half-decade, with seven teams averaging 100 points (not counting Orlando at 99.9) and the league average at 96.7 points per game, highest since 97.5 ppg in 1999-2000. Long may it continue.

9. One of these four men will win the NBA's MVP trophy: Nash, Tim Duncan, LeBron James or Shaquille O'Neal. Nash holds the lead on this ballot entering the season's final third -- "Unbelievable," he says -- but Phoenix probably has to win as many games as San Antonio (or thereabouts) for Nash to hold off the two big men and King James and become just the second true point guard to earn the game's highest individual honor in 40-some years.

10. You're right. Reigning MVP Kevin Garnett probably joins the race above if he can rally the Wolves into the postseason ... and thereby set up the delicious prospect of a San Antonio-Minnesota matchup in the first round. Dirk Nowitzki is another top-five candidate. And Iverson is bound to join the conversation, too, if Philly makes the playoffs in what AI considers his best individual season so far. Even better, Answer believes, than his MVP campaign of 2000-01. "I'm glad it's on me -- I like the question being on me," Iverson said during All-Star Weekend. "People are saying I'm having an MVP year, but I want them to say I'm the best player and I'm making everyone around me better."

11. In a season filled with shockers already, this might rank as the biggest: After Tuesday's victory at Houston, Seattle's magic number to clinch the Northwest Division title is a mere 20. If they win only 10 and the Wolves lose only 10, the Sonics win. In other words, the Sonics win.

12. Chances are we will not know for sure by April where Phil Jackson will be coaching next, or where Flip Saunders is headed, or if Jerry Sloan is going to follow John Stockton and Karl Malone into retirement. Yet you only have to wait about two months to see LeBron on the playoff stage for the first time. "He represents all the schools," said an admiring Julius Erving. "Old school, new school, middle school."

13. Considering that Le Commish and union chief Billy Hunter privately addressed both All-Star teams Saturday as a tandem, maybe a new labor deal before July 1 is a real possibility, as both sides claim. So what if the league is looking for shortened lengths on guaranteed contracts, an age minimum, a stricter drug policy, tougher luxury-tax penalties, Stern's continued (nearly) ironclad jurisdiction over all disciplinary matters and a real, affiliated minor league ... with no mention of what it plans to surrender in return? Hunter has never been able to stop Stern before.