DENVER -- The unofficial ambassador of this year's All-Star
Game got his chance to show that he, too, can play this game. 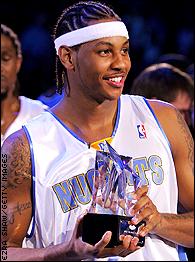 Carmelo Anthony took advantage of that opportunity, scoring 31
points Friday night to lead the sophomores to a 133-106 victory
over the rookies in a matchup between the top stars from the two
classes.

"It's another positive thing I can put on my resume," Anthony
said.

It was his only on-court appearance of this All-Star week -- a
period he has spent hosting parties, fund-raisers and generally
showing his friends a good time around his adopted hometown.

Given his one chance to play, Anthony teamed with LeBron James
for the first time since the Olympics, and fell just three points
short of his season high with the Nuggets. He was the game's Most
Valuable Player.

"I know he can play the game of basketball," James said.
"Things haven't gone his way so far this year, but he's trying to
get his mind straight. I'm so happy for him that he got the MVP
tonight. It was supposed to happen this way."
Recuperating from an injured ankle and a bout with the flu,
James had 20 points. Dwyane Wade finished with 12 points and nine
assists.
Even though this game will go down as a footnote during a
weekend full of them, Anthony said he was glad to have played well.
"I go out there and I play basketball," he said. "I can't put
my head down because I didn't make the game. Like I tell everybody,
this is only my second year in the NBA. I'm going to be here for a
long time. I'm not going anywhere."
Anthony's accomplishment came in a game that was surprisingly
competitive.
Led by a handful of dunks by Tony Allen of the Celtics, the
overmatched rookies -- who came in mainly seeking to avoid
embarrassment -- held their lead into the second half.
Not until James made a 16-footer with 16:47 left did the
sophomores take the lead for good.
"The sophomores spoke about it in the locker room at
halftime," rookie Luol Deng said. "They came out and played with
some intensity and we could see that."
As the half drew on, the sophomores' lead widened and play
loosened up, although it never reached the silliness of last year's
game, a 142-118 win for the sophomores that devolved into little
more than a dunking contest.
Commissioner David Stern promised that scene wouldn't be
repeated this year, and made it clear he wanted players' best
efforts in this exhibition. 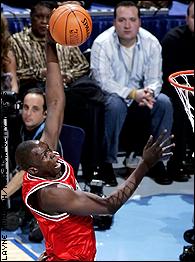 "He didn't want the game like it was last year," Anthony said.
"It got a little out of hand, which we all agreed on."
With their coach, P.J. Carlesimo, pacing the sideline, Allen,
Deng and Al Jefferson led the rookies with 17 points each.
Chris Bosh had 26 points and 14 boards for the sophomores and
Kyle Korver had 21.
But Anthony was the star and the fan favorite. His fiance, MTV
VJ La La Vasquez, watched from her customary seat at courtside, and
every move he made was greeted by oohs and ahhs from the fans.
The game, as usual, was filled with great dunks, none better
than one early in the game when Wade feathered an underhanded pass
in the lane up high for James, who slammed it down hard.
James finished with four slams -- including a thundering windmill
dunk -- but that's all the fans will see until Sunday. He declined
an invitation to participate in Saturday's dunk contest. Earlier in
the day, he said it was because he didn't feel well enough. After
the game, he told a different story.
"Why don't guys do it anymore? Because all the dunks are
taken," James said. "There are no more dunks. If we come up with
some new dunks, people might do it. Every time there's a dunk out
there, people say they've seen it before."