What should've been Andre Iguodala's second trophy ceremony of the weekend turned out to be a slam dunk of a controversy as Nate Robinson was crowned champ on NBA All-Star Saturday.

Which left Iguodala holding nothing but the short end of the stick, thanks to judges who appeared to favor the little Knick.

Even though it was obvious to the crowd that Philly's swingman delivered the best dunk of the night in the first round, catching an Allen Iverson pass off the back of the glass and gliding under the backboard and rim for a reverse-slam on the other side. And then running off the court and down the tunnel as if to say it was over.

"Andre's behind-the-backboard dunk, that was crazy," said Josh Smith, the defending champ who said he'd never try that even after seeing it completed. 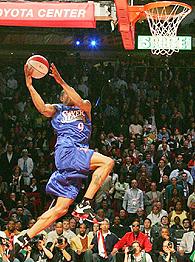 Said Iguodala, "I came up with that one day during the summer. I was in the gym and this guy told me I couldn't touch one side of the backboard and come to the other side and dunk the ball, and I did it.

"It came from that and I'm glad I got a chance to show it to the crowd."

It was a creative, athletic display of fearlessness, especially since he had scraped his face on the bottom of the backboard on his first attempt of the dunk. He even followed that up in the final round with another perfect 50 on a flush featuring a behind-the-back, hand-to-hand transfer.

He caused so much electricity in the Toyota Center that it apparently caused a short circuit at the judges' table -- a mental short circuit, anyway.

That's when Nate-Rob, showing character and persistence, got himself back in the competition, walking across the court and handing Spud Webb his old Atlanta jersey No. 4. With Webb in his new duds, Robinson caught a bounce pass from the onetime dunk champ and jumped over all 5 feet, 7 inches of him for a spectacular jackknife slam, finishing in a squat that he held for effect. 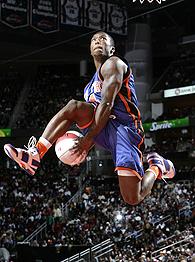 Bringing the house down and the crowd up in the air.

"My teammate Jamal [Crawford], we were on the plane and he was like, 'I have the perfect idea, you should jump over Spud Webb.' And I was, like, 'That is a good idea.' "

The judges thought so, too, awarding Robinson with a 50, and then lowballing Iguodala with a 44 on his next attempt to force the first tiebreaker in the competition's history. The judges even looked like they were in cohoots, glancing at each other before they revealed their scores.

Either way, it was what everyone in the arena wanted.

That is, it's what they thought they wanted, until Robinson took 14 tries to complete his jam during the dunk-off. The final product was a thing of beauty as he performed an unthinkable transfer of the ball between each leg before passing the ball with his left hand off the glass -- all while midair -- and then catching it for the throw down. But as each failed attempt went on, the air slowly leaked out of the building and Iguodala was kept waiting on the sidelines trying to stay loose.

"I had a few things I wanted to do," said a subdued Iguodala, who would lose the overtime session by a point. "But it's tough when you're sitting around and you get stiff.

"But Nate did a good job out there. He deserved to win."

Webb certainly thought so, but he also chimed in on the inconsistent scores.

"They shouldn't get big guys to judge contests," Webb said. "Because they don't know good dunks."

Josh Smith, too, was miffed by the scoring.

For his opening dunk, he got the crowd on its feet by having a piece of masking tape placed foul line extended. Then, running the length of the floor, he completed a never-before-done two-handed jam after taking off with a foot on the free-throw line, even doing a little double pump for flair.

He received a score of 41, which put him out of the running early, along with Memphis' Hakim Warrick. His tape stunt had unfortunately misled the crowd and the judges.

"Obviously I was disappointed, but I can't get mad," he said. "I mean, it's a fun event and we pleased the crowd and added some spunk to the weekend. Nate and Andre put on a show."

Unfortunately, the judges stole it.

Matt Wong is an NBA editor at ESPN.com.