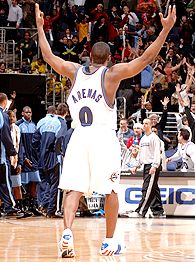 The Washington star surged past Vince Carter in the final days of All-Star voting to claim the second Eastern Conference guard spot by 3,010 votes Thursday, the fourth-closest margin for a starting spot.

LeBron James, the MVP last year, led all players with more than 2.5 million votes for the Feb. 18 game in Las Vegas.

The first All-Star Game held outside an NBA city will maintain one traditional look: Shaquille O'Neal was chosen to his 14th straight All-Star Game, tying Jerry West and Karl Malone for the most consecutive selections.

"It is an unbelievable feeling," Arenas said. "Two years ago, I was voting myself in for the game. Now fans are voting me in, and I'm going to do what they are looking for. I've got something to give back to the fans during All-Star weekend."