LAS VEGAS -- David Lee still sports the remnants of a black
eye, sustained in a recent game while trying to prevent a dunk. 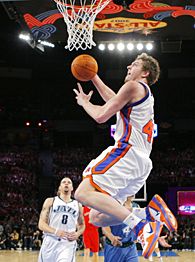 The NBA's leading shooter had a field day in a game with no
defense, going 14-for-14 from the field and scoring 30 points to
lead the sophomores to a 155-114 victory over the rookies in the
rookie challenge.

"I don't think there was going to be any flagrant fouls or
anything by either team tonight," Lee said. "It was a pretty
wide-open game."

Monta Ellis of Golden State added 28 points on a number of dunks
as the sophomores set a game scoring record, surpassing the 142
points they scored in 2004. They shot 74.7 percent (68-of-91) and
have won the last five games.

Lee, who leads the NBA in field-goal percentage at 61.2 percent,
was voted the game's MVP. Chris Paul, the reigning Rookie of the
Year, added 16 points, 17 assists and nine steals.

Rudy Gay of Memphis and Utah's Paul Millsap each scored 22
points for the rookies, who never led and trailed by as many as 43
points.

"Next year, when we come back, we're not going to be as happy
to be here," Portland's Brandon Roy said. "We're going to be
ready. They caught us off-guard."