LAS VEGAS -- The first time Kobe Bryant won this award, he
got booed in his hometown of Philadelphia.

He picked up his second Most Valuable Player trophy from the NBA
All-Star Game much closer to his West Coast home -- and the Los
Angeles Lakers' guard got nothing but love in a city that adores
its showmen. 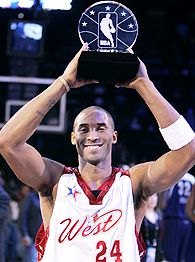 Bryant scored 31 points in the Western Conference's 153-132
victory Sunday night, leading a dominant offensive effort as a
scorer and playmaker for a roster short on point guards.

Five years ago, Bryant also scored 31 points in the West's
victory in Philadelphia -- but the famously crusty fans booed him
every time he touched the ball, eventually roaring their
disapproval when the kid from the upper-class suburbs got his MVP
trophy.

While declining to directly address the Philadelphia brouhaha,
insisting "Philly was great," Bryant was determined to enjoy this
moment under neon lights.

"As players, we always want to feel like we're appreciated for
what we do," Bryant said. "To have this type of reaction here in
this All-Star game is very humbling. I just feel very blessed to be
able to come out and put on a really good show."

Bryant was visibly shaken by that reaction in Philly -- but five
years afterward, he got nothing but cheers all weekend long. The
rehabilitation of Bryant's national image after his well-documented
sexual-assault controversy also took yet another step forward with
a sterling performance in the league's midseason showcase.