Now that the Boston Celtics matter again for the first time since Starter jackets were cool, we need to clear up the old misconception that rooting for them to win the championship would be like rooting for Vanilla Ice to win a Grammy.

The Celtics' acquisition of Kevin Garnett and their early-season success have stirred up some conflicted feelings in the black community. I've seen it in e-mail chains, heard it in phone calls. African-Americans would like to root for these Celtics, but

Let's just say it: To fans who came of age during the NBA's glory days of the 1980s, the Celtics have long been considered a "white team." They were Larry Bird's team when Magic Johnson and the Lakers were the other choice. The Celtics were the squad that had Danny Ainge, Kevin McHale, Jerry Sichting, Greg Kite, Bill Walton, Scott Wedman and Rick Carlisle on the roster long after the league had taken on a darker complexion. It didn't help that they were representing Boston, which had a long-standing reputation -- fueled in part by stories Bill Russell told -- of being an unfriendly location for African-Americans.

Add it all up and you had no love for the Celtics.

When Spike Lee took a guest editor role at Spin magazine in 1990, he ran a photo essay on the meaning attached to different sports apparel. Under a picture of a black man wearing Celtics gear it said: "This man is an Uncle Tom."

In the 1992 Public Enemy song "Air Hoodlum," Chuck D rapped about a basketball phenom who was "so quick at 6-foot-6, down to be picked by anyone but the Celtics."

That was the prevailing attitude. And it was rooted in ignorance.

Part of that's because, prior to the 50th anniversary season of 1996-97, the NBA never did much to promote its history. While everyone knew the role the Dodgers played in integrating baseball, most people didn't realize the Celtics were the Dodgers of basketball, the Texas Western of pro hoops. 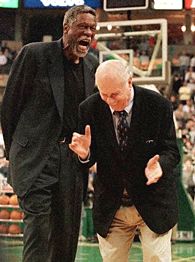 The Celtics were the first NBA franchise to draft an African-American player -- Chuck Cooper in 1950. They became the first NBA team to send an all-black starting lineup onto the floor. The man responsible was the same guy who put together the Celtics teams of the 1980s: Red Auerbach.

"I wasn't even aware of it," Auerbach once said about his historical lineup breakthrough in 1964. "They brought it to my attention later on. All we were trying to do here, all the time, is play the guys that, in our opinion, whether I'm coaching or someone else is coaching, is going to win the ballgame. That's all."

The Celtics made Russell the league's first black head coach. To date, only four black coaches have won a championship, and two of them were Celtics: Russell and K.C. Jones.

In college I had an African-American studies professor who used to check out the pickup basketball games at the rec center after he finished his workouts. After watching my push-it-up-and-dish-it style he told me I'd be a good fit for the Boston Celtics. I felt insulted, as if he'd told me my singing style would make me suited for the Partridge Family. But to older heads, the Celtics were innovative racial groundbreakers and pioneers of the up-tempo game (in 1960 they averaged 124.5 points).

The Celtics didn't just plug their African-American players into the lineup haphazardly. As Nelson George detailed in the book "Elevating the Game: The History and Aesthetics of Black Men in Basketball," the Celtics utilized African-Americans in ways that defied the stereotype of black players as flashy, athletic scorers. Starting with Russell, the black Celtics players were renowned for their defense, the aspect of the game associated with determination and hard work. That even carried on into the 1980s, with Dennis Johnson's playing the role of perimeter defensive stopper on the Celtics' last two championship teams.

In the ultimate irony, the lineage of John Thompson's Georgetown Hoyas -- who emerged as Black America's team at the same time the Celtics were at their palest -- could be traced back to Boston. Thompson learned his defense-first mind-set while playing for the Celtics in the 1960s.

One of the least-discussed "what-ifs" created by the death of Len Bias is how he would have changed the perception of the Celtics.

It's pretty much conceded that the Celtics would have at least one more championship banner if Bias had not overdosed on cocaine shortly after the Celtics took him with the second pick of the 1986 draft. But would his presence have altered the way we thought about those teams? Put Bias in the mix with DJ and Robert Parish, and the Celtics would have had three black players in their top rotation. And Bias' style, including his trademark reverse dunks, would have pulled in fans of all races. Yes, you would have seen green Celtics caps in the hood.

I'd like to think we've done some growing up as a culture since the 1980s, that the notion of racially polarizing teams like the Celtics and Hoyas has gone the way of cold war Olympic showdowns between the United States and the Soviet Union.

Michael Jordan's Chicago Bulls teams didn't split the country along racial lines; they brought fans together in appreciation of the greatest player of his time. For me, the greatest example of Jordan's transcendent power came the day after he dropped the double-nickel on the Knicks in the Garden. I had to do some paperwork in the accounting department, and when I handed in my forms to an older white woman, she asked, "Did you see that game last night?"

The league doesn't break down simply as black and white anymore. There are Chinese players, Spanish players, you name it. The past two MVPs were from Germany and Canada.

And the Celtics have come full circle. Of the top teams in the league right now, the Celtics are the only one with an all-black starting five and a black head coach.

Maybe the question shouldn't be whether it's OK for African-Americans to root for the Celtics. If you really think about it, the question is, how could they not?

J.A. Adande is the author of "The Best Los Angeles Sports Arguments." He joined ESPN.com as an NBA columnist in August 2007 after 10 years with the Los Angeles Times. Click here to e-mail J.A.