Shawn Marion was bringing the good news. If you're a Lakers fan.

More than that, he said he talked to Kobe Bryant, and Bryant "embraced it." 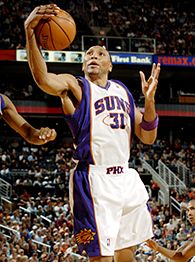 Said Marion: "He wants to make it happen."

If Bryant cares about what trades the Lakers make and thinks adding Marion would help, at least it's an indication that he's thinking about the Lakers as "we" not "them."

Still, it's hard to miss the irony of Marion's wanting to fulfill his desire to be traded by joining a guy who kicked off this summer's stream of trade wishes. Bryant's radiothon at the end of May started a trend followed by Jermaine O'Neal, Andrei Kirilenko and now Marion.

"My name has been mentioned in trades over and over," Marion said. "I'm tired of hearing about it. It's time for me to take the next step and leave.

"It's like a bad marriage. It's time to get up. I love my fans, I love the city, I love my teammates. I just think it's time for me to leave."

The simplest way for him to get to Los Angeles would be for the Lakers to send Lamar Odom to Phoenix. Their salaries are close enough (Marion is making $16 million this season, Odom $13 million) and the cost-conscious Suns would shave $3 million off their payroll.

Of course, no trade in the NBA is ever easy. Odom needs to show that he has recovered from offseason shoulder surgery; it's the second time his shoulder has been operated on in two years. And no team likes to trade a key player within its division. (Lakers general manager Mitch Kupchak, not talking about any specific moves, told Los Angeles radio station KLAC on Monday that the Lakers would not make a trade before training camp starts next week).

The Suns have said they wanted to keep their core intact -- and included Marion on that list, along with Steve Nash and Amare Stoudemire. They took a step backward competitively when they traded big man Kurt Thomas this summer to shave his $8 million salary, but said that would let them keep their big guns. But they also contemplated breaking up the nucleus, whether by trading for Kevin Garnett or sending Marion to the Boston Celtics.

Owner Robert Sarver has long been wary of going over the luxury tax threshold, which is why Marion -- the highest-paid player on the team -- has spent more time on the trading block than the negotiating table, his desire for a contract extension (at a reported $60 million for three years) not being met. So if the Suns don't want to keep him around, he doesn't want to stay around.

"They're not talking extension," Marion said. "It's not even relevant to even talk about. All the stuff that's going on, nobody's doing what they're supposed to do. I could tell you a thousand things, but for what? People are going to say what they say, do what they do. It's run its course."

In an ideal world this would be only about winning. Marion would want to stay with a team that won 177 games and made two trips to the conference finals the past three seasons. And the Suns would want to keep an integral, often-overlooked player who helped make it happen.

But this is about business. Sarver has the right to look after his business interests. But his team is a collection of small business owners themselves, including Marion Inc., Nash Enterprises and Stoudemire LLP. And they have only a limited time to maximize their profits. The downside of the NBA's collective bargaining agreement, with its salary cap and luxury tax, is that it pits all of these businesses against each other when they should really be on the same team.

So would $20 million a season for Marion be a good investment? Well, Stephon Marbury will make $20 million this season. And who signed Marbury to that contract extension that will bring another $21.9 million in 2008-09? Why, the Phoenix Suns. But that was four years ago, when the Colangelos were running things. And that's the Knicks' problem now, thanks to a January 2004 trade.

Marion sometimes went overlooked in the Suns' dazzling display. Nash has been the centerpiece in their broadband offense, with two MVP trophies to show for it. Stoudemire made first-team all-NBA last season. But two of the most memorable Suns plays over the past two seasons involved Marion, and you probably don't even know it. He grabbed the offensive rebound that led to Tim Thomas' shot that let the Suns pull out Game 6 against the Lakers in the 2006 playoffs. And he chased down the offensive rebound and set up Nash for a 3-pointer in the Suns' big regular-season statement game against Dallas last March.

Marion has hit some 3-pointers here, thrown down some dunks there, and played defense everywhere, guarding point guards to post men. Sometimes he feels unappreciated, but he said, "I do get love."

He sure gets computer love. This past season, the folks at 82games.com created a formula to determine the defensive player of the year, crunched the numbers and came up with Marion.

Four years ago I had the No. 1 pick in an online fantasy hoops draft and was all set to take Garnett (in what turned out to be his MVP season). But I couldn't get logged in and the computer selected for me. It picked Shawn Marion.

He does a little bit of everything. The knock has been he's never been the master of one thing, the franchise guy. If he joined the Lakers, he wouldn't have to be. Marion knows Bryant still would be the guy taking the bulk of his shots. Marion could wait in the corner and throw up that funny-looking jumper when Bryant found the middle too clogged. He would upgrade the Lakers' athleticism quotient and help them defensively.

It's easy to see how this could help the Lakers, especially if it was enough to mollify Bryant. It wouldn't make as much sense for the Suns, unless they decided that having an unhappy Marion would be detrimental to the team chemistry, counterproductive  and thus bad for business.