Ultimately it was the calendar that killed Reggie Miller's thoughts of coming back to the NBA.

It was Thursday, the day before his 42nd birthday, and Miller tried to project six to seven months in the future. How would it feel to wake up in a Memphis hotel room in March and prepare for the Boston Celtics' 61st game, with the playoffs still six weeks away? 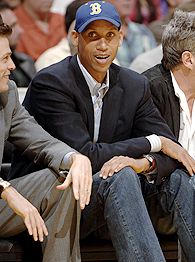 The grind got him. Not the physical toll, not the whole "tarnished legacy" thing, not slipping skills.

"I can still shoot with the best of them," the NBA's all-time 3-point leader said.

He knows how excited he would have been in October to resume his career after two years in retirement. November, December, even the first part of January would have been intriguing to him. But that's when the season hits a hole, when it seems like the games and flights and shootarounds keep coming with no end in sight.

"Mentally, I don't know if I can do eight months," he said. "February, March, I would have been dead."

So the experiment was over before it really got started. A couple of weeks after telling ESPN.com that he was considering coming back to play with the Celtics, he told the Indianapolis Star that it wasn't going to happen.

Maybe he should have asked for one of those Roger Clemens deals, shown up halfway through the season and gotten clearance to head home whenever he wanted. But basketball doesn't work that way. As monotonous as the regular season might be, it's still vital for teams to establish themselves, find something that works, develop a rhythm. No shortcuts. Michael Jordan tried it in '95, coming back in March. He went out in the second round of the playoffs, upstaged by Nick Anderson and the young Orlando Magic.

Oh, and speaking of Jordan ...

It wasn't championship-or-bust. The Eastern Conference finals would have been good for him, enough to let him know the return was worth it. He was intrigued by the chance to play with Garnett. Sure, Ray Allen and Paul Pierce are nice, but Miller sniffs, "I've done them." He got most two-guards one way or another, even had his moments where he upstaged MJ.

But Garnett? Think about it: Miller never played alongside a certain Hall-of-Famer. During his 18 years with the Indiana Pacers there was Chuck Person, Detlef Schrempf, Rik Smits, a couple of Davises, Jermaine O'Neal. All-stars, but not all-timers.

Garnett is different. With Shaq on the decline, Garnett immediately becomes the best big man in the Eastern Conference. He was clearly the best player in the league as recently as 2004. That was the year he had a healthy and motivated Sam Cassell and Latrell Sprewell alongside him and made it to the conference finals. All of a sudden he has weapons beside him again.

"Right now he's a kid in a candy store," Miller said. "It's gonna be unbelievable. I wanted to be part of that. He is going to have an unbelievable year with or without me. I've admired his game from afar. When Danny Ainge called, I said, 'Oh my God, I have a chance to play with Kevin Garnett!'"

It was enough to make him shift from preparing for a another season of speaking into a microphone for TNT (with a preparation routine consisting of nothing more than lifting the remote control) to rigorous workouts twice daily.

"The first five days my body told me not to," Miller said. "Once I got past that, my body felt great."

You don't hear those words coming from an NBA player's mouth in February. People used to joke about using fake injuries to open spots on the active roster, but the trainers would tell you every player has some type of legit injury by the second half of the season; it's just a matter of getting them through the next game, then on to the next city.

What does it say about the length of the NBA season when Miller says even the novelty of a last hurrah with a dream teammate would fizzle out sometime after the All-Star break? But of course, the owners would never give up the revenues that come with a season that's some 20 games too long.

Are they being selfish? Sure. But one other thing this episode taught us was how selfish sports fans can be as well.

Pacers fans who had rooted for him his entire career were sickened by the thought of him in Celtics green. Even fans who loathed him when he hit big shots against their teams fretted that he would weaken their memories of him if he came back as a diminished version of his old gunslinger self.

But who would be harmed, exactly? Would anything he did erase the memories of his 25-point fourth quarter or eight-point minute in Madison Square Garden? They'd still exist. So would his record for the most 3-pointers in NBA history, which would only have increased with every long jumper this season.

Athletes have a right to be selfish when it comes to their careers. Fans don't. Athletes have a limited window to do this. They also have that singular drive, that arrogance that thinks they can defy the odds and be the exceptions. That's how they made it to the pros in the first place.

Miller wasn't fooling himself. He knew he wouldn't be an All-Star. He just wanted to make contributions -- especially in crunch time.

"I told Kevin I want to be able to carry my own bags," he said.

He just doesn't want to be living out of a suitcase come February and March.

It's over. He's told Ainge, he's told Garnett that he won't be playing, and he doesn't want to go back on that.

"But I'm gonna wrestle with it," Miller said.

Bet he won't have any second thoughts in March.