Of all the strange paparazzi pals who keep popping up in headlines together -- like Paris and Britney, linked for no good reason at all -- the strangest seem to be O.J. Simpson and the New York Knicks.

The bond was forged on that June night in 1994 when, in the middle of Game 5 of the NBA Finals, NBC went picture-in-picture showing the infamous Bronco chase alongside the Knicks and the Houston Rockets. Simpson even became a part of Pat Riley's postgame news conference when a fan with a beer-filled cup in his hand asked the Knicks coach, "If O.J. cuts left instead of right, do you think he makes it?" 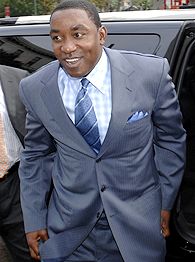 Now, 13 years later, they're together again, taking turns on the New York tabloid covers, the Knicks in the midst of a sexual harassment lawsuit filed by former vice president Anucha Browne Sanders while Simpson is accused of an attempted armed robbery in Las Vegas. But this time they aren't linked only by timing. The Knicks are in a bind specifically because of Simpson, and the segment of our society he created: Court Culture.

We didn't care nearly as much about jurisprudence before O.J. went to trial in 1995. There was nothing glamorous about the court system. Then the greatest show of the decade started. It didn't require a big-name director. No large production budget or marketing campaign. All it took was one single camera in a courtroom in downtown Los Angeles to make stars out of the late Johnnie Cochran (not to mention Phil Morris, the actor who played the Cochranesque Jackie Chiles on "Seinfeld"), Marcia Clark, Chris Darden, Lance Ito, Kato Kaelin and Faye Resnick.

It was a media career-maker, too. You see the aftereffects of the trial every time you see Roger Cossack, Greta Van Susteren or Jeffrey Toobin on TV.

That's the irony of Simpson's getting arrested because he's angry about people profiting off his "[stuff]." All he's doing is driving up ratings and creating more money for the real O.J. industry. He would have been better off taking his makeshift commando team to the cable TV networks instead of going after a bunch of sports memorabilia that, as Mark Kreidler wrote, won't sell anyway.

All the old names started popping up on television again. Detectives Mark Fuhrman and Tom Lange. Clark, looking very Hillary Clintonesque with her now-blond hair. And, of course, the inescapable Kato. Nothing else gets the cameras moving and the talking heads talking like O.J. Never mind that the deadlocked jury in the Phil Spector murder trial and the mockery of Jim Crow justice in the Jena 6 case are far more important stories. This is O.J. the job-creator.

But there's another legacy of the Court Culture that could come back on the Knicks. It's the importance of words. It wasn't just the tight gloves that turned around the Simpson criminal case. It was one word that Fuhrman denied ever came from his lips, a nasty epithet that another witness later testified that he did say. The n-word.

Fuhrman got caught in a lie, and the prosecution never recovered.

For all of the outrage over the verdict, it's pretty easy to see how the jury reached its conclusion: no murder weapon, no eyewitness (except for, possibly, an Akita dog), all sorts of procedural mistakes from a crime lab team that came off like Chief Wiggum and his staff, and the prosecution's main witness perjured himself on the stand. When the lead prosecutor herself called Fuhrman an example of the worst the LAPD had to offer, where did that leave her case? 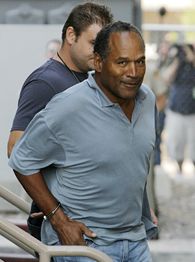 (For the record I think both verdicts were right. Given the way O.J.'s defense team ran circles around the prosecution, the jury almost had no choice. In the civil case, with a lower burden of proof and the judge keeping most of the anti-LAPD evidence out of the courtroom, it's not surprising Simpson lost.)

In the Knicks' case, the b-word has emerged as the central point. Browne Sanders said Isiah Thomas repeatedly referred to her as a "bitch." She said Knicks guard Stephon Marbury called her a "black bitch." (Marbury said he might have called her a bitch, but not a black bitch. Thanks for the clarification, Steph.) Thomas said he didn't direct that word at her.

Then there was the cavalier response of Madison Square Garden boss James Dolan when asked if it was appropriate to call work colleagues a bitch.

Ultimately the jury will have to determine whether Browne Sanders was the victim of a sexist work environment or if she is concocting claims to counter a just firing based on her work performance. But a central part of this he-said, she-said case will be whose side they take on the "bitch" issue. One person isn't telling the truth. One word probably will tip the balance of credibility.

We've been through this before. Sadly, it didn't even take too long for this trial to even acquire its own standard sentence -- you know, that succinct summary that can easily be cut and pasted into the story. For the past decade, just about every story about Simpson contained some version of this sentence: Simpson was acquitted of the murders in a criminal trial, but was later found liable for their deaths in a civil trial and ordered to pay $33.5 million to their families.

The phrase that keeps popping up in the Associated Press reports of the Sanders/Thomas trial reads: "The lawsuit has portrayed Madison Square Garden as more dysfunctional frat house than hallowed arena."

The damage is done to Thomas and the Knicks, regardless of the verdict. Just like O.J. never truly remained free even though a jury let him go home. He couldn't be O.J. Simpson anymore, no more movies, no more country club membership, no more cushy life in Brentwood.

Thomas has come off as a man of double racial standards, both in Sanders' testimony that he said "I don't give a f--- about these white [season-ticket holders]" and his own volunteered view that he thinks a white man calling a black woman a bitch is far more offensive than a black man doing the same. Dolan came off as smug and disdainful. As a lurid byproduct of the trial, we learned a star player allegedly had sex with a team intern in a truck and it's no big deal in the Garden.

The Knicks are getting their turn in court, with the defense's case under way, starting with a Garden executive who testified that Sanders was overwhelmed by her job and never complained about Thomas until Dec. 15, 2005, only a month before she was fired. A good day for them. Then again, they won the game on June 17, 1994, and that's not what people remember about that night.

Wednesday afternoon, as helicopters showed O.J. on the move again -- this time in a silver sedan -- the Knicks looked like the ones unable to escape.