Eight hours before I was to get on the phone with Charles Oakley, the former all-star, I already knew he followed appetizers with sea bass at Stack Restaurant & Bar at The Mirage in Las Vegas the night before. My well-placed source e-mailed me this "crucial" info the morning after.

That's right, the Vegas gossip mill -- the same mill that, earlier in the week, gave me the whereabouts of Michael Jordan, T-Mac, Drew Barrymore and Gabrielle Union -- also churns out Oak's name and dinner selection. It's the type of treatment reserved for rock stars, or NBA players with rock star reputations like Oakley's. 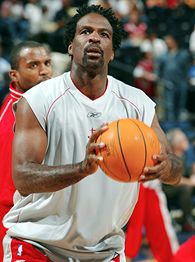 And now, Oakley is putting his rep on the line as, at the age of 43, he plans to resume a career that was defined by hustle, tenacious rebounding, aggressive defense and an assortment of on-court altercations.

Though he's just one of several former ballers hoping to lace 'em up again, it is his comeback attempt that appears to be the most improbable. Unlike Reggie Miller, Allan Houston, and Penny Hardaway -- guards who can safely hover around the perimeter -- the veteran big man will be tossed into the fray and asked to exact (or is it withstand?) punishment in the paint.

And unlike those other guys, Oakley won't be coming back on the cheap.

During our chat, Oakley explained why he wants to return to the game, which teams he's targeting, and what it'll cost them.

Alipour: How serious are you about a comeback?

Oakley: I'm serious. If somebody wants to come in and see me work out, (see) what condition I'm in, they'll see I can bring a lot to a team. I'm a veteran. I understand the game. I can control a game. I understand systems. I can play several positions.

In your final three seasons, you averaged roughly two rebounds and two points and shot about 40 percent from the field. And that was three years ago. How much production can you really bring to the table?

I can only do what they play me. If they give me two to three minutes, I'll give them two to three points and rebounds.

What type of condition are you in?

I'm in 85-90 percent condition for somebody who hasn't played in two to three years. I think right now, I'm in better shape than 90 percent of the guys who played last year. I'm in great shape. I can play 20-25 minutes a night. People say, "You're old." Old ain't nothing. You've got new cars that break down and old cars that pass them.

To say you're in better condition than 90 percent of the players is a bold statement. Describe your regimen.

My regimen has been the same my whole career. I never take time off. I work around the clock, every year. Even though I retired, I work out four to five days a week, run two to three miles, I play ball. My thing is, it's about the legs and endurance. When I get into training camp, I'll take my game to another level because I know what I got to do.

So, I know you had sea bass with MJ in Vegas last night. In other words, you've got quite a lifestyle. Why give that up? What's your motivation?

My lifestyle is going to be my lifestyle when I come back to the league. What I bring to the league, it will be special. I'm a trendsetter. I'm a leader, not a follower. My motivation is, you look at guys who play baseball, boxing, hockey -- guys play 25 years. In basketball, you can play 20-21 years. 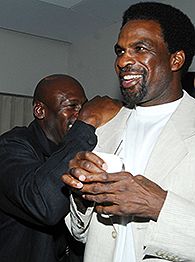 Your pal Jordan knows a thing or two about comebacks. What advice has he given you?

At least two years, $10 million. Nine or 10 million. I'm not coming back for a million and five. My value is worth more than that.

That's a lot of money, Oak. Is this comeback about money?

It's not about money. Money is a part of the comeback, but you can't buy me. It's something I'd be happy with, but I can get you more than what you paid for. I'll give you three-times your money.

You're often spotted in Vegas and it's well known that you like to gamble. Is your comeback attempt at all related to gambling?

Let's talk about some of the teams you've expressed interest in. You're one of the most beloved players to ever don a Knicks uniform. Why is New York a good fit for you now?

I can help the Knicks with leadership. With Eddy Curry and Stephon (Marbury), I can show them what it takes to be a winner. I know what it takes. In New York, I can get them in the mind-set, get them better and better. Every year (when I played) in Toronto, I made them better and better. It's not about me averaging 20 points and 10 rebounds. It's about leadership, on and off the court. It's about the little things now.

Being around for 20 years, I know the game is about mind-set. Like San Antonio, do the little things and be dedicated to your teammates. The problem with a lot of guys is they don't want to play in a system. If anybody gets fired, it's the coach. But players need to understand that, at the end of the day, do what the coach wants you to do.

You mentioned your friend Eddy Curry. How can you help him, specifically?

I played in Chicago with him. Eddy will listen to me. I worked with him after practice. I'll tell him this: "You got to get in shape, No. 1. You can't play basketball if you're not in shape. You're not in shape to do what you should for 82 games." He wasn't in shape all of last year. Ain't nobody telling him that. I'm not a friend. I'm going to speak my mind.

You have experience playing against Isiah Thomas. Can you play for Isiah? And have you spoken to him lately?

I don't know. I talked to Isiah about this a couple of years ago. I'm not saying Isiah will give me a deal. I might not be there, I might be somewhere else.

I'm also hearing that you're interested in playing for Miami. Any truth to the rumor?

I would go to Miami. I saw Pat (Riley) a couple of years ago and we talked. He wasn't the coach at the time. When he took the job over, I never really called him and said, "Give me a chance to come play with you." I'm open. The door is not closed. If Pat calls me and he knows the scenario, that would be (something to consider).

They already have veteran leadership. What do you bring to their table?

I can let Shaq know and let (Dwyane) Wade know that, "Hey, you're a superstar, an MVP, this and that, but last year was a so-so year." Basketball is about competing and understanding. I played with Wade about four years ago in Hoops, and he came to the hole, so I fouled him. He was a rookie, and I said, "Hey, this is what I do. Don't come here if you can't take this."

One of your more famous on-court altercations was with Shaq a few years ago. Have you mended fences?

I've seen him since. I can play with whoever. I'm going to be me. He's one of the toughest players in the game, but I've played with guys like that. He's a force, but you know, I can bring more leadership to him.

The Mavericks seem to be the only Western Conference team that you're interested in. Why them?

I can give Dirk (Nowitzki) a mind-set. It's about getting a mind-set in Dallas. A lot of (the Mavs') players are fundamental players who need the ball, can't play without the ball. They just need communication on the court.

You mentioned that you'd play for the Nets, but you also had some conflict with Vince Carter and his mom, back when you both played in Toronto and you criticized him for not stepping up (before Game 4 of the first round of the 2001 playoffs against the Knicks). How's your relationship with him?

It's good. We had no conflict. It was about communicating. In that case, he was young and just coming out of college. Some things were said. Other people blew it out of proportion. We never had no beef. People were like, "There's a feud between them." But there wasn't none of that.

How can you help the Nets?

In a lot of ways. Leadership and just, you know, bring respect. (And) my defensive skills. I can still move, jump, rebound, and use my abilities.

You also mentioned the Cavaliers. They certainly can use an inside presence and veteran leadership.

They need someone who understands, who controls defense. They're bad on defense. They don't have guys who get in position. They're just bad.

Any interest in returning to Chicago?

I was there before. I don't know if they're willing to look at me because they try to control young players. They don't like veterans who speak their mind. So that may not be a good situation.

When you say "they," who are you referring to, exactly?

Which team is the most realistic fit? Has anyone shown interest?

To be honest with you, I don't know right now. I'm just chilling. I'm enjoying my life. If they call me, good. If not, I'll go on with my life. I'm not pumping myself. I'm going to wait for them to call me. If not, I'm cool.

You're considered to be among the coolest, baddest players in recent history. It's a favorable reputation. Are you concerned at all that by performing poorly, you'll hurt that reputation? That you'll damage your legacy?

Sam Alipour is based in Los Angeles. His Media Blitz column appears in ESPN The Magazine and regularly on Page 2. You can reach him at sam.alipour@gmail.com.