Every now and then, an NBA player does something to remind us how thin the line is between those who get paid to play and those ballin' at the park or Y. Stephen Jackson provided just such a moment upon being asked about a pending six-year, $44 million sign-and-trade deal that has him headed from Atlanta to Indiana. 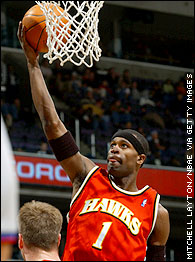 "I even got a phone call from Larry Bird," he said in hushed awe.

Bird being the Pacers' president, that would seem to be a matter of course for a player about to join the franchise. But Jackson sounded as thrilled about Larry Legend dialing his cell phone as being assured the lifelong financial security that he thought he'd thrown away when he turned down a three-year, $9 million offer from the Spurs last summer. He did that, as it turns out, because he knew the Pacers were trying to get him then and remained confident they would, eventually. When they didn't -- or couldn't, once the Spurs worked a three-way deal that landed them Hedo Turkoglu and Ron Mercer -- he was forced to settle for a two-year, $2.1 million deal from the Hawks.

To the average guy, of course, that still made him a millionaire. But that easily could've been the last NBA contract Jackson ever saw, which meant, for a guy without a college degree and no other distinguishable trade, it could've been coin that would have to serve as a lifetime nut.

"I was worried that I'd made a mistake," Jackson says. "I was definitely shook. That was another situation where I had my back to the wall."

Both Jackson and his agent, Dan Fegan, were ridiculed far and wide for passing on a chance to continue playing with Tim Duncan and having to scrounge for a deal from the Hawks. More than a few critics insisted that Jackson should fire Fegan. But Jackson stood by him and used the year to work on his game, hoping he'd have reason to opt out of his second year with the Hawks. After the 6-foot-8 guard set career marks in every category -- including his first positive assist/turnover ratio and an 18-point scoring average -- the Pacers gave him a reason.

Fegan, who declined to be interviewed, has a history of getting clients to take short deals in one place and parlaying them into big-money contracts elsewhere. Count Chris Dudley, Shandon Anderson and Howard Eisley among them. The moves haven't always worked out on the court, but Fegan has put Jackson in prime position to succeed on every front. Not only did he get him a deal that makes the Spurs' offer look paltry, but he reunited him with former San Antonio assistant coach Mike Brown, who played a prominent role in Jackson's emergence with the Spurs. He also goes from one of the league's most miserable teams to one of its mightiest, and one that desperately needs his clutch 3-point stroke.

In short, the decision that drew Fegan the most criticism a year ago actually may turn out to be one of his best.

"I can't explain how good this feels," Jackson said. "Mike Brown is a guy I definitely respect."

This hairpin turn of fortune is the latest in a lifetime of them for Jackson. He was on his way to being part of the Mike Bibby NCAA-title-winning recruiting class at Arizona but couldn't score high enough on the SAT to qualify for admission. He stuck around Phoenix, and his pickup play caught the Suns' eye, prompting them to draft him with the 43rd pick in 1997, but he was cut in training camp. That led to a tour through the basketball world's netherworld -- training-camp cuts by the Bulls and Grizzlies, two stints in the CBA, teams in the Dominican Republic and Venezuela -- before the 2000 Nets gave him a shot. He celebrated the fact that he had finally reached the NBA every chance he got, and it eventually caught up to him.

"I enjoyed it too much," he says. "I came into the NBA not looking at it as a job but the same way I did when I was playing at the Y. I was just getting a paid a lot of money to do it, that's all."