Low-balling the incoming NBA draft class seems to be part of the GM offseason curriculum these days. It goes something like this: One, scout the talent. Two, prevaricate about the talent that interests you. Three, downgrade the impact the talent will have anytime soon.

It's not a tough sell, what with the multitude of teenage and foreign players being drafted. Only last year's pronouncement that Carmelo Anthony and LeBron James would be the only additions of note certainly didn't prove true. Dwyane Wade, Chris Bosh, Marquis Daniels, Josh Howard, Kirk Hinrich and Leandro Barbosa not only played more significant roles than expected, half did so for playoff teams, the NBA gold standard. It remains to be seen how last year's class fares over the long haul, but its start is no less promising than any of its predecessors.

And don't be surprised if this year's class surpasses the modest advertising by front-office types as well.

(As a side note, the dilemma facing GMs is not that there's less talent, but that more players are making the daunting leap from playing against boys to going against men, increasing the hit-or-miss odds. The younger a player is, the less clear it is how his love for the game or work ethic will be affected by suddenly being a millionaire. Or by the personality of his coach. Or by living far away from friends and family. Or by having to earn his minutes playing 'D' when he's been a scorer his entire career.)

(Side note II: It used to be that foreign players were already tested to some degree on all those counts, which is how they became more attractive than U.S. players weaned on AAU or watered-down college ball. But that's not the case now. Darko Milicic, Maciej Lampe and Pavel Podkolzin are all examples of players who hadn't proved anything in Europe yet were unfairly hyped, based on physique and skill drills, into something they're not. Hey, Yinka Dare was a freakin' Adonis and I'm guessing Steve Alford or Damon Bailey were spectacular in skill drills. Touting a player based on his physical attributes or his jump-shot form is like picking a wife based on her bra size or her cherry pie recipe. Too little substance, too much imagination.) 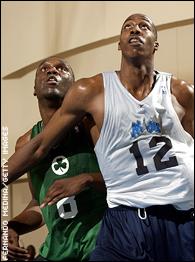 So here's what I know: After seeing seven of this year's 13 lottery picks and 18 of 29 first-rounders get their first taste of pro-caliber summer-league ball in Las Vegas, Long Beach and Salt Lake City, the overall talent level coming in looks to be no less than last year's crop. It's a little early to say definitively who is going to flourish and who will founder, but the performances of the last month at least offer a starting point. More so, anyway, than some 19-year-old's wing span or behind-the-back dribble in an empty gym. (If a player isn't mentioned, it's either because I didn't see him or he didn't do anything good or bad enough to warrant mention.)

Atlanta Hawks. Now maybe it's clear why No. 6 pick Josh Childress insists he's a 2, not a 3 -- because he's not likely to beat out high schooler Josh Smith (17th pick) at small forward, at least not based on their performances in Salt Lake City. Smith has the athleticism to have an impact without the ball, while Childress was frighteningly mediocre despite being the Hawks' primary summer-league go-to guy. Childress didn't have the lift to get his shot off inside and his funky stroke, as is, limits his range. At the other end, Derrick Dial got every look he wanted against him. It's only summer league, but still ...

Boston Celtics. Second-year point guard Marcus Banks was the drawing card as a UNLV alumnus for the first (but not last) summer league held in Vegas, but it was No. 15 pick Al Jefferson and Tony Allen (25th) who showed they could slide right into the Celtics' rotation, particularly if Boston parrots Memphis' up-tempo platoon system, the same approach first-year coach Doc Rivers used to win his 2000 Coach of the Year award in Orlando. Jefferson's midrange jumper is surprisingly accurate for a 6-foot-10 high schooler and the offense flowed far better with Allen than Banks. Boxing out remains a foreign concept to Jefferson and he looks lost in half-court sets, but his rebounding and ability to run the floor will earn him minutes.

Chicago Bulls. GM John Paxson clearly is building a team in his image. While the young Bulls aren't going to overwhelm you with their physical gifts, don't underestimate their tenacity and simple understanding of the game. Ben Gordon (third pick) showed shades of Wade in Salt Lake City as an attacking guard, Luol Deng (No. 7) was deadly from 15 to 20 feet and second-round pick Chris Duhon has the look of another Howard Eisley as an undersized point guard who nevertheless gets the ball where it's supposed to go and knocks down the open shot when he has it. Even Mario Austin, despite being nearly as unorthodox in the post as Othella Harrington, impressed with his aggressiveness, diving headfirst into a baseline folding table in pursuit of a loose ball. It's no accident the Bulls finished 6-1 in the Rocky Mountain Revue.

Dallas Mavericks. He played long stretches with Daniels and Howard in Salt Lake City and meshed well. He tortured Dan Dickau in a win over the Blazers and had the size to post up Sebastian Telfair. Podkolzin, meanwhile, looked like a man standing on an Autobahn median -- helpless and trapped by the speed of the activity around him.

Los Angeles Lakers. Kobe Bryant and 27th pick Sasha Vujacic are either going to be bumping chests or butting heads. Vujacic ran the offense and gave second-round pick Marcus Douthit an earful when he looked him off on a broken play, resulting in a turnover. He can back up the bark, though -- Vujacic dug in defensively, has a smooth stroke, unlimited range and brought the ball up against fullcourt pressure with no problem, impressive for someone 6-7.

Orlando Magic. Jameer Nelson has range out to the 3-point arc and clearly can run an offense, but he has tunnel vision as a passer. Once he decided on his target, whether in transition or in a halfcourt set, that's where he was going, oblivious to other options. That could be big trouble. For now, it explains why Telfair and Harris both went ahead of him.

Portland Trail Blazers. Telfair showed both why Portland made him a lottery pick and why many teams felt that was overspending for a 5-10 high school point guard. His quickness, vision and jumper off the dribble are clearly good enough to be effective in the NBA but when he tires -- as he assuredly will in back-to-backs and four-games-in-five-night stretches -- he struggles. He'll have to find a way to offset that as Tony Parker has. For now, he could set an ESPN single-season record for combined highlight and lowlight appearances, which may explain why adidas is paying him all that scratch. (No such thing as bad pub.) 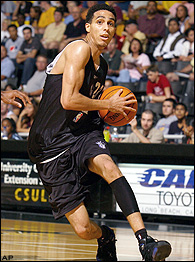 Sacramento Kings. Light-skinned and wiry, Kevin Martin bears a faint resemblance to Doug Christie and falls into the just-knows-how-to-play category. His specialty at Long Beach was making back-to-back plays at opposite ends of the floor -- stealing a pass or grabbing a rebound and then making the key pass or shot in transition. He's super quick, has a solid mid-range jumper and is fearless going to the rim. There also has to be a place in the NBA for former USC star David Bluthenthal, who played for Euro champion Maccabi Tel Aviv. Bluthenthal was deadly from 3-point range but strong enough in the post to check Clippers power forward Chris Wilcox.

San Antonio Spurs. They appear to have found another late first-round point guard in Slovenian Beno Udrih. Despite having Devin Brown on the floor, fresh off his impressive showing in the Spurs' second-round loss to the Lakers, it was Udrih who had the ball in his hands for the last two possessions of a 61-60 win over the Nuggets. It was clear why as the Spurs scored both times.

Seattle SuperSonics. Blazers second-year forward Travis Outlaw, ball cocked over his head and a murderous dunk in mind, soared to the rim. Sonics high school center Robert Swift (No. 12) met him there and cleanly blocked the ball before it left Outlaw's hand. Just as impressively, Swift reacted as if it was no big deal. Maybe that's because he did it last summer in a private game to Paul Pierce, one reason why the Celtics didn't need to see Swift work out to know they wanted him. Big men always develop slowly and Seattle would be wise to sign some vets who could show him the ropes, but Swift's appetite for defense and back-to-the-basket instincts should carry him a long way.

Utah Jazz. Kirk Snyder blocked Nuggets guard Miles Simon's way (yes, that Miles Simon) without saying a word and refused to move, the kind of silent scorn Karl Malone inflicted countless times on an opponent -- and the kind of attitude essential to playing for coach Jerry Sloan. Snyder led the Jazz's summer-league team in scoring (13.4) despite shooting 35 percent, but he did all the little things -- get to the free-throw line, run the floor hard, foul before conceding a layup -- that have long made Utah greater than the sum of its parts. Former Syracuse star Kueth Duany showed the same temperament and should have a chance to make the squad as well.

Ric Bucher covers the NBA for ESPN The Magazine and collaborated with Rockets center Yao Ming on "Yao: A Life In Two Worlds," published by Miramax and available in bookstores beginning Sept. 29. Click here to send him a question for possible use on ESPNEWS.