Kobe Bryant has held fast to his radio -- and TV, blog, dot-com, newspaper, magazine, semaphore -- silence concerning his future with the Lakers. That's good, since speaking out didn't exactly motivate the Lakers nor endear him to the how-dare-an-NBA-player-complain crowd.

The Lakers, meanwhile, have been silent, too. That's not so good, since it's their inability to make any significant moves that prompted Kobe to ask out in the first place.

Just understand this, in lieu of Bryant telling you himself: If he was boiling about the Lakers for not jumping at the chance to get Jason Kidd at the trade deadline, he's now at the stage where the water has evaporated and the bone-dry pot is scorched and rattling, after having a firsthand taste of what playing with Kidd is like at the Team USA minicamp last month. 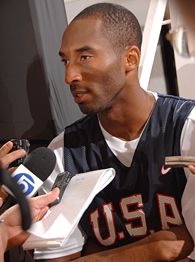 Kidd, by several accounts, was an absolute wonder during the three-day training session in Las Vegas and equally thrilled about playing with Bryant.

"No question," said someone close to Bryant, "his frustration was made worse by Vegas."

For those who have been too busy trying to get Pluto reinstated as a planet to stay up with current events, Bryant let it be known back in late May that he had lost faith in the Lakers' ability to build a championship team, and while he was not demanding a trade, if the organization didn't bring back title-winning architect Jerry West, the Lakers might as well send him elsewhere.

When that was boiled down to a less nuanced version, as in "Kobe wants to be traded unless West returns," Bryant tried to set the record straight, emphasizing his love for the Lakers' legacy and how he didn't want to leave. Which led to another incomplete translation, as in, "Kobe says he doesn't want to leave the Lakers."

In the meantime, a Lakers insider was quoted as saying that Bryant was behind the departure of Shaquille O'Neal. Anyone close to the situation always knew different, so Bryant felt he was taking one for Dr. Jerry Buss -- the driving force behind sending O'Neal to Miami -- by never challenging the misconception.

A conversation with coach Phil Jackson prompted Kobe to soften his tone -- if not his stance -- one more time before he finally gave up on trying to explain his feelings and unplugged from the media grid.

Since then, the Lakers have maintained the status quo by re-signing Luke Walton and Chris Mihm. (It'll be nice to see Derek Fisher back in a Lakers' uniform, but let's not kid ourselves that this changes what they essentially are.) According to sources, they've also declined an offer of Ron Artest for Lamar Odom, dangled Kwame Brown, Brian Cook and Andrew Bynum for Jermaine O'Neal but said no to the Pacers' offer of O'Neal for Odom and Bynum.

This, by the way, being the same Bynum they steadfastly refused to part with for Kidd in February.

Now, with the Kevin Garnett pipedream officially over and Bryant quietly going about his business, the focus reverts back to the Lakers. They know their star is unhappy, they've admitted their team isn't good enough to contend and they've promised to change all that. Bryant said he wished he'd handled his series of declarations earlier this summer differently, but as the summer days slip by with no news out of El Segundo, I have to think more and more people will empathize with his desire to be elsewhere.

He really doesn't have to say anything more. The Lakers are making his case for him.

Ric Bucher covers the NBA for ESPN The Magazine.