Later that night, the NBA rookie would take the floor against Portland in the 52nd game of his NBA career, his last contest before the All-Star break. But for now, all the league's fastest rising star wanted to do was relax. And find out why his girlfriend didn't get her Valentine's Day flowers. That's when older brother C.J. broke in. 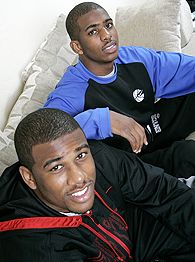 "You wanna do this thing tomorrow?" C.J. asked.

"What thing?" Chris asked back.

"This hospital visit in Houston, with the NBA, for All-Star weekend," C.J. explained.

"What else we got going tomorrow?" Chris replied.

"It's not about tomorrow," C.J. said. "It's the rest of the weekend that I worry about."

The conversation stopped there. The decision would be made later. But the message was as clear as an NBA backboard: In the Paul family, big brother is keeping a close eye on little brother's back. And that's a good thing. For the more Chris Paul steps on an NBA floor, the more people want a piece of him.

That's because here, in the heart of Bob Stoops Country, a 20-year-old from Tobacco Road has made NBA basketball a state-stopping event, averaging 15.9 points per game while leading his team in assists (7.7 per game), steals (2.2) and posters on bedroom walls. A Hornets team that won just 18 games a year ago without Paul is 28-23 at the break this year with him.

"He was born with a special gift," says teammate and 14-year NBA veteran P.J. Brown. "He's had that from the start. But then you take his maturity, his humility, how hard he works. They don't make many rookies like him in this league anymore. He's a rarity."

That's Brown's explanation for how an NBA freshman, living away from home for the first time in his life, has become a catalyst for the league's feel-good story of the first half. That's how Brown figures a kid who can't get into a club in Oklahoma City's famed Bricktown district has become the team leader.

Others echo Brown. Coach Byron Scott says its Paul's maturity. Guard Speedy Claxton says it's his humility. And Octagon agent Lance Young says it's a competitive fire unlike any other he's seen.

But Paul himself isn't quite so sure. Though all those things have played a part, as has his school-first, sports-second, Bible-backed upbringing in Winston-Salem, N.C., Paul's explanation for his seamless transition to life in the NBA centers around what he calls "the perfect blueprint for success."

It starts with getting drafted by an egoless team desperately in search of a star. Then playing for a head coach who "has his players' back." Having veteran teammates like Brown and Speedy Claxton, who are eager to teach Paul how the league works without fearing what his success could mean to them. Playing in a town like Oklahoma City that's similar to where you grew up, but far enough away that there aren't any distractions.

And most important, in his case, it means bringing along your big brother for the ride, so you've got someone you can trust, someone to hang out with and someone to keep you in line.

"I couldn't have drawn it up any better if I tried myself," Chris said. "Everything came together just right to make this happen."

Perhaps that was never more evident than Tuesday night, when Paul chilled with Portland rookie and former ACC counterpart Jarrett Jack. The two NBA infants swapped stories about the first four months of their professional lives, discussing everything from the right way to address a referee ("Don't ever call him Mr. Ref," Jack explained) to Kobe's brilliance ("I remember when he had 19 in the first quarter on us and I was like, 'Speedy, we gotta do something. He's on pace for 76,'" Paul said.). In between, they ogled a pair of pink, purple and green pastel Nike Air Force Ones in Paul's living room while watching Duke hammer Wake Forest, Paul's alma mater.

But when it came time to talk about their lives in the league, things couldn't have been more different. While Paul lives in Oklahoma City with his brother, Jack lives in Portland by himself. "And it's lonely," he said. "You get so bored you can't stand it."

While Paul has become not only the featured guard but also the featured player on his team, Jack is fighting for playing time with three other guards, Steve Blake, Juan Dixon and Sebastian Telfair. While Jack, who played at Georgia Tech, is a cross-country flight away from home, Paul is only a couple of hours from North Carolina.

"When you stop to think about it," Chris says. "A lot of it is luck. It's just the way it worked out. I was blessed."

It starts with C.J., a man Chris couldn't live with growing up but now can't live without. In his big brother, who just turned 22 this week, Chris has not only a roommate, but a best friend, a manager and someone watching out for him.

Working alongside Chris' agent, whom C.J. is constantly on the phone with, he has his hands on just about every aspect of his brother's off-court basketball life. That means autograph sessions, appearances, ticket requests, interviews. Everything.

"Without him, I'd be stressed out all the time," Chris said. "Do this, do that, go here, go there. Now, all I worry about is winning the game every single time I step on the court. He takes care of the rest of this stuff."

It was an idea suggested to the Paul brothers by LeBron James, whom Paul first met at the 2003 McDonald's All-American game. When the two friends attended a Jay-Z concert in the fall of 2004, shortly after LeBron entered the league, he gave Chris an early tip on life in the league.

"I didn't know when I was going pro," Chris said. "But LeBron basically told me, 'When you go, you're going to need a manager. And who better than someone you trust? Who better than C.J.?'"

No one. When C.J. graduated from USC-Spartanburg last spring, Chris bought him a chain that read, "Brothers 4 Life." His presence not only helps Chris relax in Oklahoma City, but it helps their mother Robin sleep better back in North Carolina.

"There's times when C.J. comes home [to North Carolina] and Chris is out there by himself, and I'm like, 'C.J., when are you going back?'" Robin said. "Chris just doesn't like being alone. He hates being by himself."

There was a time, not long ago, when he hated being with his brother. From the age of about 3, when Chris' father put a Fisher-Price hoop in the basement and taped a free-throw line to the concrete floor, they fought about everything from fouls on the basketball court to who was going to sit in the front seat on the way to school to why Chris always beat C.J. in video games.

"No," Chris said. "It ain't cheating when Peter Warrick returns the kickoff for a touchdown. That's called not tackling."

But in 2001, when C.J. left for Hampton University, where he played for a year before transferring to Spartanburg, everything changed. Chris suddenly had nobody's buttons to push, nobody to compete with.

"Chris really missed him -- a lot," said Charles Paul, his father. "I played a lot more with him, but it wasn't the same. And I wouldn't play no video games."

Said Chris: "Video games by yourself, against the computer, they aren't nearly the same. And one-on-one becomes just one. It was a classic 'don't know what you've got until it's gone.'"

Now they're again living under the same roof. Their home, a modest ranch on this city's northern tip, is what you'd expect from a pair of guys in their first postcollege residence. Makeshift furniture that doesn't really match. An office with no desk. A bottle of Fantastik cleaner on the back of the toilet.

The scent of NBA pretentiousness is nowhere to be found. During their free time, between yapping on their cell phones and pounding on their Blackberrys, Chris and C.J. watch TV ("lots of TV," says C.J.), go to the movies, bowl and eat.

All the while, C.J. tries to keep a close eye on his kid brother's schedule. Up next on the agenda? The NBA All-Star weekend, Paul's unofficial coming-out party. Wednesday morning, C.J. was putting the final touches on a weekend itinerary that included about 30 different appearances, events and parties over a three-day stretch.

"And the thing is, I want him to rest as much as possible this weekend," C.J. said. "He's still got 30 more games to play. We want to go to the playoffs."

So it should be no surprise that after Wednesday night's victory over the Trailblazers, a game in which Paul played just 22 minutes after aggravating a shoulder injury, that a Hornets team official had one simple question for the rookie about All-Star weekend.

"Your brother going down there with you?" he asked.