We're talking Phil Jackson and logic, so already things are off to a bad start.

But think about it.

Jackson may need a new home. The New Jersey Nets may want a new coach. Do the math.

Even if new has nothing to do with it. Jackson used to play for the Nets, used to be an assistant coach for the Nets and used to be a television analyst for the Nets. It's part of the appeal. Around the Meadowlands, it's more than part.

If it is strange to think about shifting the coaching carousel back to 78 rpm as we head into the fourth quarter of the regular season, let alone however many weeks the playoffs go for two teams that have the potential to track the postseason in months rather than weeks, that's nothing compared to how much it makes sense. Even with the Nets 16-3 since players rolled the red carpet for new coach Lawrence Frank and even with the Lakers needing Jackson, a free agent-to-be, more than he needs them. Neither should be going anywhere at the moment.

There is the credibility factor.

Jackson is about the only coach the Nets could hire and not get pilloried if Frank does well through the playoffs. In a league where pink slips come after 50 wins and division titles -- and New Jersey has already turned the Atlantic into a runaway -- that still means something. It would mean even more inside the locker room.

Jackson is a closer. He doesn't do building jobs, and the Nets, after consecutive Eastern Conference crowns and one credible Finals showing, are well past the middle steps in the ladder. They have a superstar; he does superstars. Phil, Jason. Jason, Phil.

There is the popularity factor.

The Wizards and SuperSonics are averaging more fans than the two-time defending East champions and the Bulls and Suns -- and Knicks -- are lapping them in home attendance. Only everything is wrong with this picture. Not only good, the Nets push the ball on offense, albeit this season without the usual success, and defend at an elite level and crash the defensive boards. They have Jason Kidd, Kenyon Martin and Richard Jefferson.

What they don't have is buzz. New Jersey, at 38-23, is on pace to finish 26th in attendance. First-graders with finger paint draw better.

People don't buy tickets to watch coaches, but a Jackson arrival would generate an excitement that unfortunately does not exist. Even better, that it comes with the Nets trying just to hold steady in fan support inside Continental Airlines Arena, undersupported even before they became lame ducks plotting a move. And even better, in this case, that the proposed jump is across the river.

Because there is the location factor.

Jackson is perfect for New York. If the Nets ever make it to Brooklyn, as the new ownership group hopes, he can tweak the Knicks, just like the days of the Chicago-New York playoff showdowns, and he can do the Apple again, just like when he played for the Knicks. There wouldn't be enough newsprint to follow his every move.

Jackson is a Montana guy in the offseason, but he's entirely big city for hoops. Chicago. Los Angeles. New York. If the Nets get to Brooklyn, it will need to be with the momentum to sell luxury suites. The same level of apathy in the new digs, whether because Formerly New Jersey was no longer good enough or because New Yorkers can't bring themselves to embrace the Nets, would be the subject of ridicule. Or the New Orleans Hornets.

None of this is fair to Frank, of course. Except that the Nets obviously, and understandably, like the idea of keeping their options open for the offseason, just in case, ya know, someone becomes available. The only statement so far is that he will remain interim coach until the summer, a practical approach by a seasoned personnel boss, Rod Thorn, who understands that jobs aren't earned in the weeks after the All-Star break. Other teams, maybe. But the success or failure of New Jersey's season will be measured in April, May and, they hope, June.

There is no reason to rush to embrace Frank, just as there is no point in him getting caught up in the moment. The positive reviews from his early days as a head coach will only make him marketable down the line if he doesn't stick in New Jersey. He wouldn't be the first to lose out because there's a bigger name on the other line. Of course, a great postseason showing gives him the chance to invalidate the entire discussion, making Frank one of the few to beat Jackson in the clutch.

Also to be determined is whether he would want to leave Los Angeles in the first place. He is tracking possible openings, though. That much is certain. Figure Jackson knows that an early playoff exit by the Mavericks would spark speculation anew about the future of the Don Nelson-Mark Cuban coupling.

So what that Jackson and Cuban have had their moments. Jackson and the Lakers haven't always been of like mind either. Even he was blindsided when the team announced last month that negotiations on a contract extension were off, citing the desire to not create any more distractions during the season.

Yeah, that'll do it. 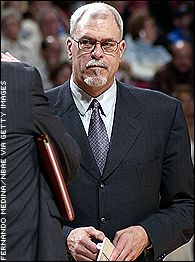 If anything, L.A. created another, one that Jackson was willing to allow to quietly smolder after talks had broken off a week earlier. Instead, there are more headlines, along with the promise that the topic will be revisited in the offseason and the understanding all along that they aren't kicking him out and he isn't running for the door. He may not leave at all.

Not that he wasn't going to have his fun at the Lakers' expense. Taking about 11 seconds to seize control and put pressure back on management, perhaps as payback for outing his demands for a raise from the $6 million annually, he said starting over is one of his favorite things. Touché.

This being the Lakers, there's been a couple dozen matters in the weeks that followed, moving the headlines away from the future of Jackson, the coach with the credibility to live the cyclone of 2003-04 and keep everything from falling apart. If you think they have seen the worst nightmares so far, imagine life without the steady hand on the sideline. Or, imagine him somewhere else next season.

Scott Howard-Cooper, who covers the NBA for the Sacramento Bee, is a regular contributor to ESPN.com.