Does anybody like Kobe Bryant? What ever happened to that sweet kid we all
thought we'd grow up and love?

It seems that at one point or another virtually every day, Kid Kobe finds
himself fighting some rather public battle -- which makes me wonder how many he
is fighting that aren't made public -- and now between his spat with Karl
Malone and his upcoming slugfest/showdown/Christmas Day massacre with Shaquille
O'Neal, Kobe found himself in this petulant tete-a-tete with Seattle SuperSonics
star Ray Allen, which was the focal point of Seattle's 108-93 victory over the Lakers on Tuesday night.

(For the record, Kobe got his Tuesday night, scoring 35 points to Allen's 26. But, in case you haven't been following this particular rift, it all started on
Oct. 12, in a preseason game at The Pond in Anaheim.)

From the outset, the feeling about and from Kobe was different. He was hyped.

He had his freedom, for one thing, and he knew the world was watching to see
how the Lakers would fare without that big lug who now resides in the rather
opalescent housing development of Star Island.

Kobe was playing on an altogether different plane than everybody else,
certainly for an otherwise meaningless preseason game. He scored 15 of his team's
first 20 points in the first quarter and went on to total 35.

At one point in the second half, Allen stripped Kobe and went in to shoot a layup.
Kobe caught up to him and spike-blocked his shot, knocking Allen to the floor
with the force of the play, then stood over Allen and glared. No matter that
Rashard Lewis had gathered up the loose ball and was dunking it at the time,
Kobe was making a point.

Allen did not speak that night, but the next night, in Portland, he was asked
about Kobe. He said plenty.

"He feels like he needs to show the league and the people in this country
that he is better without Shaq, that he can win without Shaq," Allen said. "That
he can still average 30 points and he can still carry the load on this team.

The point production is not so much what people will look at because (Tracy)
McGrady did it in Orlando and Allen (Iverson) did it in Philly. But can you win
championships? I think that is special. Can he make everybody better?

"He has the talent. But is his attitude going to sometimes allow him to take
the backseat and let Lamar Odom shine and let Caron Butler have his nights and
bring those big guys (Chris Mihm and Slava Medvedenko) along?"

Allen predicted that the Lakers would not be nearly as successful with their
current roster and that that would eventually make Bryant frustrated.

"If Kobe doesn't see that he needs two and a half good players on this team
to be a legitimate playoff contender and maybe win a championship, in about a
year or two he will be calling out to (Lakers owner) Jerry Buss that we need
some help in here, or trade me. We'll all be saying we told you so when he says
that."

"I think he talks because he feels like he has to talk," Allen said. "He's
out there playing, and if he does something good he feels like he needs to pat
himself on the back. Because to me it seems like he is isolated out there. As
much as it's five-on-five, I don't see much camaraderie going on out there with
his teammates."

Allen said at the end of the game, when a Sonics comeback victory was nearly
decided, Bryant remained intent upon proving how good he was. When Antonio
Daniels told 6-foot-8, 250-pound power forward Reggie Evans to get out on Bryant
defensively, Allen said Bryant began to say how he was now 230 pounds and how
he could take Evans.

"I was like, 'Well go ahead and take him then,'" Allen said. "He's fighting
all these battles that he doesn't need to fight, meanwhile his team is losing
the war."

The next day, Kobe shrugged off Allen's comments. At the time he
was fighting off the words Phil Jackson had written in his soon-to-be-released
book. Kobe did say he called Allen's cell phone and left a message,
but Allen said he did not get the message because he had changed cell phone
numbers.

But 10 days later, on the eve of the Lakers' and Sonics' second preseason
game, Riverside Press Enterprise reporter Brad Turner encountered Kobe in the
Lakers locker room. Turner said Kobe was completely amiable when he walked in,
looking over and saying, "What's up, BT?"

"Don't even put me and that dude in the same breath," Kobe barked.

The next night, at the San Diego Arena, Allen begged out of the game because
of a sore lower back (more on that below), taking the air out of what was the
anticipated matchup.

Still, during the game, when Kobe found himself in front of the Sonics' bench
during a dead ball, he walked over to Allen and sneered, "I'll see you
again." Bryant then said something that was indecipherable, ending it with "talking
all that (trash)."

Jerome James stood up for Allen, telling Bryant to "go (expletive) yourself,"
which prompted Lamar Odom to say to James, "He started it though. You know he
started it."

After the game, Allen told reporters: "It was funny. But it's a dead issue to
me. It was funny. I'll leave it at that."

Fast forward to this week, and Allen addressed the situation again Sunday
night, placing the blame on Kobe.

"I don't know him and I don't have anything negative to say about him," Allen
said. "His situation is his situation. That was my opinion. If you asked me
my opinion about anybody else in the league ... I feel like I have an opinion
on it.

"I think he made it more than what it was by trying to go back and tell
people what he said and what he did. All he had to do was get into contact with me
and we could have hashed it out like two men as opposed to throwing it on the
airwaves like that."

Allen did not mention that Kobe said he had tried to call his cell phone but
that Allen's cell phone number had been changed.

In any case, Allen also said on Sunday he was not surprised that Kobe had
approached him in San Diego during the game.

"I wasn't surprised (he approached me)," Allen said. "When it comes down to
the egos in this league, you don't know what to expect. You have to just keep
up your guard and make sure you protect yourself out on that floor. Because
guys try to take cheap shots."

That's the background. Now, my personal opinion is that Allen orchestrated this entire thing, and that
Kobe, because of his personality and his inability to let things go, is an
unwitting pawn in Allen's master scheme.

In case you haven't followed Allen's situation, he is in the midst of the
final year on his contract, and his negotiations with the Sonics for an extension
have been bogged down since August. Essentially, Allen wants a max contract
of $100 million and the Sonics are offering $70 million, in large part because
Allen is 29 years old with a history of ankle problems.

A source told me that Allen is asking for $100 million because he compares
himself to Bryant and Bryant's new $136 million contract. Allen's reasoning,
according to the source, is that he may not be as good as Kobe, but he is not $36
million worse, and certainly not $66 million worse.

My theory -- which Allen laughs off and denies, understandably -- is that
Allen said what he said about Bryant back in mid-October to get into Bryant's
head so that when the teams played in the regular season, Bryant's considerable
ego would turn it into a one-on-one game while Allen would play a team game.

And if the Sonics were able to beat the Lakers even half the time, Allen
could then turn to the Sonics during contract negotiations and point out his
virtues against a $136 million player. 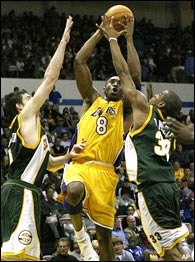 You think I'm nuts? Let's go back to that Oct. 25 preseason game, the one
where Allen mysteriously sat out with a sore lower back, which would have been
the first time the two played since Allen's initial comments.

I think Allen didn't want to waste the foundation for what he had laid on a
meaningless preseason game. He wants this rivalry out there, front and center.
Allen missed the game with a sore lower back, right? However, a source at
Torrey Pines Golf Course in San Diego told me that Allen had played golf, one of
his passions, at the course during that trip. I do believe there is some use
of the lower back in a golf swing.

Moreover, Allen magically healed for the team's final preseason game, a 91-87
victory over Portland in which Allen scored 32 points in 42 minutes,
including 10 straight in the final minutes to win the game.

There's nothing wrong with Allen missing that game, or the one after it.
Veterans miss preseason games all the time. It's a part of the league. But I think
Allen came up with the sore lower back excuse so it would not look so
blatantly like he was ducking Bryant.

Since those preseason games, we haven't heard word one about a sore lower
back as Allen has played at an MVP level in leading the Sonics to one of the best
records in the league.

When Bryant approached Allen in that game in San Diego and told him, "I'll
see you again," Allen had to be laughing inside. He was Geppetto and Bryant, the
puppet, came dancing over, as if on cue.

And, as expected, he couldn't Tuesday night.

Frank Hughes, who covers the NBA for the Tacoma (Wash.) News-Tribune, is a regular contributor to ESPN.com.