Though it seems like two decades ago now, I remember Howard Schultz five years ago, the day he purchased the Seattle SuperSonics from Barry Ackerley.

He was a different man then, happy, vivacious and endlessly optimistic as he proudly towed around his younger brother, who was there to appreciate what a poor kid from the Brooklyn projects could accomplish. He spoke eloquently of his new acquisition as a public trust and fantasized about changing the culture of a league that presents a wide chasm between its players and its fans.

On Tuesday, when Schultz sold the Sonics to an investment group from Oklahoma City, for all intents and purposes ending the legacy of the city's first professional sports franchise, he could not have been further from that energetic dreamer whose power of persuasion makes you actually believe he can achieve the impossible.

He had become angry, bitter and maddeningly defiant, like a petulant child who decided to take his toy and go home. Only, in this case, he quite obviously threw his toy down a drainage ditch and stalked home while boldly misrepresenting the truth, telling everybody they could still play with the toy.

There is a scene in the movie "The Talented Mr. Ripley" in which the characters of Matt Damon and Gwyneth Paltrow sit on a sailboat in the Mediterranean Sea and analyze why their relationships with Jude Law's character had changed so dramatically.

Paltrow explains that Law's character is the kind of person who can focus his attention solely on you, make you feel as if you are the center of the universe and nothing could be more important to him. And then he gets bored, the attention goes away and the person feels empty, vacant and confused, wondering what he or she did wrong to elicit such treatment.

That, in a nutshell, is Howard Schultz, an entrepreneur whose romantic attention was focused exclusively on his basketball team for about a year. Then things didn't quite go the way he envisioned, he got bored and discouraged, and he decided that he wanted out (regardless of the impact on people's lives).

How and why he became frustrated and changed irrevocably was not one thing, but a series of events that soured him on the NBA product.

It started with Gary Payton, for whom Schultz felt an immediate disdain. Schultz thought Payton was selfish and self-absorbed and that the people with whom he surrounded himself were unethical. When Payton failed to show up on the first day of training camp in 2002 to make a point, it sealed his fate: Schultz was going to trade Payton. 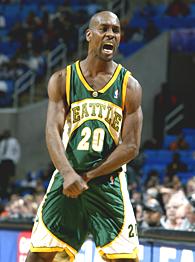 To do so, he found out, he also had to trade Desmond Mason, a player who had become like a son to Schultz, who embodied the qualities that Schultz saw in the consummate NBA player, a man Schultz said repeatedly would be a cornerstone of the franchise's future.

Schultz ultimately decided he disliked Payton more than he liked Mason, and so, like Abraham, he was willing to sacrifice his son. It was the beginning of the downward spiral.

It took a deeper turn that summer, when the team became embroiled in contract negotiations with Rashard Lewis, who up until that point had always been a model citizen, quiet, respectful and professional.

Schultz accompanied a Sonics negotiating team to Texas to meet with Lewis, his mother and his agents. When the sides sat down, Lewis had a baseball cap pulled down over his eyes. He never looked at Schultz and never spoke, something that Schultz took as a personal affront and a sign of disrespect.

"In my business, that's not how we do things," Schultz would later say, referring to the like-minded negotiations he regularly undertakes as the head of Starbucks.

Though the contract was ultimately resolved, Schultz never forgot that initial meeting, and he never really forgave Lewis for how the entire negotiating process was handled.

That season, Schultz attended a Sonics game in Phoenix. As he watched courtside, Lewis had the opportunity to seal a game with free throws in the final seconds. Lewis missed both, the Sonics lost the game, and the contempt Schultz felt for Lewis then was visibly palpable.

It was not difficult to decipher that Schultz was thinking, "That guy had the guts to demand more than $60 million and he can't even hit two free throws? What kind of business did I get myself into where I am forced to pay a 25-year-old kid that kind of money and then watch him fail to produce? Worse, he doesn't even seem to care." 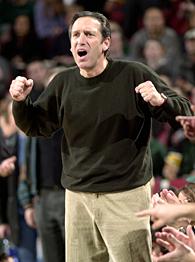 As the losses mounted, so did Schultz's residual bitterness, to the point where his courtside jumping jacks soon became slouches, almost to the extent that he was virtually lying supine in a folding chair. His wife noticed, the fans noticed and his players certainly noticed, to the point that they commented about the negative impact it had on their energy and their psyche.

If those things served to sour Schultz on the NBA, it also laid the foundation for what led to his decision to sell the team: his dealings with the city of Seattle and the state of Washington concerning a new or renovated arena.

This is where Schultz's Starbucks experience ultimately backfired. Though the company has a board of directors and Schultz says he is the head of global expansion, Starbucks is Schultz's fiefdom. What Howard wants, Howard gets. He has ruled it by instinct, and he has been wildly successful.

Schultz apparently thought that when he requested public funds for a new arena, politicians and fans were going to acquiesce to the power and intelligence of Schultz with no reservations, in the same manner that his Starbucks employees are required to obey his commands.

After all, the city had given the Mariners and Seahawks new stadiums. Schultz's endeavor was losing money, and it deserved to be bailed out as well.

When he did not get cooperation from the city or the state, he was aghast. When politicians suggested the Sonics did not mean as much to the area as Schultz thought they did, he was horrified. And when the public said they did not want to help billionaire owners get out of their own bad investment, he was nonplussed.

Four days before the Seahawks were going to play in the Super Bowl, Schultz made a major public-relations blunder by threatening to move or sell the team if his demands were not met, not only detracting from the feel-good story of the city's long-embattled football team but looking like a spoiled brat at the same time: "What do you mean I can't have what I want?"

When the state legislature rejected Schultz's demands for public subsidies in February, that was the tipping point for Schultz; he was going to sell the team.

The organization said it would explore all options for getting a new arena, but in reality it did not. It still has not tried to pair with Bellevue, a Seattle suburb, and approach the state legislature. It never said it would increase its own contribution to the project. In fact, it ignored three proposals recently submitted by the city of Seattle for a renovation.

Basically, Schultz wanted out. His investment -- an expensive toy -- was not what he thought it would be. He could not change the attitudes of NBA players. He could not get the fan base to support his team the way Europeans support their soccer teams. He was unable to persuade politicos to bail him out of his financial morass.

In short, he failed. Yet he is not willing to admit it. There are scapegoats at his disposal, somebody or something to whom he can shift the blame and justify his decision: the city council, the state legislature, the public.

Not everybody in the Sonics' ownership group wanted to sell the team. They wanted to see it through until the end, explore every option. But Schultz put this thing together, and he wielded the power to tear it apart. And the fact that his decision means the very organization that he was going to make the model NBA franchise is now going to leave town (count on it) meant absolutely nothing to him.

In fact, at the news conference announcing the sale, he almost seemed to revel defiantly in the one-upsmanship: "See, I told you if you didn't give me what I wanted, I would move or sell the team."

On that day in 2001 when Schultz purchased the team, he spoke of his memories of going to Knicks games in the Garden when he was a kid, sitting in the upper reaches of the grand old arena with his late father, a sympathetic figure throughout his life.

Back then, his father would have been proud of him. I wonder what he would think of him now.

Frank Hughes covers the NBA for The News Tribune of Tacoma, Wash.