Sometimes, the losses hang with you, like a persistent, nagging cough. The really gruesome ones follow you into the yard, the shower, to the dry cleaners, past the shelf where the NBA Finals MVP trophy and the championship photographs sit. Once they permeate your dreams, you realize you have no choice other than to turn on the DVD player and relive the whole mess all over again.

"That's what I did," Detroit guard Chauncey Billups said. "I put in Game 6 [of the 2006 Eastern Conference finals] to see if it was as ugly as I felt it was. 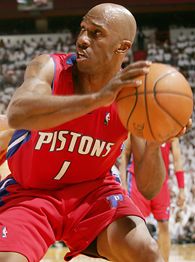 "I didn't really need to watch. I remembered every play in the game anyway."

As he sat in his darkened basement, alone, rewinding and fast-forwarding the misfortunes of his basketball team, Billups winced at the number of jumpers he missed -- and the alarming number he simply didn't take.

"It was just a painful experience," he said. "To see how far we had come, and then to watch that.  I didn't play well when I should have. None of us did."

The postseason had begun with such promise. The Pistons easily dispatched the Milwaukee Bucks in the opening round, then survived the playoff debut of LeBron James by squeezing past the Cleveland Cavaliers in seven games.

But in Game 1 of the Eastern Conference Finals, the Miami Heat stunned Billups' heavily favored Detroit Pistons 91-86 at the Palace. Billups submitted 19 points and 7 assists, but was an uncharacteristic 6-of-19 from the floor.

He finished the series shooting 39 percent, including 25.9 percent from the 3-point line. Even more damning, the normally unflappable leader seemed tentative, unsure. His knack for pushing the ball in transition vanished (Detroit scored just six fast break points in Games 1 and 2 combined), and his sudden hesitancy to step up and drain the perimeter shots puzzled even his most ardent admirers. Mr. Big Shot had morphed into Mr. Big Flop.

With Ben Wallace and Rasheed Wallace (who was suffering from a balky ankle) failing to provide their usual defensive intimidation and Richard (Rip) Hamilton proving to be inconsistent offensively, the Pistons fell into disarray. Both Wallaces grumbled about coach Flip Saunders' game plan, and Billups implored them both publicly and privately to cease the finger-pointing.

In the 95-78 Game 6 loss, which eliminated Detroit, Billups missed 11 of 14 shots and turned the ball over five times.

"It's tough because I really feel we've had the best team in the league for three years in a row, and only one championship to show for it," he said.

When he finally reviewed the Game 6 debacle, Billups was surprised at how many times he pulled back and passed the ball, rather than take the shot at critical junctures.

"I did hesitate to shoot a few times in that series," he conceded. "When I'm playing great and I'm in my rhythm, and I have an OK look at the basket, I'm taking it.

"But in that series, when I wasn't shooting great, I was passing up the shots for someone else, who might have something better. It's a judgment call."

As Billups' shooting percentage continued to plummet against Miami, his coach steadfastly insisted that his fortunes would change at any moment.

"I believed it," Saunders said. "I'm sitting there on the bench thinking, 'This can't last. He's gonna hit one.'"

"It was just weird," Billups said. "I had such a great [regular] season, and the bar was raised so high. 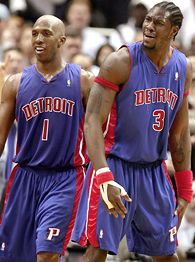 "All of a sudden when I got 19 [points] and 7 [assists], people weren't happy. They thought I should have had 23 and 10. But you know, sometimes that just isn't realistic."

The fallout of the playoff losses reverberated throughout the summer. Ben Wallace filed for free agency, and it quickly became apparent to Billups, who talked to his big man every day, that the Pistons had no intention of breaking the bank to keep a 34-year-old player whose career average was 6.0 points a game.

"Obviously, I wanted him to stay here," Billups said, "but there came a time when it would have been selfish of me to ask him to take less money. He earned it. He deserved it. I just wish it was in Detroit."

Wallace signed with Chicago. The Pistons countered by signing Nazr Mohammed. The move was met with stunned silence from their loyal fan base.

Saunders, the soft-spoken coach who absorbed so much criticism in the wake of his team's inability to reach the Finals, rejiggered his staff, adding assistant Terry Porter and Dave Cowens, two no-nonsense NBA alums who provide a credible voice and a bit of an edge.

Billups will have his own decisions to make this summer. He can opt out of his contract and become a free agent, and already has been linked to Milwaukee, which will have ample cap room come July 1. Billups insisted any talk of changing teams is premature. He already has played for five franchises in his career, and that, he said, is too many.

"I love Detroit," he said. "The people love us here. They treat us like gold. And I'm finally stable for the first time in my career. It's the difference between being a really great player and feeling at home, and being a really good player who mentally doesn't ever really know where he's at.

"I'd like to stay here. But you know and I know this is a business. I'm no different than anyone else. I like to be appreciated."

Billups has braced himself for an uneven start to the 2006-07 season. His team still instinctively funnels offensive players to the middle, where Ben Wallace often swatted away or altered most offerings. In his absence, the Pistons gave up a staggering 70 points in the paint on opening night against the Bucks.

That same evening, Rasheed Wallace was ejected from the game, one of the first casualties of the new rule implemented to limit the amount of complaining to the officials. Wallace, who reported to camp overweight and poorly conditioned, snidely referred to it as "Sheed's Law."

"I don't judge Sheed," Billups said. "I still think he's the best player on our team.

"The problem is he's so emotional. He's been like that since he was 10, 11 years old. How are you going to tell him not to be emotional? At the same time, it's a rule now. So be emotional, and move on.

"I can understand why it's a struggle for him. He's been the same way his whole life. If you ask me to change after 25 years, I'm not sure I could."

The Pistons would love Billups merely to revert to his regular-season form of one year ago, when he averaged 18.5 points and 8.6 assists, was one of the league's top defenders, and earned second-team All-NBA honors.

"I don't feel like I have anything to prove," Billups declared. "But I learned a long time ago not to let my guard down. Things change in this league fast.

He remembers how he felt in 2004 when Detroit won it all. The victories still remain a far more powerful memory than the losses.

"You can't describe the feeling to anyone who hasn't experienced it," he said. "It's just unreal. Everything you throw up goes in. You can tell [Miami guard] Dwyane Wade was in that kind of zone last year. I've had a few of those games when I've felt like 'Nobody can stop me.'

"It's all mental when you get to that point. If you believe nobody can defend you, then nobody will."

Billups suggests we check back with the Pistons in 20 games. By then, Sheed will be in shape, the team will have adjusted to life without Big Ben and Mohammed will have acclimated himself.

"I like what we've got," Billups said. "And I love how we're viewed. People don't think anything of us. We're great when we are predators, instead of the prey."

The disappointments of playoffs past, he insisted, no longer haunt him. It's a new season, a new team. The nagging cough is gone.

And so is that DVD of the Eastern Conference finals.

Jackie MacMullan of The Boston Globe is an NBA columnist for ESPN.com.