BOSTON -- Kobe Bryant shifted the ball precisely to where he desired it to be -- in his hands, on the way to the hoop, in complete control of a two-on-one fast-break opportunity against the San Antonio Spurs.

The easiest path to the basket was obvious. All he had to do was keep the ball, be Kobe, inflict the kind of physical and emotional damage that only the truly gifted can wield, then effortlessly glide back down the floor on defense. 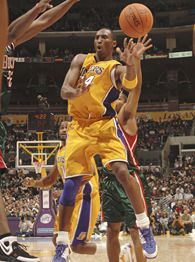 "I thought about it,'' Bryant confessed. "I knew I could have just jumped over Tony Parker and scored.''

His instincts urged him in that direction, but instead Bryant hesitated -- and then did a most curious thing.

He slowed down, held up, and almost pulled back before dishing the ball to teammate Maurice Evans. The fourth-year journeyman bobbled it momentarily before finishing off the play.

"If he drops it,'' said Bryant, chuckling, "[Lakers coach] Phil [Jackson] is going to be shouting to me, 'Kobe. Just take it to the hole!'''

Bryant can score just about whenever he wants. That has been true since he was 11 years old and schooling teenagers on the playground. It was still true Jan. 28, on that fast break against the Spurs.

He proved it last season, when he led the league in scoring with a career-high 35.4 points a night, dropped 81 points on Toronto, and was branded a gluttonous athlete who already had secured his quota of championship hardware and was now enamored with compiling gaudy statistics.

See? Told you Kobe was selfish.

"It was hurtful to hear that kind of stuff,'' Bryant said. "Did they think this was something I all of a sudden discovered I could do? I've been able to put up points since the day I walked into this league. But, in the past, I deferred from doing that to win championships.

"It was necessary last year for me to score. We had a new system and too many young new players. Phil and I discussed it. He told me, 'You are going to have to shoulder the load until everyone else catches up.'''

He shouldered the load; they didn't catch up. He kept shooting, had fun doing it. His image, already in tatters from a very public and humiliating trial for allegations of rape, took a nosedive on the court as well.

Jackson scolded him for fixating on the criticism. A true leader, he lectured, was impervious to outside distractions.

While Kobe was contemplating and eventually would undergo knee surgery, former Lakers teammate Shaquille O'Neal won another ring, this time with Miami. He deferred to young Dwyane Wade with considerable fanfare and revealed, "I took D-Wade out to a bar and told him I wouldn't let us end up like me and Kobe.''

Does Kobe take Andrew Bynum, the young Lakers center, out to his favorite watering hole and implore him not to let them end up like him and Shaq? No. That is not how he thinks. 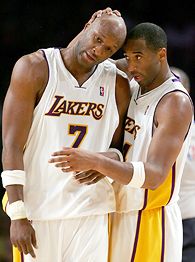 Yet L.A.'s crown jewel said he has recognized the importance of sharing the ball, the glory and the glare. The Lakers' success this season is critical to Bryant's own image. He is 28 years old and wants -- needs -- to reinvent himself. If this green Lakers team can enjoy any kind of meaningful success, it could well be his passport to redemption.

"It's about us getting better, not me being a crutch for us as a team to rely on when we struggle,'' he said. "We've got to stick to the plan.

"Sometimes, when we start going bad, I'm thinking, 'We've got to hunker down and do this together.' They're looking at me and saying, 'C'mon, get us 60.'''

The preseason buzz on the Left Coast may have centered on the Los Angeles Clippers, who were the trendy pick to submit a breakout year. Instead, the Clips are hovering around .500 (24-23 at the moment), and the Lakers have quietly assembled a 30-19 mark. While Kobe remains the centerpiece, his mission, he said, is to spread the wealth.

His opponents have duly noted the shift.

"He's the most talented player in the league,'' Spurs coach Gregg Popovich declared. "He's no longer just an athlete getting points. He's an intelligent player trying to help his team win.

"He is trying to make that transition to the team player who makes everyone better. You know, the Michael thing.''

It always comes back to Jordan. His Airness and his steely approach to the game earned him six championship trophies, and until someone else equals or surpasses his collection, he remains the barometer of greatness.

Kobe aches to do what Michael did (who doesn't?). He yearns to be revered, wants to prove he can influence the young talent around him.

To do so, he must shake his reputation as an aloof, solitary player who leaves that lingering feeling that he is just a little better than you. Shaq's knack, in spite of his Hall of Fame résumé and massive personal presence, has been his ability to convince you he's just one of the guys.

By the time O'Neal orchestrated a trade out of Los Angeles in 2004, growling with anger and indignation that the Lakers chose to build their future around Bryant, the relationship between the two stars was beyond repair.

Kobe knows the answer. The deep freeze between the two superstars was personal, so personal that others were forced to choose between them. You couldn't back both. The stinging public barbs traded between the two only added to the intrigue.

"That's the one thing I regret,'' Bryant conceded. "I regret responding to the things Shaq said. It's just that he kept talking and talking, and finally I said, 'Enough.' And I vented. Looking back, I wish I had kept my mouth shut.''

O'Neal's frustration with Bryant was further validated in a book by Jackson, who skewered Kobe so thoroughly it was nothing short of stunning when he returned after a sabbatical to coach Bryant again.

They are in this together now, both faced with the task of proving their success in L.A. wasn't tied solely to the center with the Superman tattoo. Phil and Kobe, the Sequel, was a marriage of convenience; but upon further review, it just might work out after all.

"Phil and I have done a 180,'' Bryant said. "We're very close now. I'm grateful. I always wanted to have this kind of relationship with him, but because of past team dynamics, it just wasn't possible. I trust him. He trusts me. That's huge.''

Jackson has passed out the obligatory motivational books to Kobe and stressed the need to let others flourish through his energy.

"It's a matter of giving up control, and that's not easy for any elite player,'' Jackson said. "Kobe is learning to empower other people. It's a work in progress.''

Bryant reminds his young teammates he averaged 15 minutes a game as a rookie and can sympathize with their struggles to earn consistent playing time.

"I remember Devean George telling me, 'You came into this league with a silver spoon in your mouth,''' Kobe says. "I told him, 'Your history isn't so good. Check the books.'''

Tweaking his game has been alternately rewarding and exasperating for Bryant. He talks to former Lakers general manager Jerry West at least once a month about the transition, and he said he has been exchanging text messages regularly with Jordan.

"Michael has told me before, 'You have all the tools. The mental part of how to elevate your teammates is the last piece you have to master,''' Bryant said. "I find [getting players involved] requires me to be more focused than usual.

"When I'm scoring, I have a narrow, laser focus. I get totally lost in the rhythm of shooting. But when I'm facilitating, I have to take a step back and look at a much broader picture. I have to wait for things to develop, or make them develop. It takes patience.''

The new Kobe is still a reclamation project of sorts. There are those who will forever maintain he got away with one of the most heinous of crimes, even though the criminal complaint against him was dropped in September 2004 when the alleged victim ultimately decided against testifying. At the very least, Bryant was an icon caught being unfaithful to his young wife, which doesn't play all that well on Madison Avenue. 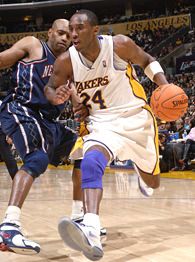 This season, Kobe shed his No. 8 and now wears 24, his high school jersey number. He said the added significance is simplistic: 24 hours in a day, one day at a time. It is currently the top-selling jersey in the NBA.

"Everyone says I changed my number to make more money,'' Kobe said. "Those people are forgetting I'm a Nike athlete. Adidas owns the NBA jerseys. That doesn't help me any.''

You want to help Kobe? He needs to convince Kwame Brown to be more consistent and less concerned with criticism, so he told him to stop placing unrealistic expectations on himself.

"I explained to him this isn't like it was for him in Washington,'' Bryant said. "Here, all the pressure falls on me. Nobody else.''

Here's what else Kobe needs: for big man Bynum to be a more imposing inside defensive presence. So Bryant suggested he pull some Hakeem Olajuwon films out of the archives and study how he blocked shots. Told him he'd be happy to watch with him.

"I didn't even know I could do that,'' Bynum said.

The rewards can be elusive. When Bryant passes up two easy points then watches the ball bounce off a kneecap, slip through a pair of paws, or clang off the rim, he realizes to his own horror that at times he is grimacing.

"You can see the frustration from time to time,'' Popovich said. "If they don't complete the play, it's there, on his face. But he's putting his trust in them. He's making more of a concerted effort to touch players, pat them on the back, to engage them. He's been much more outgoing.''

"I don't know what happened with Kobe in the past,'' teammate Sasha Vujacic said. "I only know what I see now. I see a leader, a great player who wants to help.''

Wednesday against Boston, Bryant returned from his one-game suspension for elbowing Spurs guard Manu Ginobili and took out his frustrations on the hapless Celtics. He torched them for 43 points, including a long 3-point bomb at the buzzer to end the third quarter. He exploded with an array of dazzling athletic moves to help the Lakers pull away in the fourth quarter, but not before he drew three defenders, then dumped it off to Bynum in the post. The big man was so startled he lost possession of the ball.

"Once in a while, I'll look at them in the middle of a game and say, 'I've been carrying you guys for the past five minutes. How about you guys join the party? Pull up a chair,''' Bryant said. "They just smile. But that's when I tell them, 'C'mon, now. I'm serious. Let's go.'''

The Lakers are not on par with Dallas or Phoenix or San Antonio, and while Bryant might be the most talented player in the league, he likely will not be crowned the Most Valuable Player this season.

Those awards are for contenders, who elevate themselves and those around them.

Kobe Bryant desperately wants to get there. He's just not sure yet how to bring the rest of the team along with him.

Jackie MacMullan of The Boston Globe is an NBA columnist for ESPN.com.