We are three weeks shy of the first anniversary of one of Danny Ainge's most controversial decisions in his role as the Celtics' hoop el jefe. In short, Ainge broke up a team on a five-game winning streak, a move which eventually torpedoed the 2003-04 season and cost him the best coach the team had had in a decade.

Six players were involved in the deal, but one player essentially drove the deal from both sides: Ricky Davis. Ainge wanted him. The Cleveland Cavaliers wanted no more of him. Deal done.

What does it say that, 49 weeks later, on the night of the Cavs' only 2004-05 visit to Boston, Davis is the only one of the six still on the active roster of either team? It says in part that the Celtics are willing to stick with the ultra-athletic swingman with a history of -- to be polite -- goofball behavior because he has potential and he's still only 25. (Until "The Brawl," Davis was seen in some circles as Artest Lite. Now that seems a bit too harsh.) 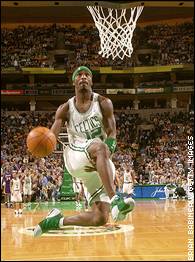 All three ex-Celtics who went to Cleveland that day -- Eric Williams, Tony Battie and Kedrick Brown -- are elsewhere. One of the ex-Cavs who came to Boston -- Chris Mihm -- is gone and another -- Michael Stewart -- is forever stuck on the Celtics' injured list until Ainge can find a taker for him and his attractive, expiring contract.

Ainge willingly took the heat for importing Davis and still endorses the move, despite the immediate consequences. (In Boston basketball circles, Dec. 15, 2003 is known as The Day The Music Died.) There's no mystery here: Davis has a track record as a coach killer and one of his many ex-NBA coaches called him "The Devil." Paul Silas would have paid cab fare to get him to the Cleveland airport -- the deal was addition by subtraction from the Cavs' standpoint -- and neither Jim O'Brien nor John Carroll ever got through to Davis, who, late in the season, willingly blew off a team dinner to go for a boat ride in Miami.

Davis represented everything that is wrong with the NBA -- he was too young, too undisciplined, too selfish, ultimately uncoachable. Go to the Ricky Davis player file site on NBA.com and you'll see a picture of Davis preparing for a dunk by going between his legs. Fair or unfair, that was how many saw him.

But he had undeniable talent, so there always would be a taker for his services in a league where everyone believes they can do it better than the previous guy. Ainge was merely the latest to make that gamble and, in trying to build a young, athletic team, Davis was a natural. That the trade forced out O'Brien and turned off many of Davis' teammates was a minor impediment to the Big Picture.

And the Big Picture went something like this: put Davis into a situation where he can be one of many weapons, with a coach (Doc Rivers) he respects and knows is going to be around, on a team that won't lose unrelentingly (or so it's assumed), and, at a position where he can showcase his considerable talent while also losing the attitude.

It's still very early in the 2004-05 season and the Celtics are not off to a very encouraging start. They're not rebounding well. Paul Pierce too often looks as though he's just been told his dog has died. Gary Payton is already mad about having his minutes cut in the loss to Philadelphia on Thanksgiving Eve. Promising rookie Al Jefferson is losing minutes to Walter McCarty and another promising rookie, Delonte West, has yet to play due to injury.

But the Celtics do have reason to be encouraged by Davis. He is the least of their worries now. 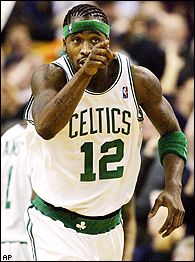 Think Cary Grant with hops, cornrows and a solid midrange game and you've got the November 2004 Ricky Davis.

Davis showed up well before the start of training camp to work out with his teammates. He has been a model citizen on and off the court; there hasn't been a single, superfluous showboat dunk or schedule lapse. In the first 10 games, he averaged 16.6 points, 3.3 rebounds and 2.2 assists while shooting a remarkable 53.7 percent from the field. He is second only to Pierce in scoring and minutes.

Ordinarily, that should put Davis in a pretty comfortable position on the team. But this past week, he accepted and even embraced a decision by Rivers that in years past might have pushed Davis over the proverbial edge: he was taken out of the starting lineup and given the Sixth Man role.

Most players want to start. They will tell you that it matters only who finishes, or how many minutes they play, but, in reality, they all want to start if they think they're good enough. Davis earned his starting role, beating out Jiri Welsch. But when Rivers saw Welsch drowning on the second unit, he made the switch. Davis didn't make a peep and, in fact, went straight to Cliché Central when asked about the move.

"It's a good thing," he said. "I can keep the bench up, get the second squad going. But it doesn't really matter as long as I'm out there, playing. I'm just focusing on coming in, playing my game, trying to get victories."

And here's what he's done off the pine: 21 points per game on 60 percent shooting from the field. So far, so good.

But the real test for Davis lies not so much with what he does, or continues to do, but in what his team does. His unfortunate history has labeled him as a player who puts up nice numbers for bad teams. It's not his fault solely, of course, but that has been his history.

You can be sure that Silas didn't stop by Davis' house for turkey and cranberry sauce yesterday. Cleveland seems to be doing fine without Davis -- and with LeBron James. But where Silas didn't, the Celtics, for now, seem to have gotten through to Davis, and Davis seems to have bought into the system.

It's a long season and much can still happen. But if you thought the 2004-05 Celtics might have some problems early on, the skeptic in you would be thinking that Davis would be at or near the root of them. He's not. He's doing a very nice job of image rebuilding at a time when he really couldn't afford anything short of an image overhaul.

Peter May, who covers the NBA for the Boston Globe, is a regular contributor to ESPN.com.