The firing of Isiah Thomas by the Indiana Pacers is no surprise when you look at the factors involved.

First, Larry Bird was named Indiana's president of basketball operations seven weeks ago, three-plus years after he coached the Pacers to the 2000 NBA Finals. This firing should be seen as Bird clearly putting his stamp on this team once more.

But this isn't a case of Bird making a rash decision just to shake things up. He took seven weeks to make this move, which indicates he took time to evaluate the situation to its fullest. 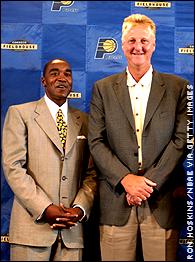 There may be talk that personal animosity between Thomas and Bird was the reason for Thomas' firing, but that's hogwash. Bird is all business. If he thought Thomas was a highly competent coach, any past personal incidents would be put aside. Winning is paramount to Larry Bird.

Second, the Pacers never realized their potential under Thomas. For three years, they hovered around success but never truly achieved it. As Thomas' 131-115 record proves, Indiana bordered on the line of mediocrity rather than high accomplishment. This past season, the loss to the Boston Celtics in the playoffs really hurt Thomas' status with the team and the community.

Indiana was expected to contend for the Eastern Conference championship -- not to be bounced out in the first round of the playoffs. Coaching is a tough business, and the coach takes the brunt of the criticism from the fans and media. If the team doesn't reach expectations, he must shoulder the responsibility.

Also, there was innuendo by those close to the team that Thomas' work ethic left something to be desired. With a boss like Bird, a man known for his amazing work ethic, anything less than 100 percent effort would be unacceptable.

Speculation regarding Indiana's next head coach will center on Rick Carlisle, who was fired as the Detroit Pistons' head coach this offseason. Carlisle was an assistant with the Pacers under Bird, who regards him highly and wanted him to take over when Bird stepped down as coach three years ago.

Instead, Carlisle was passed over for Thomas and became the head coach in Detroit, where he thrived. Don't underestimate how much Carlisle's availability affected Bird's decision. It's much easier to fire a coach when you believe a better one is out there for the taking.

In the end, the only surprising part of Thomas' firing is the way it happened. If not for Larry Brown's availability -- and subsequent hiring by the Pistons, after Carlisle's dismissal -- Thomas may still have his job. Instead, the man he beat out for the Pacers' job three years ago might replace him.