Well, I guess this means that Benny The Bull will have to handle all the personal appearances from now on.

By now, you've heard that Da Bull, the Chicago Bulls' other mascot, allegedly was caught with six ounces of pot that police say he intended to sell outside the Cabrini Green housing project. 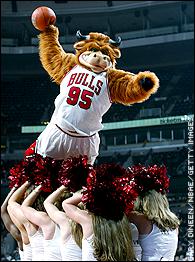 OK, not Da Bull himself, and we mention that only to quell the influential mascot lobby. The guy who fills the hallowed Da Bull suit was the one arrested, and the sanctity of Da Bull is thereby preserved.

At least, we think so. In a story this huge (read: hilarious), you can never tell what the blowback (read: jokes on the radio) will be.

How many children, unable to separate one mascot from the next, will be horrified at games? How many parents will cancel the mascot appearances at their children's birthday parties? How many fans, when they win a small pizza because their team scores 100 points, will paw frantically through the cheese looking for extra secret ingredients?

I mean, how much damage has this man wrought?

Now like any good and proper journalist, I believe to the very depths of my soul that a bounty should be placed on most mascots -- say, like the two cents placed on rabbits in the famous Bugs Bunny cartoon of the early '50s. I mean, you could make a promotion out of it.

That having been said, it must be admitted that mascots do resonate with a certain segment of the population -- that all-important 3-to-8 demographic. Younger than 3 years old, and the children are scared half-dead. Older than 8, the children are trying to figure out if the costumes are flammable -- in that special way.

And most parents who bring their young and impressionable charges to a game at the usual exorbitant ticket-and-eats rates are unlikely to get terribly excited when a mascot comes up to give their child a hug during a timeout: "Quick, Martha, search little Tad. He might have planted some sale weight on him somewhere.''

I mean, if that doesn't suck the fun out of an arena sight gag, what does?

Now before you mascots out there indundate us with e-mails protesting that we paint with too broad a brush here, remember two things. We're not going to read your e-mails, so leave us alone.

Besides, we're on your side. True, you serve no useful purpose in the entertainment industry. True, you occasionally obscure the sight lines of fans who paid $130 to watch the game, the cheerleaders or the guy selling gin-and-tonic-on-a-stick bars. True, you are badly shaped, often unfunny, wear the most garish costumes and, all in all, are cornea-searing, life-denying nightmares of the first order.

But as near as we can tell, most of you don't move dope, at least not on the job.

Still, you do need to be cautioned that your job is about to become a little bit harder. Well, a lot harder.

Customers may be a little skittish for awhile because of this, and you need to be understanding of their hesitation. If you are suddenly grabbed by a security guard for a hard frisk, don't cop an attitude. If you are asked to give four urine samples in nine minutes, drink plenty of fluids. If you find that some adults are becoming inordinately friendly with you, or start asking if you brought any Chee-tos, jolly them along and keep the sarcastic retorts to yourselves.

You are being tarred by a brush you do not deserve. Then again, life's a bitch and then you get your property tax bill. Fair's got nothing to do with it.

Just remember you are upholding a proud tradition (well, it's not completely offensive), and you are part of a great industry (well, it's not utterly repugnant). These are hard times facing you, and you will have to persevere.

When you are the butt of a cruel joke, smile, if your costume so allows.

If children run from you, remember they are only doing as their parents told them to do.

If present and former members of the Portland Trail Blazers ask you, "How's tricks?'' take the Fifth.

If you also work on the creative end, do not pantomime a pothead.

Whatever you do, don't miss two trampoline dunks in a row.

Always carry a supply of "The [fill in mascot's name] Says Just Say No'' T-shirts for distribution.

Do not respond when a heckler asks if you are supposed to be Cheech or Chong.

Eventually, this will all blow over (no pun intended). Your industry has been scandal-free up until now, and you can endure. If not you, who? If not now, when? If not a hideously unfunny timeout skit about you subpoena-ing an Ottawa Senator, or walloping a guy in a leprechaun suit with a papier-mache shillelagh, then what?

Besides, it could be a hell of a lot worse for you. You could be the Stanford Tree right now, knowing that some wise guy is going to try to tackle you in hopes of a contact high.

Ray Ratto is a columnist with the San Francisco Chronicle and a regular contributor to ESPN.com.